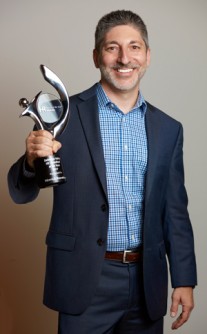 Merrick Rosenberg, recipient of the 2017 HR Consultant of the Year Award. 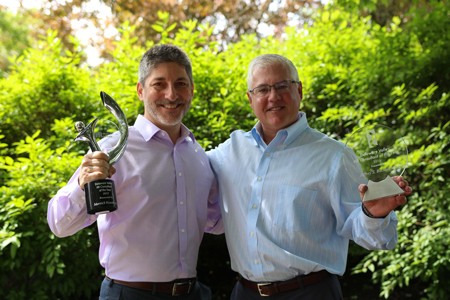 Take Flight Learning’s CEO and co-founder Merrick Rosenberg, shown here on the left, is the 2017 recipient of the HR Consultant of the Year Award. On the right, Take Flight Learning President and co-founder Jeff Backal, also received the award in 2011. The Delaware Valley HR Person of Year Awards – which include “HR Consultant of the Year”, “HR Rising Star of the Year,” and “HR Person of the Year” – spotlight the region’s human resources industry and recognize the HR professionals who exemplify performance excellence and outstanding achievement in the field.

Newswise — MARLTON, NJ – June 1, 2017 – Merrick Rosenberg, CEO and co-founder of Take Flight Learning (TFL), the leading DISC training company in the United States, is the recipient of the 2017 HR Consultant of the Year Award. Developed in 2001, the Delaware Valley HR Person of the Year Awards – which includes “HR Consultant of the Year”, “HR Rising Star of the Year,” and “HR Person of the Year” – spotlight the region’s human resources industry and recognize the HR professionals who exemplify performance excellence and outstanding achievement in the field.

“I am honored to be selected as HR Consultant of the Year,” said Rosenberg upon winning the award. “But this award does not just belong to me. This is what happens when you surround yourself with amazing people who share the same passion for helping people to transform their lives.”

To be considered an “HR Consultant of the Year” candidate, an individual must demonstrate “excellence either by creative and innovative development of new ideas and programs or by the highly effective utilization of well-regarded principles” in the human resources arena.

In keeping with these criteria, Rosenberg, reinvented the DISC model by representing the personality styles with four birds (Eagles, Parrots, Doves, and Owls) instead of letters. This approach enables people to readily remember the personality styles and apply them to daily interactions with family, friends, and co-workers.

Rosenberg created a series of training programs, including Taking Flight with DISC, ReDISCovering Conflict, and Chameleon Selling to teach the DISC personality styles. He first introduced his reimagined approach to personality in his book Taking Flight!, Master the DISC Styles to Transform Your Career, Your Relationships...Your Life. Building upon his earlier work, he then authored The Chameleon, Life-Changing Wisdom for Anyone Who Has a Personality or Knows Someone Who Does.

Corporate Vision (CV) Magazine writes, “By representing the styles with visually appealing Eagles, Parrots, Doves, and Owls, not only do the styles come to life, but people can more easily identify with the characteristics typically associated with the birds. The birds imprint upon the mind and users retain style insights more effectively with the birds than with the letters D-I-S-C.”

CV Magazine recognized Taking Flight with DISC as the Best Personality Styles Training Program in the United States as part of its 2016 HR & Training Awards.

Rosenberg co-founded Team Builders Plus, the largest team building company in the United States, in 1991 with President, Jeff Backal (a 2011 HR Consultant of the Year Award recipient), and Take Flight Learning in 2012.

Under Rosenberg’s leadership, his organization was selected on multiple occasions by the Philadelphia Business Journal as one of the Fastest Growing Companies and Best Places to Work in the Philadelphia region.

Considered a go-to authority in personality training, Rosenberg regularly shares his knowledge and expertise through a variety of mediums – from authoring books, public speaking, and leading training programs – to engaging in social media (@MerrickR; Facebook.com/TakeFlightLearning; linkedin.com/in/MerrickRosenberg; and YouTube). He has led DISC training programs for more than 30,000 people and spoken to tens of thousands more on how to incorporate the personality styles into one’s work and personal life.

Interacting with people on all levels – from line staff to senior managers – Rosenberg has worked with more than half of the Fortune 100 companies in the U.S. and around the world. He continues to work with organizations of all sizes and in a variety of industries.

In addition to speaking at conferences and events for companies, Merrick has been invited to speak to groups such as: TEDx, the Association for Talent Development, the Project Management Institute, the International Society for Performance Improvement, the Employer’s Council, the American Society for Quality, Vistage International, the President’s Club, Pharma Forum, and Young Associates. Rosenberg also donates his time to the Society of Human Resource Management and has spoken at all seven of the chapters that joined together to create the HR Person of the Year Awards.

Rosenberg received his MBA specializing in Organizational Development from Drexel University, where he was selected as the Alumni Entrepreneur of the Year. An engaging speaker and presenter, he is a regularly sought out by the media for expert commentary, Rosenberg has appeared in such outlets as The New York Times, Fast Company, Fortune, Huffington Post, Forbes, The Herald Tribune, The Wall Street Journal, InformationWeek, Inc., Parents, and Glamour magazine.

Based on more than two decades of experience with the DISC styles, Take Flight Learning is the leading DISC training company in the Unites States. After training tens of thousands of people in the DISC styles, CEO Merrick Rosenberg breathed new life into this age-old model by linking the styles to the birds in his books, Taking Flight! and The Chameleon.

Take Flight Learning offers a variety of DISC training programs, products, services and keynote speaking. DISC sessions can be conducted for organizations (including programs for individuals, teams, leaders, salespeople, and educators), and trainers (through the Take Flight with DISC Certification).