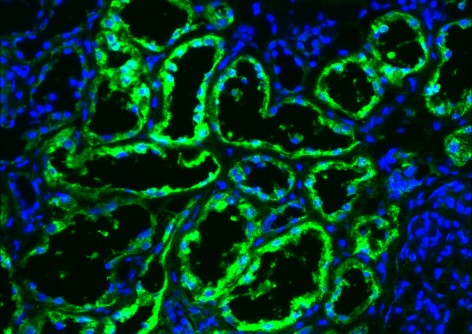 Newswise — PHILADELPHIA -- In an analysis of small molecules called metabolites used by the body to make fuel in normal and cancerous cells in human kidney tissue, a research team from the Perelman School of Medicine at the University of Pennsylvania identified an enzyme key to applying the brakes on tumor growth. The team found that an enzyme called FBP1 – essential for regulating metabolism – binds to a transcription factor in the nucleus of certain kidney cells and restrains energy production in the cell body. What’s more, they determined that this enzyme is missing from all kidney tumor tissue analyzed. These tumor cells without FBP1 produce energy at a much faster rate than their non-cancer cell counterparts. When FBP1 is working properly, out-of-control cell growth is kept in check.

The new study, published online this week in Nature, was led by Celeste Simon, PhD, a professor of Cell and Developmental Biology and the scientific director for the Abramson Family Cancer Research Institute at Penn.

Clear cell renal cell carcinoma (ccRCC), the most frequent form of kidney cancer, is characterized by elevated glycogen (a form of carbohydrate) and fat deposits in affected kidney cells. This over-storage of lipids causes large clear droplets to accumulate, hence the cancer’s name.

In the last decade, ccRCCs have been on the rise worldwide. However, if tumors are removed early, a patient’s prognosis for five-year survival is relatively good. If expression of the FBP1 gene is lost, patients have a worse prognosis.

“This study is the first stop in this line of research for coming up with a personalized approach for people with clear cell renal cell carcinoma-related mutations,” says Simon, also an investigator with the Howard Hughes Medical Institute.

A Series of Faulty Reactions The aberrant storage of lipid in ccRCC results from a faulty series of biochemical reactions. These reactions, called the Kreb’s cycle, generate energy from carbohydrates, fats, and proteins in the form of ATP. However, the Kreb’s cycle is hyperactive in ccRCC, resulting in enhanced lipid production. Renal cancer cells are associated with changes in two important intracellular proteins: elevated expression of hypoxia inducible factors (HIFs) and mutations in the von Hippel-Lindau (VHL) encoded protein, pVHL. In fact, mutations in pVHL occur in 90 percent of ccRCC tumors. pVHL regulates HIFs, which in turn affect activity of the Kreb’s cycle.

Although much is already known about metabolic pathways and their role in cancer, there are still important questions to be answered. For example, kidney-specific VHL deletion in mice does not elicit clear cell-specific tumor formation, suggesting that additional mechanisms are at play. Toward answering that hunch, recent large-scale sequencing analyses have revealed the loss of several epigenetic enzymes in certain types of ccRCCs, suggesting that changes within the nucleus also account for kidney tumor progression.

To complement genetic studies revealing a role for epigenetic enzymes, the team evaluated metabolic enzymes in the 600-plus tumors they analyzed. The expression of FBP1 was lost in all kidney cancer tissue samples examined. They found FBP1 protein in the cytoplasm of normal cells, where it would be expected to be active in glucose metabolism. But, they also found FBP1 in the nucleus of these normal cells, where it binds to HIF to modulate its effects on tumor growth. In cells without FBPI, the team observed the Warburg effect – a phenomenon in which malignant, rapidly growing tumor cells go into overdrive, producing energy up to 200 times faster than their non-cancer-cell counterparts.

This unique dual function of FBP1 explains its ubiquitous loss in ccRCC, distinguishing FBP1 from previously identified tumor suppressors that are not consistently inhibited in all tumors. “And since FBP1 activity is also lost in liver cancer, which is quite prevalent, FBP1 depletion may be generally applicable to a number of human cancers,” notes Simon.

Next steps, according to the researchers, will be to identify other metabolic pathways to target, measure the abundance of metabolites in kidney and liver cancer cells to determine FBP1’s role in each, and develop a better mouse model for preclinical studies.

This work was supported by the Howard Hughes Medical Institute, and the National Cancer Institute (CA104838).