Mexico Well Ahead of U.S. in LGBT Rights 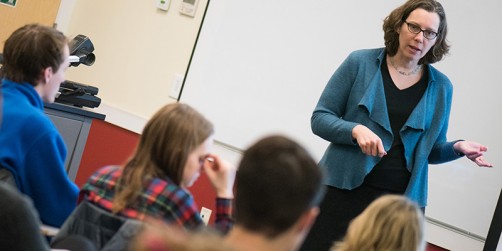 Caroline Beer, associate professor in political science at the University of Vermont, has conducted a number of comparative studies that have challenged previously held assumptions.

Newswise — Caroline Beer has spent her career researching comparative data between Latin American countries and the United States that often debunks false stereotypes. Her latest study showing Mexico as more progressive than the U.S. when it comes to LGBT rights, especially in the recognition of same-sex relationships, is no exception.

The study in the journal State Politics and Policy Quarterly measures the effects of religion, LGBT organizations and left-leaning governors on LGBT rights in both countries. Results show that religion suppresses the extension of LGBT rights in the U.S., but not in Mexico where 80 percent of the population identifies as Catholic. Higher percentages of Evangelical Protestants in areas of the U.S. decreased the odds that legal recognition of same-sex relationships would be extended.

The study also shows that the number of LGBT organizations in a state was predictive of whether same-sex relationship rights were implemented in both countries, though more prominently in Mexico. Having one additional LGBT organization in a Mexican State increases the odds of legal rights for LGBT people by more than 70 percent, compared to just 10 percent in a U.S. state.

Beer based her analysis on national and state-level LGBT legislative activity in the U.S. and Mexico between 2000-2014; data from the International Lesbian, Gay, Bisexual, Trans, and Intersex Association to measure the impact of LGBT organizations on legislation; and U.S. and Mexican Census figures to capture the levels of religiosity by state.

“Given that LGBT social movements are stronger in the U.S., Mexicans are more religious, and a conservative religious party has governed Mexico for the better half of two decades, we would expect to find far greater legal equality for LGBT people in the US,” says Beer, a political science professor at the University of Vermont. “In fact, like a lot of misconceptions about Mexico, that is not the case. Mexico is often perceived as a backwater country that follows the lead of the US, but in reality is very forward-thinking with progressive ideas.”

Left-leaning states like Vermont legislatively on par with Mexican states

The article, “Extending Rights to Marginalized Minorities: Same-Sex Relationship Recognition in Mexico and the United States,” also showed that U.S. and Mexican states with liberal-leaning governors corresponded with an increase in legal recognition of same same-sex relationships. Liberal states like Vermont – the first in the nation to legalize civil unions – were on par with similarly liberal states in Mexico in terms of their advancement of same-sex legislation.

“I spend half my life in Mexico City and the other half in Vermont and although they are completely different in many ways, both are very progressive and known as policy innovators," says Beer. “Vermont totally outplays its size in terms of policy innovation and like Mexico City, which has 20 million people, has created policies that were eventually replicated nationwide.”

Interestingly, the finding that liberal states with left-leaning governors positively increased LGBT-friendly laws on the state-level in both countries did not translate to the national level. Beer points to the fact that the National Action Party (PAN) – a rightist Catholic party – was in power when Mexico passed its national LGBT antidiscrimination policies and constitutional reforms. No such initiatives were even in play when the Democratic Party controlled the U.S. presidency from 1992-2000 and 2008-2016. The U.S. also trails Mexico in the election of openly LGBT politicians.

Historically, Beer says her latest findings should come as no surprise given that Mexico overturned anti-sodomy laws criminalizing gay sex in 1871, more than 100 years before the U.S.. In 2002 and 2005, Mexico passed a national anti-discrimination law, making it illegal to discriminate against sexual minorities; added an explicit protection for sexual minorities to its constitution; and created an anti-discrimination agency that launched a national anti-homophobia campaign.

“The U.S. hasn’t seen anything close to these reforms in terms of fighting homophobia and promoting gay rights at the national level,” she says. “Gay rights activists would say that they are protected by the U.S. Constitution, which I would agree with, but a lot of people don’t agree with that, and it’s not explicit like it is in Mexico.”