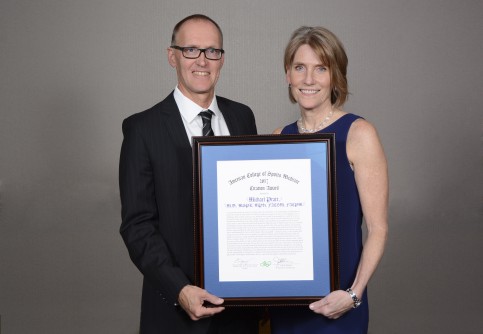 Recognized for major achievements in sports medicine and the exercise sciences.

Newswise — INDIANAPOLIS, IN- The American College of Sports Medicine is pleased to announce that Michael Pratt M.D., MSPE, MPH, FACSM, FACPM is a recipient of its 2017 Citation Award. Dr. Pratt was selected for this award because of his significant contributions to sports medicine and the exercise sciences. He was recognized at an awards banquet during the association’s recent annual meeting.

Dr. Pratt is currently a professor of global health and director of the Institute for Public Health at the University of California, San Diego. He worked at the Centers for Disease Control and Prevention for 28 years, including directing the Physical Activity and Health Branch for five years. His major contributions there included work on the evidence syntheses resulting in major new physical activity guidelines and the U.S. Surgeon General's report in 1996; he directed the World Health Organization Collaborating Center on Physical Activity inside CDC; contributed to developing four widely-used physical activity surveys, guided the CDC-ACSM cooperative agreement, and initiated the Physical Activity and Public Health research and practice annual courses (in partnership with the University of South Carolina) which have been running nationally for  more than two decades. Pratt also contributed to developing research and public health policy networks and programs in Latin America, carrying out population-wide physical activity projects and developing international links to the ACSM "Exercise is Medicine" initiative.

Dr. Pratt is a fellow of ACSM and the American College of Preventive Medicine, has been an ACSM member for 36 years, and has attended more than 25 annual meetings. He was a driving force behind the senior editorial management group of the Lancet Physical Activity series in both 2012 and 2016, and was a formal mentor to nine of the other series authors. Dr. Pratt has contributed extensively to the physical activity-related scientific literature throughout his career, publishing nearly 200 peer-reviewed scientific publications, of which seven have been cited more than 1000 times and 32 have been cited more than 100 times.

Dr. Pratt’s Citation Award is one of six that were given this year. Other recipients include: