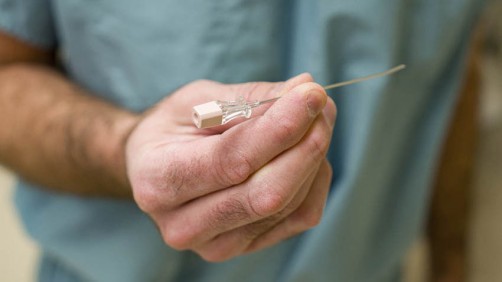 A standard curved needle that has been re-purposed for Jarboe’s incision-less hernia repair surgery.

Newswise — Health care providers are constantly evolving treatments for complicated conditions to provide patients with the greatest amount of benefit while avoiding any adverse effects, like scarring.

Marcus Jarboe, M.D., a pediatric surgeon trained in interventional radiology at C.S. Mott Children’s Hospital, has developed an innovative, inguinal hernia surgery method, which has children walking out of operating rooms with only a few needle pokes to show for it.

According to the American College of Surgeons, 5 out of 100 babies will require this type of hernia surgery, with it occurring ten times more frequently in male infants.

An inguinal hernia, which occurs in the groin, ensues when an area of abdominal muscle tissue, called the inguinal canal, fails to close up while a baby is in the mother’s womb. Not only is the surgery one of the most commonly performed pediatric operations, but the groin is also one of the most common sites for it, according to the American College of Surgeons.

The condition always requires surgical treatment. “Surgery is always recommended due to the high risk of a child’s intestines getting caught in the hernia opening, which can strangulate the hernia and decrease blood supply to the intestines,” Jarboe says.

Two common methods of repair include:

An open hernia repair involves a one to two-inch incision being made over the site and the hernia is then repaired by suturing the open inguinal canal closed. For a laparoscopic repair, two small ports are placed through punctures or small, half-inch incisions in the abdomen. For children, this is often done through the bellybutton and two additional sites on the abdomen.

Surgical tools and a light are placed into the ports to suture the muscle at the hernia site. Carbon dioxide gas is used to inflate the abdomen to make the internal organs and other important vessels easier to see, which may cause less trauma and lead to a quicker recovery time.

Epigastric hernias, similar to inguinal hernias, are typically much smaller and occur in the middle of the abdomen and bellow the breastbone.

To date, Jarboe has used his incision-less surgery to correct hernia defects in approximately 50 patients.

During an inguinal hernia repair under Jarboe’s method, the patient is placed under sedation and Jarboe delivers a suture using ultrasound guidance and two needle pokes as points of entry to create a closed sac around the hernia. He then may use a scope to assure the sac is completely closed, after pulling the needle back out through the same hole in the skin.

“Hernias are often difficult to precisely define with ultrasound.  Collaborating with other surgeons and a radiologist we thought about how to overcome this obstacle,” Jarboe says. “Injecting saline fluid into the abdomen makes the hernia sac light up beautifully on ultrasound and makes its borders easily definable.”

Although Jarboe’s epigastric hernia repair technique is similar to inguinal, saline fluid is not needed to see an epigastric hernia clearly on an ultrasound. Jarboe says this is because of the clearer defects in the fascia, the connective tissue in the body that helps support and protect muscle groups and organs.

So far all of the procedures have been performed on female patients. According to Jarboe, in males, the testicular vessels and spermatic cord are intimately associated with the hernia sac and are very small, making them difficult to see. Injury to these vessels carry a great risk of testicular damage. However, Jarboe is hopeful of a future in which males can get this procedure as well.

For those that opt for Jarboe’s method, there are a myriad of benefits to the patient. Most notably:  minimal scarring, which is important for growing children since incisions stretch over time.

“The field of surgery is not static. Incisions will not be getting bigger in the future; they’ll be getting smaller,” says Jarboe. “Our team is making those steps and pushing those limits.”