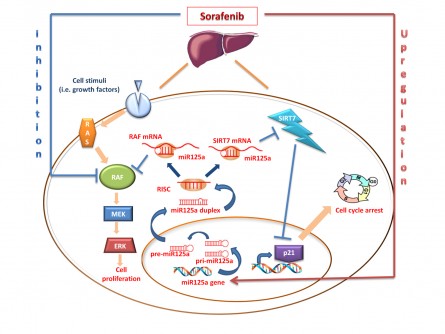 MicroRNA-125a-5p is a downstream effector of sorafenib in its antiproliferative activity toward human hepatocellular carcinoma cells.

Sorafenib is a multikinase inhibitor with specific activity against Raf kinase and several receptor tyrosine kinases. The addition of sorafenib to hepatocellular carcinoma cells increased cellular expression of miR-125a. Upregulation of this miRNA inhibited cell proliferation and induced cell cycle arrest by targeting c-Raf, part of the ERK pathway that is involved in cell proliferation and sirtuin-7, (SIRT-7) a NAD(+)-dependent deacetylase that inhibits transcriptional activation of the cell cycle inhibitor p21. Therefore, sorafenib inhibits Raf activity and upregulates miR125 that, in turn, targets c-Raf and SIRT7; this dual inhibition of Raf activity and expression together with p21-dependent cycle arrest coherently combine to explain the antiproliferative activity of the drug.

Newswise — Treatment options for liver cancer are often limited and almost exclusively involve transplantation if possible, or local chemoembolization and radiofrequency ablation. Medical treatments for more advanced stages have been explored during recent decades, but only the drug sorafenib, a small molecule multi-kinase inhibitor, has shown promising results and been approved for use by international medical agencies. Unfortunately, only 25% of patients respond to sorafenib treatment, so researchers have endeavored to understand its mechanism of action and discover a way to boost its effectiveness.

A recent study, published in the journal Journal of Cellular Physiology, describes further scientific insight into the involvement of a small non coding RNA, miR-125a, in the anti-cancer effects of sorafenib in the treatment of liver cancer, or hepatocellular carcinoma. These results are interesting as miRNAs have multiple available intracellular targets and could contribute to the amplification of the effects of sorafenib.

The link between small kinase inhibitors such as sorafenib, and the existing molecular pathways that govern cell proliferation such as miR-125a, may be useful to potentiate the anticancer activity of sorafenib. Clinical applications of this knowledge might seek to identify and increase the number of liver cancer patients that respond positively to the drug.

The study includes work done by Prof. Michele Caraglia and Aniello Russo, of the University of Campania “L. Vanvitelli” in Naples, and Caserta, Italy, in collaboration with Prof. Antonio Giordano, Director of the Sbarro Institute for Cancer Research and Molecular Medicine at Temple University in Philadelphia.

“Sorafenib is still the only drug indicated in the treatment of hepatocellular carcinoma, which highlights the difficulty in the medical treatment of liver cancer,” says Prof. Antonio Giordano. “Sorafenib is effective because it acts upon multiple intracellular targets and interferes with both cancer proliferation and tumor blood supply. However, its activity is limited to only 25% of patients that are sensitive to its effects. This strongly pushes the researchers to define the mechanism of action of the drug,” Giordano concludes.

“MicroRNAs can act as either cancer-fighting tumor suppressors, or as cancer-causing oncogenes,” says Professor Michele Caraglia. "We have found that the expression of miR-125a is strongly involved in the mechanism of action of sorafenib and its ability to regulate cancer cell proliferation. These findings suggest the possible use in the future of miR125a in combination with sorafenib in order to potentiate the anti-cancer activity of the drug,” Caraglia concludes.

The study results open a new scenario of intervention in the treatment of hepatocellular carcinoma in which small molecules such as sorafenib can be used in association to nucleic acids such as miR-125a. The latter could be administered to patients systemically encapsulated in novel drug delivery options such as nanocarriers. Researchers plan to further study the in vivo efficacy of these strategies to increase treatment options for this difficult form of cancer.