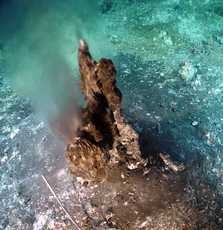 An approximately 2-foot-tall chimney on Axial Volcano vents hot hydrothermal fluids like the ones collected by University of Washington researchers in the search of archaea capable of fixing nitrogen at high temperatures.

Newswise — A heat-loving archaeon capable of fixing nitrogen at a surprisingly hot 92 degrees Celsius, or 198 Fahrenheit, may represent Earth's earliest lineages of organisms capable of nitrogen fixation, perhaps even preceding the kinds of bacteria today's plants and animals rely on to fix nitrogen.

The genetic analysis reported in the Dec. 15 issue of Science supports the notion that the gene needed to produce nitrogenase " an enzyme capable of converting nitrogen gas, that's unusable by life, to a form like ammonia that is useable " arose before the three main branches of life " bacteria, archaea and eukaryotes " diverged some 3.5 billion years ago, according to oceanographer Mausmi Mehta, who recently received her doctorate from the UW, and John Baross, UW professor of oceanography. This is opposed to the theory that the nitrogenase system arose within archaea and was later transferred laterally to bacteria.

"There's been lots of evidence that point to high-temperature archaea as the first life on Earth but the question has been, 'So why can't we find archaea that fix nitrogen at high temperatures?'" says Baross, who's been on a 20-year quest to find just such a microbe. Archaea are single-celled organisms that live under extreme environmental conditions, such as the high temperatures and crushing pressures below the seafloor. If heat-loving archaea were the first life on the planet, they would have needed a usable source of nitrogen, Baross says.

Known as FS406-22 because of the fluid and culture samples it came from, the archaeon discovered by the UW researchers is the first from a deep-sea hydrothermal vent that can fix nitrogen, says Mehta, first author on the Science paper.

It was collected at Axial Volcano on the Juan de Fuca Ridge off the coast of Washington and Oregon. Fixing nitrogen at 92 C smashes the previous record by 28 C, a record held by Methanothermococcus thermolithotrophicus, an archaeon that was isolated from geothermally heated sand near an Italian beach and fixes nitrogen at temperatures up to 64 C.

Nitrogen is necessary for all life because it is an essential part of amino acids and proteins. To be used by organisms, gaseous nitrogen must be converted to other compounds, or "fixed," which can only be done by certain bacteria and specific archaea. Nitrogen can be fixed into ammonia, nitrate and other products that can be used by land and sea plants, which in turn are eaten by higher animals.

Today's oceans contain nitrogen both as a dissolved gas and as nitrate. Ocean water that percolates down into the seafloor can pick up enough heat from volcanism deep in the earth to cause the fixed nitrogen to revert to its gaseous form. Venting water hotter than 30 C contains very little nitrate so organisms in areas where the subseafloor temperatures are higher would lack nitrogen in a form they can use.

The discovery of FS406-22's nitrogen fixing capabilities at 92 C, therefore, widens the realm of where life can grow in the subseafloor biosphere and other nitrogen-limited ecosystems, perhaps even on other planets, Mehta says.

Scientists have speculated since 1981 that nitrogen fixation was occurring at hydrothermal vents because vent animals had completely different nitrogen isotope ratios than non-vent deep sea animals.

The work that led to FS406-22 was supported by Washington Sea Grant, based at the UW, and the NASA Astrobiology Institute. Mehta worked five years doing some 600 enrichments, with FS406-22 being the only one she was could wean off fixed nitrogen completely. An unimpressive looking sphere of a microbe, FS406-22 is able to grow with gaseous nitrogen as its sole source of nitrogen at temperatures ranging from 58 to 92 C, with the fastest growth at 90 C.

The genetic analysis shows FS406-22 as having one of the deepest-rooted genes and the most primordial characteristics in terms of gene sequence, Baross says. "We propose that among diazotrophic archaea, the nitrogenase from FS406-22 might have retained the most ancient characteristics, possibly derived from a nitrogenase present in the last common ancestor of modern life," the co-authors conclude in their report.