Microbes set up their own markets, comparing bids for commodities, hoarding to obtain a better price, and generally behaving in ways more commonly associated with Wall Street than the microscopic world. 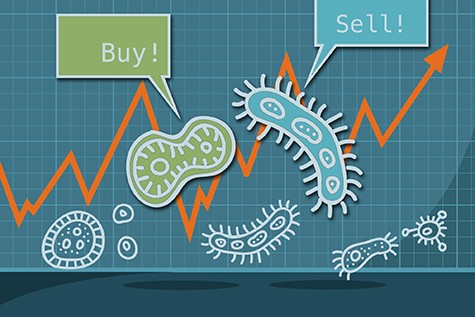 Newswise — The idea that people make calculated decisions that allow them to obtain the most goods with the smallest amount of effort — a complex hypothesis called ‘economic man’ for short — often has been challenged. People sometimes make irrational decisions, they rarely possess sufficient information to make the best decision, and they sometimes act against their own economic self-interest, critics say.

But none of these critiques is as radical as the one advanced in the Jan. 13 online issue of Proceedings of the National Academy of Sciences (PNAS). Written by an international team of researchers, it was inspired by a workshop on biological markets (transactions in which partners, typically animals, exchange commodities for their mutual benefit) held at the Lorentz Center of the University of Leiden in The Netherlands in January. (Click here for agenda.)

The scientists asked themselves how far biological market theory, which has been used successfully to explain cooperative behavior in many species, could be extended. Could it be used to describe, for example, the exchange of commodities between organisms without any cognitive ability, such as microbes.

They could think of instances where single-celled organisms had been shown to avoid bad trading partners, build local business ties, diversify or specialize in a particular commodity, save for a rainy day, eliminate the competition and otherwise behave in ways that seem to follow market-based principles.

They concluded not only that microbes are economic actors, but also that microbial markets can be useful systems for testing questions about biological markets in general, such as the evolution of partner choice, responses to price fluctuations and the identification of market conditions that drive diversification or specialization.

They even foresee practical applications of the work. It might be possible, for example, to manipulate ‘market conditions’ in crop fields to drive nitrogen-fixing bacteria to trade more their commodity (a biologically available form of nitrogen) with crop plants.

“Creative insights are often easier when theories from one field are explored in a different system as we do here, applying economic concepts to microbial interactions,” said Joan Strassmann, PhD, the Charles Rebstock Professor of Biology in Arts & Sciences at Washington University in St. Louis, who participated in the workshop and helped write the PNAS paper.

“The microscopic nature of microbial systems means it is easy to misunderstand their interactions; an economic framework helps us focus on what is important,” said David Queller, PhD, the Spencer T. Olin Professor of Biology, another of the brainstorming scientists.

Microbial business practicesThe idea of biological markets is not new. Biological market theory was first formulated in 1994, by two of the workshop participants, Ronald Noë, PhD, of Université de Strasbourg in France and Peter Hammerstein, PhD, of Institute for Theoretical Biology, Humboldt-Universität zu Berlin, in Germany

Scientists have long been aware that trades among a wide range of organisms are not blind exchanges but instead ones shaped by ‘market conditions’ such as price, quality and competition.

For example, cleaner fish, small fish that pick dead cells and mucus off of larger fish, provide a higher-quality cleaning service when competing cleaner fish are around.

What is new is the suggestion that single-celled organisms might participate in markets as well. Gijsbert Werner, a doctoral candidate at Vrije Universiteit in Amsterdam, The Netherlands, and the first author of the PNAS paper, said that the requirements for the emergence of market behavior are fairly minimal.

“For biological markets to evolve, you actually only need that individuals can detect co-operators and respond by rewarding them with more resources,” Werner said. “This can work through automatic responses. Organisms without cognition, like microbes, are also capable of automatic economic responses.”

Impressively complex behavior can emerge from those automatic responses. Toby Kiers, PhD, professor of evolutionary interactions at Vrije Universieit and the senior author on the paper, studies complex underground networks between plant roots and fungi associated with those roots, called mycorrhizal fungi. The plants supply the fungi with sugar in exchange for mineral nutrients such as phosphorus.

Kiers and her colleagues found that the fungi compare the resources on offer by different plants, and adjust their resource allocations accordingly.

Some fungi even hoard resources until they get a better deal. “We now see that such ‘playing of the market’ happens in microbes. Microbial traders can be ruthless, even using chemicals to actively elbow competitors out of the marketplace,” Kiers said.

The scientists expect that studying microbial exchange systems as miniature markets will give them insight into the many collaborative behaviors of microbes, helping to generate new hypotheses and approaches in the field of social microbiology.

And by comparing microbial markets and animal markets they will then be able to determine “which, if any, market features are specific to cognitive agents,” the scientists write.

So much for the egos of Wall Street traders.