Microbes far beneath the seafloor rely on recycling to survive 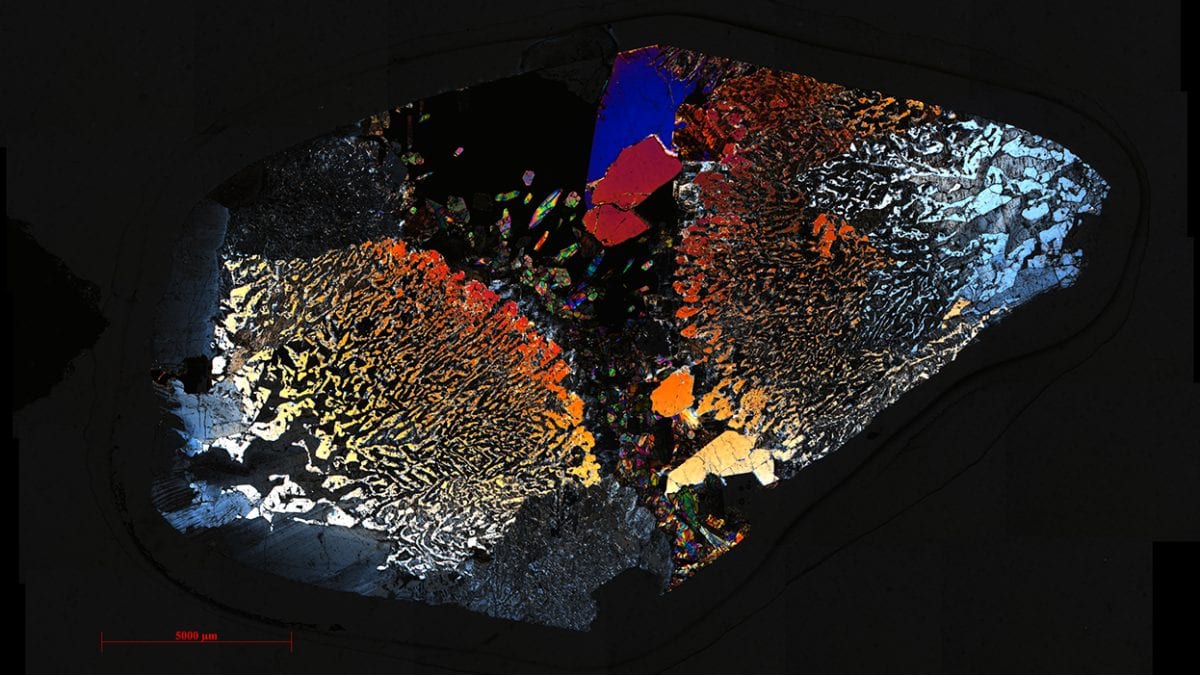 Detailed examination of rocks nestled thousands of feet beneath the ocean floor revealed life in plutonic rocks of the lower oceanic crust. Shown here is a thin section photomicrograph mosaic of one of the samples. 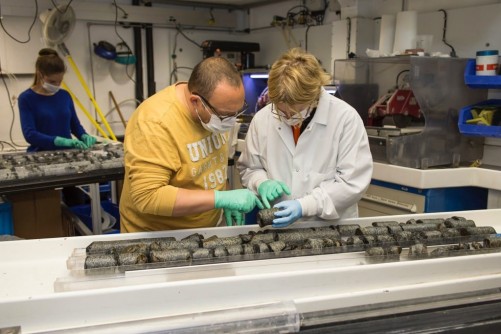 Researchers Benoit Ildefonse (left) of University of Montpellier and Virginia Edgcomb of WHOI select a sample for microbiology during the expedition at Atlantis Bank, Indian Ocean.

Newswise — Scientists from Woods Hole Oceanographic Institution reveal how microorganisms could survive in rocks nestled thousands of feet beneath the ocean floor in the lower oceanic crust, in a study published on March 11 in Nature. The first analysis of messenger RNA — genetic material containing instructions for making different proteins — from this remote region of Earth, coupled with measurements of enzyme activities, microscopy, cultures, and biomarker analyses provides evidence of a low biomass, but diverse community of microbes that includes heterotrophs that obtain their carbon from other living (or dead) organisms.

“Organisms eking out an existence far beneath the seafloor live in a hostile environment,” says Dr. Paraskevi (Vivian) Mara, a WHOI biochemist and one of the lead authors of the paper. Scarce resources find their way into the seabed through seawater and subsurface fluids that circulate through fractures in the rock and carry inorganic and organic compounds.

To see what kinds of microbes live at these extremes and what they do to survive, researchers collected rock samples from the lower oceanic crust over three months aboard the International Ocean Discovery Program Expedition 360. The research vessel traveled to an underwater ridge called Atlantis Bank that cuts across the Southern Indian Ocean. There, tectonic activity exposes the lower oceanic crust at the seafloor, “providing convenient access to an otherwise largely inaccessible realm,” write the authors.

Researchers combed the rocks for genetic material and other organic molecules, performed cell counts, and cultured samples in the lab to aid in their search for life. “We applied a completely new cocktail of methods to really try to explore these precious samples as intensively as we could,” says Dr. Virginia Edgcomb, a microbiologist at WHOI, the lead PI of the project, and a co-author of the paper. “All together, the data start to paint a story.”

By isolating messenger RNA and analyzing the expression of genes — the instructions for different metabolic processes — researchers showed evidence that microorganisms far beneath the ocean express genes  for a diverse array. Some microbes appeared to have the ability to store carbon in their cells, so they could stockpile for times of shortage. Others had indications they could process nitrogen and sulfur to generate energy, produce Vitamin E and B12, recycle amino acids, and pluck out carbon from hard-to-breakdown compounds called polyaromatic hydrocarbons. “They seem very frugal,” says Edgcomb.

This rare view of life in the far reaches of the earth extends our view of carbon cycling beneath the seafloor, Edgcomb says. “If you look at the volume of the deep biosphere, including the lower oceanic crust, even at a very slow metabolic rate, it could equate to significant amounts of carbon.”

This work was supported by the National Science Foundation.

Caption: Detailed examination of rocks nestled thousands of feet beneath the ocean floor revealed life in plutonic rocks of the lower oceanic crust. Shown here is a thin section photomicrograph mosaic of one of the samples.