Microplastics from ocean fishing can ‘hide’ in deep sediments 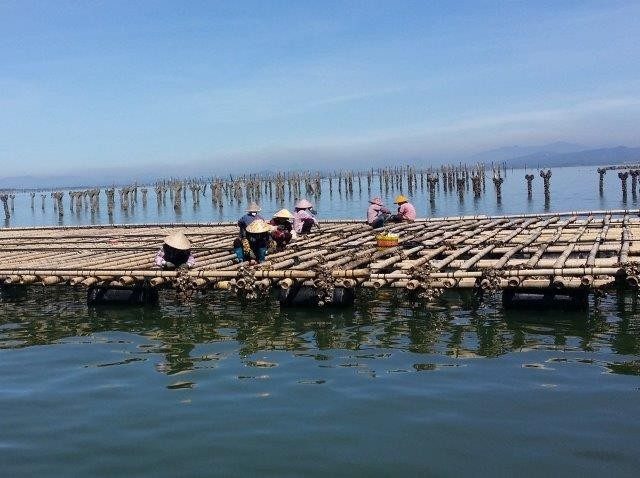 Fishing activities, such as raft cultures for oysters (seen here), could have deposited microplastics deep in sediments of China’s Beibu Gulf, researchers find.

Newswise — Microplastic pollution in the world’s oceans is a growing problem, and most studies of the issue have focused on land-based sources, such as discarded plastic bags or water bottles. Now, researchers reporting in ACS’ Environmental Science & Technology have linked microplastics in China’s Beibu Gulf with heavy fishing activities. Surprisingly, many of the particles were hidden in deep sediments on the ocean floor, which could have led scientists to underestimate the extent of the contamination.

Fishing gear, such as nets, ropes and pots, is a potential sea-based source of microplastics. The tiny particles could be worn away from fishing gear during use, or they might arise when the gear is lost or discarded in the ocean. Yinghui Wang and colleagues wanted to measure microplastics in surface sediment samples from different sites in Beibu Gulf, a traditional fishing ground of China and the China-Indo peninsula that lacks substantial industrialization and urbanization. They also wanted to look for this type of contamination in deep sediments, up to 2 feet below the surface, which have not been well studied with respect to microplastic pollution.

The researchers collected 52 sediment samples from Beibu Gulf and adjacent rivers in July 2017. Microplastics were separated from sediment samples and counted under a microscope. Most of the particles were made of polypropylene (PP) or polyethylene (PE), which are materials widely used in fishing nets and rope. The team found a strong correlation between the intensity of fishing activities, such as capture fishing or mariculture, and the abundance of PP and PE fibers. Unexpectedly, microplastics were detected even one foot below the surface, which corresponds to about the year 1913 (before the observed plastics were invented). The particles could have been transported to deep sediment layers by marine worms. Because most previous studies have considered only microplastics in surface sediment, this type of pollution in ocean sediments worldwide could be greatly underestimated, the researchers say.

The authors acknowledge funding from the National Natural Science Foundation of China and the Science and Technology Major Project of Guangxi.

For more research news, journalists and public information officers are encouraged to apply for complimentary press registration for the ACS Spring 2020 National Meeting & Exposition in Philadelphia.

Note: ACS does not conduct research, but publishes and publicizes peer-reviewed scientific studies.