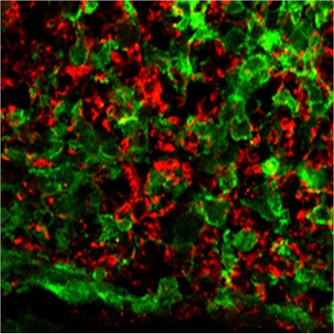 This image shows restored presence of proteins indicating myelin reformation (shown in red) in the lumbar spinal cord of a mouse treated with miR-219 mimic after injury to its central nervous system. Researchers report March 27 in Developmental Cell treatment with the micro-RNA partially repaired damaged nerves and restored limb function in mice.

In a study published online March 27 in Developmental Cell, researchers at Cincinnati Children’s Hospital Medical Center report that treatment with a microRNA called miR-219 restarted production of a substance called myelin in nerves of the central nervous system. Myelin forms a protective sheath around nerves, allowing them to efficiently transmit electrical impulses that stimulate movement.

Study authors administered miR-219 into the spinal columns and cerebrospinal fluid of mice with nerve coatings damaged by a chemical called lysolecithin or by autoimmune encephalomyelitis induced in the animals, which is used to model MS. Treatment with miR-219 reinvigorated the function of damaged cells called oligodendrocytes that produce myelin, which allowed the substance to reform and reinsulate nerves.

“We show that miR-219 targets multiple processes that inhibit myelin formation after nerve injury by the disease process, and that treatment with this microRNA partially restores myelination and limb function,” said Q. Richard Lu, PhD, lead investigator and scientific director of the Brain Tumor Center at Cincinnati Children’s. “It is conceivable that augmenting miR-219 treatment with other blockers of myelin regrowth may provide a multipoint treatment strategy for people with demyelinating diseases like MS.”

The authors stress that because their study was conducted in laboratory mouse models of disease, their data cannot at this stage be applied to clinical treatment in humans.

Lu’s laboratory studies how certain glial cell subtypes of the central and peripheral nervous system form, participate in regeneration and how they can transform into cancerous cells.

A number of earlier research papers have pointed to the absence of miR-219 in the damaged nerves and tissues with certain neurodegenerative diseases like multiple sclerosis.

Lu and his colleagues tested the presence and effects of miR-219 in genetically-engineered mouse models of MS with chemically induced nerve coating damage by lysolecithin and autoimmune encephalomyelitis. They also deleted miR-219 in mice to test the impact this had on myelin-forming oligodendrocyte cells.

The absence of miR-219 allowed a surge of activity by several inhibitors of nerve re-myelination – including a protein called Lingo1. Further testing revealed that miR-219 is an essential part of a network that targets and blocks molecules that inhibit the ability of oligodendrocytes to form myelin.

This prompted the researchers to test treatment with miR-219 in their animal models. For this they used a miR-219 mimic – essentially a synthesized version of the microRNA. After administering the mimic to their mouse models, the researchers noted improved limb function and regeneration of the myelin coating on nerves.

Lu and his colleagues are now trying to develop additional mimics of miR-219 and therapeutically effective formulations of the microRNA to ease its delivery – particularly into brain tissue. The researchers also continue to test the potential effectiveness of miR-219 treatment in different models of neurodegenerative disease.