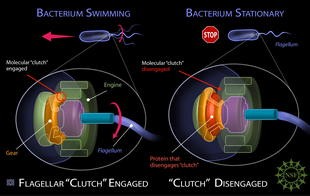 Scientists have learned a tiny molecular clutch disengages the flagellum's tail from the engine that powers its rotation. To see the full image, click the link below. (Illustration courtesy of the National Science Foundation)

Newswise — A tiny but powerful engine that propels the bacterium Bacillus subtilis through liquids is disengaged from the corkscrew-like flagellum by a protein clutch, Indiana University Bloomington and Harvard University scientists have learned. Their report appears in this week's Science.

"We think it's pretty cool that evolving bacteria and human engineers arrived at a similar solution to the same problem," said IU Bloomington biologist Daniel Kearns, who led the project. "How do you temporarily stop a motor once it gets going?"

The action of the protein they discovered, EpsE, is very similar to that of a car clutch. In cars, the clutch controls whether a car's engine is connected to the parts that spin its wheels. With the engine and gears disengaged from each other, the car may continue to move, but only because of its prior momentum; the wheels are no longer powered.

EpsE is thought to "sit down," as Kearns describes it, on the flagellum's rotor, a donut-shaped structure at the base of the flagellum. EpsE's interaction with a rotor protein called FliG causes a shape change in the rotor that disengages it from the flagellum's proton-powered engine.

The discovery of EpsE and its function was accidental. Kearns and colleagues were actually interested in learning more about the genes that cause individual cells of B. subtilis to cease wandering in solitude and take up residence in a massively communal, stationary assemblage called a biofilm. The stability of biofilms can be jeopardized by hyperactive bacterial cells whose flagella continue to spin.

"We were trying to get at how the bacterium's ability to move and biofilm formation are balanced," Kearns said. "We were looking for the genes that affected whether the cells are mobile or stationary. Although B. subtilis is harmless, biofilms are often associated with infections by pathogenic bacteria. Understanding biofilm formation may eventually prove useful in combating bacterial infections."

Once the scientists learned EpsE was involved in repressing flagellar motion, they devised two possible explanations for how EpsE acts. The first was that EpsE acts like a brake by pushing a non-moving part against a moving part and locking up the works. The other possibility, they imagined, was that EpsE acts like a clutch, disengaging one moving part from another. In this latter scenario, the engine can no longer drive flagellar spinning because key moving parts are no longer in contact. In this case, the flagellum would still have freedom of motion, listless as it might be.

To determine which hypothesis was correct, the scientists decided it best to let the tail wag the dog. They attached the tail end of the flagellum to a glass slide and examined the movement of the entire cell in the presence and absence of EpsE. In the absence of EpsE, the entire cell rotated once every five seconds. In the presence of EpsE, the cells stopped but could rotate passively, pushed by disturbances in the environment (Brownian motion). If EpsE acted like a brake, the cells would not have rotated at all.

The researchers also learned that when the cell begins producing EpsE, it takes about 15 minutes before the flagellar machinery is disabled.

"This makes a lot of sense as far as the cell is concerned," Kearns said. "The flagellum is a giant, very expensive structure. Often when a cell no longer needs something, it might destroy it and recycle the parts. But here, because the flagellum is so big and complex, doing that is not very cost effective. We think the clutch prevents the flagellum from rotating when constrained by the sticky matrix of the biofilm."

The discovery may give nanotechnologists ideas about how to regulate tiny engines of their own creation. The flagellum is one of nature's smallest and most powerful motors -- ones like those produced by B. subtilis can rotate more than 200 times per second, driven by 1,400 piconewton-nanometers of torque. That's quite a bit of (miniature) horsepower for a machine whose width stretches only a few dozen nanometers.

IU Bloomington Biology Research Associate Kris Blair is the paper's lead author. IUB undergraduate student Jared Winkelman and Harvard University microbiologists Linda Turner and Howard Berg also contributed to the report. It was funded with a grant from the National Science Foundation (Kearns) and the National Institutes of Health (Berg).