Microscopic Indigestion Caught in the Act

Newswise — Photosynthesis is a key process to life on earth that only plants, algae and some bacteria are capable of doing. Microbial evolutionary theory suggests that about a billion years ago, microbes ingested other organisms with photosynthetic properties and used those 'captives' as solar powered food factories to supply themselves with nutrition.

This ingestion would eventually result in the original microbe becoming capable of photosynthesis, and the remnants of the 'captive' organism would disappear. The process is said to have produced the biodiversity in our oceans that underpins ocean food webs and contributes to atmospheric balance.

However, there hasn't been much evidence to support that this microscopic ingestion was what ultimately produced the sort of organisms that rely on photosynthesis today.

The study of two enigmatic and complex groups of algae has uncovered this process in action. Now scientists are able to see an organism operating photosynthetically, while still being able to detect two very distinct genetic blueprints, revealing how two very different organisms once merged at the genetic level.

This discovery adds further evidence to support the theory that much of the photosynthetic life on earth and the resulting biodiversity began because of two organisms merging, via ingestion of one by another.

“The reason why these two genomes are of significance and importance to the scientific world is that they give us more insight into how that process happened. Because normally, the captured cell, most of it disappears, and only the important parts—being the photosynthetic apparatus—remains," says Dr. Bruce Curtis, first author of the study. "But in the case of these two organisms, they didn’t go to completion. So we see the process in action, so to speak.”

The study (published in Nature, November 28): Algal genomes reveal evolutionary mosaicism and the fate of nucleomorphs. 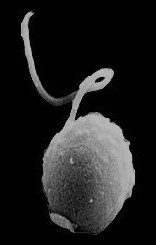 Caption: Bigelowiella natans, a type of algae decoded in the study. 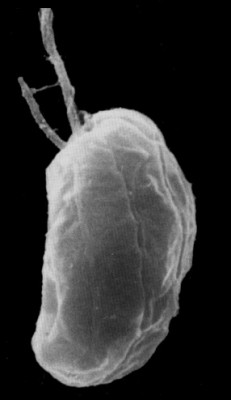 Caption: Guillardia theta, a type of algae decoded in the study.