6-Oct-2008 8:00 AM EDT, by University of Alabama Huntsville more news from this source 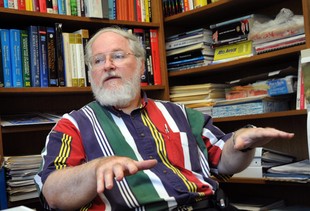 Newswise — When astronauts land on the Moon in the not too distant future, it's possible they will be visiting an outpost where they can pick up some fuel and a refreshing container of liquid.

That outpost won't be offering the 64-ounce Big Gulp soft drinks that you find at many of the convenience stores across the country, but it will be offering a critical commodity " water.

Research conducted by material scientists may lead to the ability to extract water from the Moon and possibly Mars by shooting microwave beams into their surface, according to Bill Kaukler, an Associate Research Professor in the Center for Materials Research at The University of Alabama in Huntsville.

"A lot of people think that water doesn't exist on the Moon," said Kaukler. "It's true that not all parts of the Moon have water. Where the Apollo missions landed, there isn't much water because it is exposed to the sun half of the time. However, in the polar regions, exploratory satellites have found huge amounts of hydrogen, which is evidence that water exists."

Kaukler has performed research with NASA for more than 25 years and for the past three years has been investigating the use of microwaves to replenish water on space missions or as a rocket fuel supply.

The Moon's surface is covered with over two meters deep of regolith (like soil), a layer of loose, powdery, heterogeneous material created by hundreds of millions of years of meteorite and comet bombardment. Below that covering lies bedrock. "Ice is just inches below the surface of the moon in craters at the poles (where solar heating doesn't occur)," he said.

Kaukler and Marshall Space Flight Center scientist Edwin Ethridge have been conducting research on the use of microwaves to warm the lunar regolith to draw the water up to the surface.

"Using microwaves to heat the soil offers several advantages," Kaukler said. "Microwaves are not strongly absorbed by the regolith (soil) so it can penetrate several feet into the soil and heat it." Heating is possible because the Moon's soil has about 5 percent iron, similar to volcanic rock on Earth, according to Kaukler. Microwave absorption is the most efficient method to heat large volumes of regolith or rock.

He said research shows that if the regolith can be warmed from a minus 150 degrees Celsius to minus 50 degrees, the vapor pressure of the water mixed in with the regolith particles is much higher than the Moon's atmospheric pressure. Kaukler said the moon's vacuum environment literally percolates the water vapor to the surface through the regolith particles. The water vapor collects on a cold (below minus 50 C) plate where it forms as ice and is scraped off for human consumption or where it can be converted by electrolysis to hydrogen and oxygen to be used as a fuel and oxidizer that can be used in space travel, like going to Mars.

The scientists have been confident of their research, but were encouraged by findings this summer when the Phoenix Mars lander confirmed the presence of water ice on the Martian surface. The lander scratched just two inches below the surface of Mars to expose the ice.

Kaukler, Ethridge and other materials scientists have developed a prototype and have used simulated lunar regolith to test their ideas. Their prototype has the power of one kilowatt, about the same as a typical home microwave oven.

What their experiments show is that they are able to remove 99 percent of water-ice through sublimation, or converting the frozen water directly into a gas, and could capture 95 percent of the liberated water.

While the one-kilowatt device may prove the concept, Kaukler said a 10-kilowatt unit would speed up the process of collecting water and make it more effective on the Moon's surface. He envisions a robotic, roving device powered by a nuclear generator to roam the Moon's surface in search of water sources.

Kaukler believes the concept of shooting microwave beams into the surface of the Moon or Mars to extract water offers several distinct advantages: not having to dig the regolith and put it into a furnace is a big advantage since heavy equipment won't be needed; leaving the Moon essentially undisturbed is important; not worrying about the underlying geology is practical since hidden or buried rocks (that have no water) could damage digging equipment.

Perhaps the most important factor of this project is not carrying water on a journey, thus saving space and weight on long-distance trips. "This is the essence of the concept of In Situ Resource Utilization or ISRU, " Kaukler said. "The philosophy is to use what is on the Moon (or Mars) to make habitats without having to bring the material from Earth."

Another crucial factor is safety. The microwave process penetrates into the surface at least two meters deep, thus eliminating the need to dig into the surface to get to the ice, according to the scientists. Kaukler said the idea of kicking up dust by digging on the Moon poses a problem for equipment and astronauts if the abrasive dust finds its way into the wrong places, as it did for the Apollo astronauts.

Research continues, according to Kaukler. More investigation is necessary to learn about the electromagnetic properties of regolith in the various microwave frequencies. Altering those frequencies could allow the device to penetrate deeper into the surface if necessary to reach additional water.

Kaukler and Ethridge are also exploring the use of microwaves for melting or sintering the regolith to make structures on the Moon.

An important concept they developed was the use of microwave melting of the regolith surface to make a dust-free crust. Such surfaces have uses as a landing pad (no dust kicked around the landing site by rockets), working surfaces to stabilize equipment and floors or roadways for astronauts to live and travel on. Conventional bricks, blocks or walls can also be prepared this way without bringing adhesives or special cements to Moon.