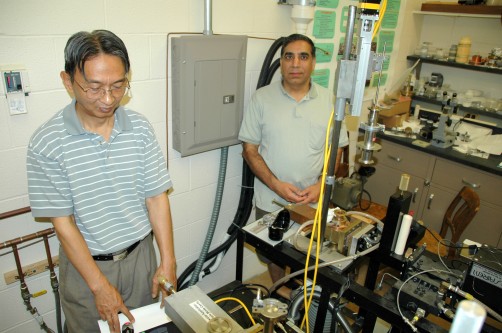 Jiping Cheng and Dinesh Agrawal in the microwave lab.

Newswise — With the support of a Phase II grant from the Bill and Melinda Gates Foundation, Penn State materials scientists and medical researchers are working to develop a process to destroy malaria parasites in the blood using low-power microwaves. Dinesh Agrawal, professor of materials, and Jiping Cheng, senior research associate in the Penn State Materials Research Institute, are working with Penn State College of Medicine researchers and researchers at INDICASAT-AIP, Panama, and at Clarkson University, N.Y., to test the microwave treatment in vitro and in mice models.

Malaria continues to kill nearly a million people worldwide each year, the large majority of them children under five. Recent reports from Cambodia suggest that currently effective antimalarial drugs are beginning to lose their effectiveness as the most virulent malaria strain develops resistance. The Gates Foundation funds efforts to eradicate the disease through traditional methods, such as providing mosquito netting and insecticides, and through innovative ideas, such as those being tried out at Penn State through a Gates Foundation Grand Challenges Explorations grant.

“The first phase successfully demonstrated that the way microwaves heat the malaria parasite causes it to die without harming normal blood cells,” says Agrawal, who is director of the Microwave Processing and Engineering Center and an authority on microwave engineering. “Microwave interactions are unique. The parasite has extra iron ( Fe3+) that enhances the microwave energy absorption by the parasite. As a result, it is postulated that the parasite gets heated preferentially and is killed without affecting the normal blood cells.”

The team, which is led by associate professor Jose A. Stoute in the Penn State College of Medicine, applied for the Gates funding two years ago and received second phase funding of up to $1 million in July 2011. The first phase tested the microwave process in a laboratory culture. The second phase will use a larger system and test the process in mouse models. If those tests are successful, Agrawal says, the next step will be to design and build a system to treat human beings. Part of that work will be done at Penn State and part at Clarkson University. “That could be revolutionary,” Agrawal says. “A human size device might look like the scanners at the airport.”

The Grand Challenges Explorations is an initiative of the Bill and Melinda Gates Foundation that allows for research that is typically too bold to attract funding from other sources. Other researchers involved in the grant include Dr. Carmenza Spadafora from the Instituto de Investigaciones Científicas y Servicios de Alta Tecnología in the Republic of Panama and Prof. William Jemison and Dr. Christopher Nadovich from the College of Engineering at Clarkson University.

The Materials Research Institute coordinates Penn State’s interdisciplinary materials-related research activities, encompassing more than 200 faculty groups. Penn State’s signature scientific research building, the Millennium Science Complex, is scheduled to open in Fall 2011. Housing both the Materials Research Institute and the Huck Institutes for the Life Sciences, this building is designed to integrate the physical and life sciences and engineering. Learn more about materials research and the Millennium Science Complex at www.mri.psu.edu.