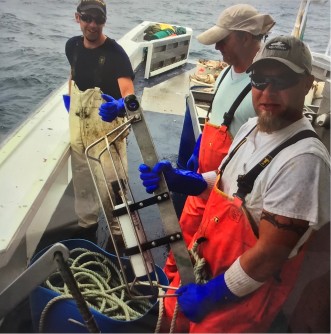 Newswise — Woods Hole, MA (July 6, 2022) – A new study led by Woods Hole Oceanographic Institution (WHOI) shows a significant increase in frequency of warm saltwater intrusions from the deep ocean to the continental shelf along the Middle Atlantic Bight, which extends from the Gulf of Maine to Cape Hatteras, North Carolina. Using data collected from NOAA’s National Marine Fisheries Service Ecosystem Monitoring program, as well as data collected from the fishing industry, the study’s results show that ocean exchange processes have greatly changed over the past 20 years in this region.

The study’s findings were described in a recent paper published in the Journal of Geophysical Research: Oceans.

“I think the reason the paper is so important is because it quantifies an ocean process changing, potentially as a direct result of ocean warming and more stratification,” said Glen Gawarkiewicz, WHOI senior scientist and paper corresponding author. “These findings could also have major shelf ecosystem implications. Given the increased frequency of mid-depth salty intrusions along the Mid-Atlantic Bight, it will be necessary to properly resolve this process in numerical simulations in order to account for salt budgets for the continental shelf and slope”

An intrusion occurs when warm, salty seawater moves toward the edge of the continental shelf, “intruding” on cold, fresh continental shelf water. What scientists like Gawarkiewicz are noticing in this study is that more intrusions are moving in at mid-depth, and reaching up to 60 miles on shore, carrying the warm offshore water large distances.

“Water in this region is becoming less like the Arctic and more like the tropical Atlantic,” Gawarkiewicz said.

Gawarkiewicz and his collaborators reviewed more than 20,000 profiles that were collected by research and fishing vessels over the last three decades. Despite the  profiles of salinity being scattered in space and time, the data showed evidence of numerous mid-depth salinity maximum intrusions, which greatly increased since 1998. A 2003 paper showed how the intrusions were occurring about 10 percent of the time, and this new study finds it occurs 18 percent of the time. The team is investigating a possible link to the annual rate of formation of warm core rings, which are eddies that form and break off from an ocean current, such as the Gulf Stream.

“There is more and more evidence that conditions are changing rapidly across the entire ecosystem, with offshore waters influencing the shelf more frequently and on very different timescales than we have seen in the past,” said Paula Fratanoni, Chief of the Oceans and Climate Branch at the Northeast Fisheries Science Center within the National Marine Fisheries Service, and paper co-author. “It’s imperative that we work to better understand these processes and any potential impacts they might have on critical shelf habitats.”

These findings are not only important for physical oceanography and climatology research, but for the commercial fishing industry as well.

“This is a tremendous opportunity for dialogue than with the fishing community, helping them recognize these mid depth intrusions once they log a profile. Then, they can use it to decide where to fish and focus the bulk of their work,” Gawarkiewicz said. “Future work is necessary to determine how the increasing frequencies of this important process may be affecting continental shelf heat and salt balances as well as broader impacts to the continental shelf ecosystem. This study is valuable in quantifying processes that may be hastening that ecosystem realignment, especially when addressing things like food insecurity.”

About the Woods Hole Oceanographic Institution