Might More Ravens –Aided by Humans – Mean “Nevermore” For Sage-Grouse? 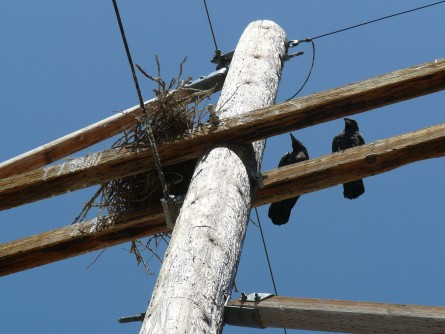 Ravens sit alongside their nest atop a transmission pole in southeastern Idaho. 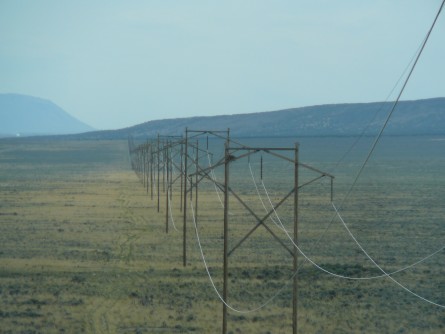 Newswise — BOZEMAN (January 7, 2014) – A new study by the Wildlife Conservation Society, Idaho State University and the U.S. Geological Survey suggests that habitat fragmentation and the addition of makeshift perches such as transmission polls in sagebrush ecosystems are creating preferred habitat for common ravens that threaten sensitive native bird species, including greater sage grouse.

The authors looked at 82 raven nests on the U.S. Department of Energy’s Idaho National Laboratory land in southeastern Idaho, a sagebrush steppe ecosystem where ravens increased in numbers eleven-fold between 1985 and 2009. The study area has been subject to various alterations such as the addition of transmission lines, roads, and other human construction.

Results showed that 58 percent of raven nests were located on transmission poles, 19 percent were in trees, and 14 percent were on other human-made towers. A 31 percent decrease in the likelihood of nesting by ravens was observed for every one kilometer increase in distance away from a transmission line when compared to unaltered areas.

The authors noted that the transmission poles are taller than any other object in the study area and that nesting in or near them may afford the raven myriad advantages including a wider range of vision, greater attack speed and easier take-off. Nesting on the poles may also gain them greater security from predators, range fires, and heat stress.

“By altering the landscape with roads, facility construction, billboards, and transmission lines, and in some cases providing sources of water and food, we are subsidizing ravens and providing them with the opportunities and advantages they need to excel in areas that they didn’t before,” said lead author Kristy Howe. “This is bad news for the animals in that ecosystem upon which ravens prey.”

Common raven populations have increased more than 300 percent over the last 40 years in the western United States. Along with the eggs and nestlings of greater sage grouse, ravens also prey on the federally endangered Desert Tortoise, the endangered San Clemente Loggerhead Shrike and the California Least Tern.

In addition to proximity to transmission lines, ravens in the study area selected nest sites that were in close proximity to edges formed between sagebrush and land cover types associated with direct human disturbance such as introduction of non-native species, or fire. The degree of this fragmentation averaged 2.4 times greater at nest locations in the study area than at random unaltered sites. The scientists believe that in contrast to continuous sagebrush stands, edges enable the ravens to more readily detect prey and depredate nests of other bird species.

The authors summarized that among all variables, the distance to transmission lines, distance to edge and amount of edge had the greatest relative importance to ravens in selecting nesting locations. However, the findings in the study indicated that ravens also preferred nesting areas with non-native vegetation and they avoided junipers more so than on random sites.

The results of these findings pointed to further increases in raven abundance in formerly natural sagebrush steppe following alterations made by people, specifically those associated with energy development and an expanding electric grid. The authors state, “Such an increase likely poses an increased threat to sagebrush steppe species subject to raven depredation, including sage-grouse for which eggs and young are consumed by ravens.”

WCS Northern Rockies Program Coordinator Jeff Burrell said, “Sagebrush steppe is one of the most important and most threatened habitats in the western U.S. Healthy sagebrush steppe provides crucial cover and food resources for a wealth of species including sage-grouse, pronghorn and mule deer. Poor livestock grazing management, invasive species such as cheatgrass, transmission lines, energy development and subdivisions are all contributing to the loss of this vital resource. This research provides essential information we need to reverse these trends.”

The authors believe their findings can be used by land managers to predict likely outcomes related to forthcoming disturbances occurring as a result of grid development, and that protecting unaltered landscapes from fragmentation by transmission lines, roads, crested wheatgrass plantings and the invasion of other non-native vegetation is integral to stemming range expansion by ravens.