6-Mar-2017 7:00 AM EST, by SUNY College of Environmental Science and Forestry
favorite_border 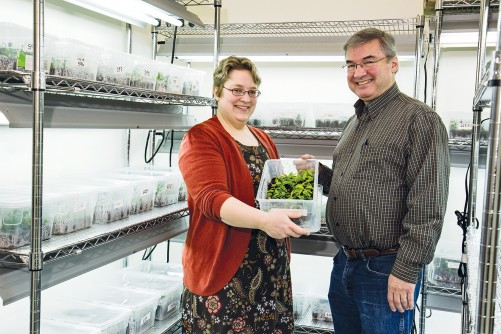 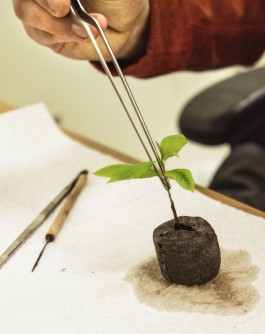 A plantlet is moved into a peat pellet for rooting. 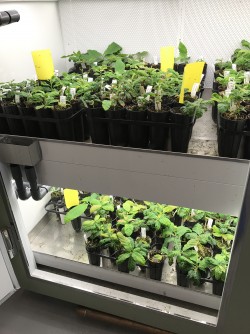 Newswise — Scores of tiny American chestnut seedlings that grow in a field in the upstate New York countryside could be the vanguard in the restoration of what was once the most dominant tree in the eastern forests.

The young trees carry one gene, added by scientists to the 38,000 genes that occur naturally in American chestnuts, that makes them capable of withstanding the invasive blight that wiped out billions of their ancestors a century ago.

Powell and his team are poised to seek regulatory approval from the federal government to distribute the trees publicly. That will involve review by the U.S. Environmental Protection Agency, the U.S. Department of Agriculture, and the Food and Drug Administration. Although regulatory approval has been sought, and obtained, for many agricultural crops, this is the first time such approval will be considered for a threatened plant that is intended to be reintroduced into its natural environment. Powell expects the process to take two to four years.

“We’re paving the way for all the other trees that are affected by invasive species: ash, elm, hemlock and walnut among them,” he said. “We are the first to ask for approval for a genetically engineered wild tree, the first to go through the regulatory process.”

Powell has worked on restoration of the iconic tree for more than 27 years. He and his research partner, Charles Maynard, discovered during years of painstaking tests that using biotechnology to add one gene derived from wheat makes the American chestnut blight resistant.

Restoring them to the eastern forests would have a significant positive ecological impact. “It would affect a lot of wildlife – from bees to bears,” Powell said. “Animals would feed on the nut mast and some aquatic insects actually prefer to feed on the leaves of American chestnut trees, rather than the oaks that have taken their place.”

One hundred transgenic trees have been planted in a two-acre “seed orchard” where they are monitored while they grow large enough to produce pollen. When that happens, the pollen will be used to fertilize the flowers from wild-type “mother trees” to help rescue the surviving genetic diversity. The offspring will produce nuts, half of which will inherit the blight-resistance gene.

Powell said that although crossing the resistant trees with wild-type trees will take longer to produce a quantity of blight-resistant nuts, the process will increase the genetic diversity and local adaptation of the new trees and make the species more vigorous in the years to come.

“We want to do everything we can to make it easier for them to survive,” Powell said. “That’s OK. We’re in this for the long haul. We don’t want a monoculture. This is not an agricultural crop – it’s a wild tree that needs our help.”

While the young trees grow, Powell and his team continue their research. They have developed a field test that indicates, within four hours, which nuts contain the blight resistance gene and which do not. They are collecting data about whether leaf litter from transgenic American chestnuts on the forest floor affects the germination rate of other tree species and whether leaf litter in streams had any adverse effect on aquatic insects. They are also studying whether the transgenic trees have any negative impact on the beneficial mycorrhizal fungi that typically colonize the root system of host plants.

“We’ve done enough research to know that the transgenic trees have no detrimental effects on leaf litter, insects or fungi,” Powell said. “But we’re doing further studies to build a body of knowledge that shows these trees will not harm the environment in any way.”

ESF is speeding up the production of transgenic trees at a recently launched Tissue Culture Production Lab at the Biotech Accelerator in Syracuse. There, young plants grown from tissue cultures are nurtured until they can be transplanted and eventually moved outdoors as the seed orchard expands over the next two years.

The next long-term goal is to obtain funding for a “century study” that would allow researchers to establish a couple 120-acre research sites to conduct a long-term comparison between wild-type, transgenic, back-crossed and hybrid American chestnuts. Powell expects the regulatory process will be complete before any of those trees began to pollinate and reproduce on their own. 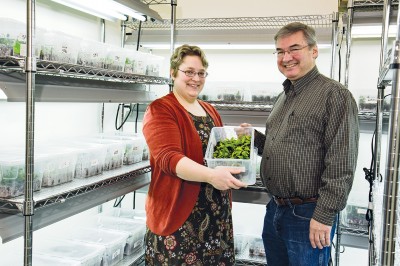 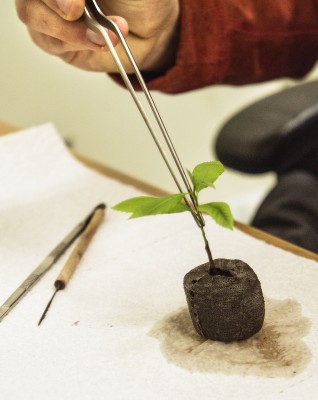 Caption: A plantlet is moved into a peat pellet for rooting. 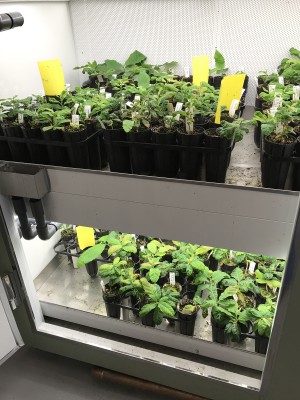