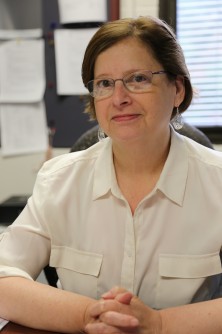 Ann I. Scher, PhD, professor of epidemiology at the F. Edward Hebert School of Medicine, Uniformed Services University of the Health Sciences, in Bethesda, MD.

Newswise — Bethesda, MD –Migraine suffers may be at greater risk for developing Parkinson’s disease or other movement disorders later in life, according to a new study published in the Sept. 17, 2014, online issue of Neurology ®, the medical journal of the American Academy of Neurology. Those who have migraine with aura may be at double the risk for developing these disorders.

“Migraine is the most common neurologic disorder in both men and women,” said study author Ann I. Scher, PhD, a professor of epidemiology at the F. Edward Hebert School of Medicine, Uniformed Services University of the Health Sciences, in Bethesda, MD. “It has been linked in other studies to cerebrovascular and heart disease. This new possible association is one more reason research is needed to understand, prevent and treat the condition.”

Scher and her colleagues from the National Institute on Aging, the University of Iceland, and the Icelandic Heart Association, studied 5,620 people between the ages of 33 and 65 for more than 25 years. At the beginning of the study, 3,924 of participants did not suffer from headaches, 1,028 had headaches without migraine symptoms, 238 had migraine with no aura, and 430 had migraine with aura. They later assessed whether participants had any symptoms of parkinsonism or had been diagnosed with Parkinson’s disease or had symptoms of Willis-Ekbom disease, a related disorder more commonly known as “restless legs syndrome (RLS).”

“These findings suggest that there may be a shared vulnerability to migraine and parkinsonism in a small number of people. This could be related to dysfunction in the brain messenger dopamine, head injury, cerebrovascular disease, or some other mechanism. More research should focus on exploring this possible link through focused longitudinal studies.”

The Uniformed Services University of the Health Sciences (USU), founded by an act of Congress in 1972, is the academic heart of the Military Health System. USU students are primarily active duty uniformed officers in the Army, Navy, Air Force and Public Health Service who receive specialized education in tropical and infectious diseases, TBI and PTSD, disaster response and humanitarian assistance, global health, and acute trauma care. A large percentage of the university’s more than 5,200 physician and 790 advanced practice nursing alumni are supporting operations around the world, offering their leadership and expertise. USU also has graduate programs in biomedical sciences and public health committed to excellence in research, and in oral biology. The University's research program covers a wide range of clinical and basic science important to both the military and public health. For more information, visit www.usuhs.edu.