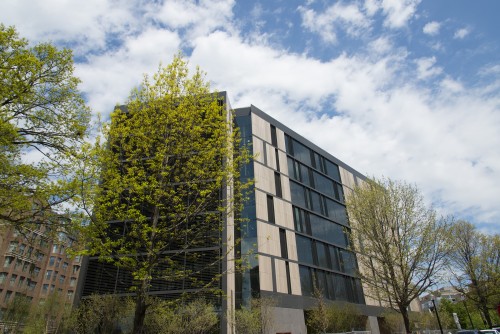 Newswise — WASHINGTON, DC (July 8, 2014 )—A state-of-the art facility recently opened by Milken Institute School of Public Health (Milken Institute SPH) at the George Washington University has earned a Platinum rating under the Leadership in Energy and Environmental Design (LEED) green building rating system. Platinum is the highest certification available under the system, which is operated by the U.S. Green Building Council (USGBC).

It is the only George Washington University building with LEED Platinum status and one of only 57 buildings in the District of Columbia and one of 1,102 buildings nationwide that have achieved this high honor. The building, with 115,000 square feet of gross floor space and a total of nine stories (seven above ground and two below), was designed by Boston-based Payette Architects along with D.C-based Ayers Saint Gross Architects.Others involved in the project for LEED status include Affiliated Engineers Inc., Wiles Mensch Corporation, Paladino and Company, Inc., and the Whiting-Turner construction company.

“This building represents a major milestone in the history of Milken Institute SPH,” said Lynn R. Goldman, MD, MS, MPH, the Michael and Lori Milken Dean of Public Health at Milken Institute SPH. “The achievement of LEED Platinum status demonstrates our commitment to building a high-performance green building, one that helps promote a healthier workplace and goes toward sustaining the environment.”

USGBC started the LEED certification program to encourage developers, architects and others to put in place energy efficient and green building design features. Certified Platinum buildings get that status based on the total number of points awarded within six categories: sustainable sites; water efficiency; energy and atmosphere; materials and resources; indoor environmental quality; and innovation in design.

Milken Institute SPH earned the LEED Platinum rating by featuring a number of sustainability components including:

• a green roof that reduces stormwater run-off and the heat island effect.• low-flow plumbing, a rainwater collection system and other features expected to reduce potable water consumption by more than 40 percent over the standard for commercial buildings;• use of native and adaptive plants for landscaping that require little or no water once established;• use of local, rapidly renewable or recycled building materials;• energy-saving lighting controls in offices, classrooms and conference rooms;• a heating and air conditioning system that uses green technologies such as active chilled beams and mass air displacement.

The Milken Institute SPH building, for the first time in the school’s history, houses all seven of the school’s academic departments under one roof and was designed to encourage interdisciplinary collaboration between faculty, students and staff. In addition to the green design, the building also boasts a number of features to help promote a healthy workplace. They include a central staircase that invites visitors, staff and students to walk instead of taking the elevators, a yoga studio, bike racks, standing desks and a location that encourages active commuting.

About Milken Institute School of Public Health at the George Washington University:

Established in July 1997 as the School of Public Health and Health Services, Milken Institute School of Public Health is the only school of public health in the nation’s capital. Today, nearly 1,400 students from almost every U.S. state and more than 43 countries pursue undergraduate, graduate and doctoral-level degrees in public health. The school also offers an online Master of Public Health, [email protected], and an online Executive Master of Health Administration, [email protected], which allow students to pursue their degree from anywhere in the world.