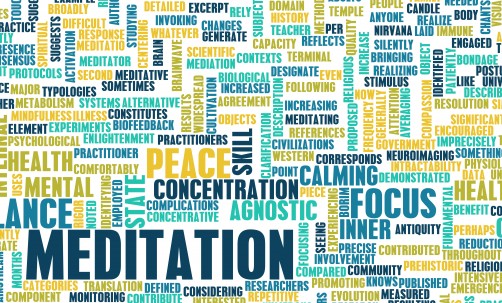 Newswise — WASHINGTON — Mindfulness meditation is an increasingly popular treatment for anxiety, but testing its effectiveness in a convincing way has been difficult. Now a rigorously designed, NIH-sponsored clinical trial has found objective physiological evidence that mindfulness meditation combats anxiety.

The researchers found that anxiety disorder patients had sharply reduced stress-hormone and inflammatory responses to a stressful situation after taking a mindfulness meditation course—whereas patients who took a non-meditation stress management course had worsened responses.

“Mindfulness meditation training is a relatively inexpensive and low-stigma treatment approach, and these findings strengthen the case that it can improve resilience to stress,” said lead author Elizabeth A. Hoge, MD, associate professor in Georgetown University Medical Center’s Department of Psychiatry.The study, published January 24 in Psychiatry Research, included 89 patients with generalized anxiety disorder, a condition of chronic and excessive worrying. The disorder is estimated to affect nearly 7 million Americans during any one year.

Hoge and her colleagues randomly divided the patients into two groups: One took an eight-week mindfulness based stress reduction course, the other—the control group—took an eight-week Stress Management Education course, which included general tips on the importance of good nutrition, sleep habits and other wellness topics. Both courses had similar formats but only the former included training in meditative techniques.

Many prior tests of meditation-based therapies have compared a meditation group to an untreated control group. Because participants in such studies are not “blinded”—they know if they are getting treatment or not—they are likely to be influenced by the placebo effect and other forms of expectancy bias. “The FDA would never approve a drug based on such a clinical trial design,” said Hoge.In this study, she added, participants would have had little or no expectancy bias, because they were all assigned to a treatment, and were not told which was the treatment of interest to the researchers.

Before and after the training course, participants underwent the Trier Social Stress Test, a standard experimental technique for inducing a stress response, in which the participants are asked at short notice to give a speech before an audience, and are given other anxiety-inducing instructions.

“We were testing the patients’ resilience,” Hoge said, “because that’s really the ultimate question—can we make people handle stress better?”

For the stress test, the team monitored blood-based markers of subjects’ stress responses, namely levels of the stress hormone ACTH and the inflammatory proteins IL-6 and TNF-α. The control group showed modest rises on the second test compared to the first, suggesting a worsening of their anxiety from having to endure the test again. By contrast, the meditation group showed big drops in these markers on the second test, suggesting that the meditation training had helped them cope.

Hoge and colleagues also found—as they reported in an earlier paper on this study—that the meditation group patients, compared to controls, experienced significantly greater reductions in self-reported measures of stress after their course.

The study adds to evidence for the effectiveness of mindfulness meditation in treating anxiety, Hoge said. She noted too that with its rigorous “active control” design, it provides a good paradigm for the future study of interventions such as meditation, to which patients cannot be blinded.Hoge hopes ultimately to expand the study of mindfulness-related treatments to other psychiatric conditions, and to compare such treatments to standard psychiatric drug therapies.

Hoge conducted the study while a postdoctoral researcher at Massachusetts General Hospital (MGH).

The study was funded by a grant (K23AT4432) from the National Center for Complementary and Integrative Health, part of the National Institutes of Health.

About Georgetown University Medical CenterGeorgetown University Medical Center (GUMC) is an internationally recognized academic medical center with a three-part mission of research, teaching and patient care (through MedStar Health). GUMC’s mission is carried out with a strong emphasis on public service and a dedication to the Catholic, Jesuit principle of curapersonalis -- or "care of the whole person." The Medical Center includes the School of Medicine and the School of Nursing & Health Studies, both nationally ranked; Georgetown Lombardi Comprehensive Cancer Center, designated as a comprehensive cancer center by the National Cancer Institute; and the Biomedical Graduate Research Organization, which accounts for the majority of externally funded research at GUMC including a Clinical and Translational Science Award from the National Institutes of Health. Connect with GUMC on Facebook (Facebook.com/GUMCUpdate), Twitter (@gumedcenter) and Instagram (@gumedcenter).