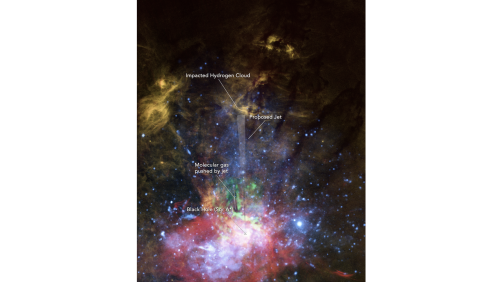 This is a composite view of X-rays, molecular gas, and warm ionized gas near the galactic center. The graphic of a translucent, vertical white fan is added to show the suggested axis of a mini-jet from the supermassive black hole at the galaxy’s heart. The orange-colored features are of glowing hydrogen gas. One such feature, at the top tip of the jet is interpreted as a hydrogen cloud that has been hit by the outflowing jet. The jet scatters off the cloud into tendrils that flow northward. Farther down near the black hole are X-ray observations of superheated gas colored blue and molecular gas in green. These data are evidence that the black hole occasionally accretes stars or gas clouds, and ejects some of the superheated material along its spin axis. 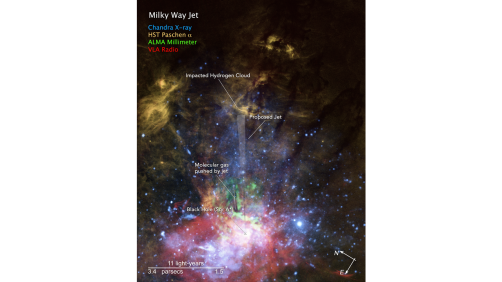 This is the compass/scale image for a composite view of X-rays, molecular gas, and warm ionized gas near the galactic center. The graphic of a translucent, vertical white fan is added to show the suggested axis of a mini-jet from the supermassive black hole at the galaxy’s heart. The orange-colored features are of glowing hydrogen gas. One such feature, at the top tip of the jet is interpreted as a hydrogen cloud that has been hit by the outflowing jet. The jet scatters off the cloud into tendrils that flow northward. Farther down near the black hole are X-ray observations of superheated gas colored blue and molecular gas in green. These data are evidence that the black hole occasionally accretes stars or gas clouds, and ejects some of the superheated material along its spin axis. 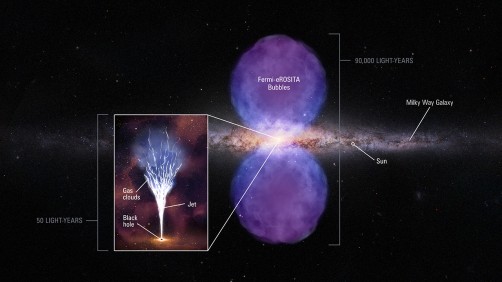 This schematic is based on multiwavelength observations of a suspected jet from the massive black hole at the center of our Milky Way galaxy. The wide view shows our galaxy edge-on, with two huge bubbles of plasma glowing in gamma-rays and X-rays. These are evidence for an explosive outburst from the black hole about 2 million years ago. Probing deep into the galaxy's core (inset), astronomers using the Hubble Space Telescope have captured a glowing cloud of hydrogen near the black hole. The interpretation is that the cloud is being hit by a narrow, columnated jet of material that was blasted out of the black hole merely 2,000 years ago. The black hole is still active, but on a smaller scale of energy output than previously known outbursts. When the jet slams into the hydrogen knot the outflow scatters into octopus-like tendrils that continue along a trajectory out of our galaxy. 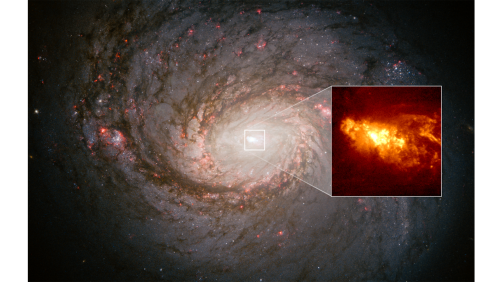 The nearby barred-spiral galaxy NGC 1068 serves as a proxy for helping astronomers understand the fireworks taking place at the center of our Milky Way galaxy, driven by eruptions from a supermassive black hole. Because we live inside the Milky Way, much of our view of the galaxy’s center is blocked by intervening clouds of gas and dust. But, looking 45 million light-years away at NGC 1068 gives astronomers a birds-eye view of similar black hole outbursts. The inset Hubble Space Telescope image resolves hydrogen clouds as small as 10 light-years across within 150 light-years of the core. The clouds are glowing because they are caught in a "searchlight" of radiation beamed out of the galaxy's black hole, which is larger and more active than the black hole in the heart of our galaxy.

Newswise — Our Milky Way's central black hole has a leak. This supermassive black hole looks like it still has the vestiges of a blowtorch-like jet dating back several thousand years. NASA's Hubble Space Telescope hasn't photographed the phantom jet but has helped find circumstantial evidence that it is still pushing feebly into a huge hydrogen cloud and then splattering, like the narrow stream from a hose aimed into a pile of sand.

This is further evidence that the black hole, with a mass of 4.1 million Suns, is not a sleeping monster but periodically hiccups as stars and gas clouds fall into it. Black holes draw some material into a swirling, orbiting accretion disk where some of the infalling material is swept up into outflowing jets that are collimated by the black hole's powerful magnetic fields. The narrow "searchlight beams" are accompanied by a flood of deadly ionizing radiation.

"The central black hole is dynamically variable and is currently powered down," said Gerald Cecil of the University of North Carolina in Chapel Hill. Cecil pieced together, like a jigsaw puzzle, multiwavelength observations from a variety of telescopes that suggest the black hole burps out mini-jets every time it swallows something hefty, like a gas cloud. His multinational team's research has just been published in the Astrophysical Journal.

Cecil was curious if there was a northern counter-jet as well. He first looked at archival spectra of such molecules as methyl alcohol and carbon monosulfide from the ALMA Observatory in Chile (Atacama Large Millimeter/submillimeter Array), which uses millimeter wavelengths to peer through the veils of dust between us and the galactic core. ALMA reveals an expanding, narrow linear feature in molecular gas that can be traced for 15 light-years back towards the black hole.

By connecting the dots, Cecil next found in Hubble infrared-wavelength images a glowing, inflating bubble of hot gas that aligns to the jet at a distance of at least 35 light-years from the black hole. His team suggests that the black hole jet has plowed into it, inflating the bubble. These two residual effects of the fading jet are the only visual evidence of it impacting molecular gas.

As it blows through the gas the jet hits material and bends along multiple streams. "The streams percolate out of the Milky Way's dense gas disk," said co-author Alex Wagner of Tsukuba University in Japan. "The jet diverges from a pencil beam into tendrils, like that of an octopus." This outflow creates a series of expanding bubbles that extend out to at least 500 light-years. This larger "soap bubble" structure has been mapped at various wavelengths by other telescopes.

Wagner and Cecil next ran supercomputer models of jet outflows in a simulated Milky Way disk, which reproduced the observations. "Like in archeology, you dig and dig to find older and older artifacts until you come upon remnants of a grand civilization," said Cecil. Wagner's conclusion: "Our central black hole clearly surged in luminosity at least 1 millionfold in the last million years. That sufficed for a jet to punch into the Galactic halo."

Previous observations by Hubble and other telescopes found evidence that the Milky Way's black hole had an outburst about 2-4 million years ago. That was energetic enough to create an immense pair of bubbles towering above our galaxy that glow in gamma-rays. They were first discovered by NASA's Fermi Gamma-ray Space Telescope in 2010 and are surrounded by X-ray bubbles that were discovered in 2003 by the ROSAT satellite and mapped fully in 2020 by the eROSITA satellite.

Hubble ultraviolet-light spectra have been used to measure the expansion velocity and composition of the ballooning lobes. Hubble spectra later found that the burst was so powerful that it lit up a gaseous structure, called the Magellanic stream, at about 200,000 light-years from the galactic center. Gas is glowing from that event even today.

To get a better idea of what's going on, Cecil looked at Hubble and radio images of another galaxy with a black hole outflow. Located 47 million light-years away, the active spiral galaxy NGC 1068 has a string of bubble features aligned along an outflow from the very active black hole at its center. Cecil found that the scales of the radio and X-ray structures emerging from both NGC 1068 and our Milky Way are very similar. "A bow shock bubble at the top of the NGC 1068 outflow coincides with the scale of the Fermi bubble start in the Milky Way. NGC 1068 may be showing us what the Milky Way was doing during its major power surge several million years ago."

The residual jet feature is close enough to the Milky Way's black hole that it would become much more prominent only a few decades after the black hole powers up again. Cecil notes that "the black hole need only increase its luminosity by a hundredfold over that time to refill the jet channel with emitting particles. It would be cool to see how far the jet gets in that outburst. To reach into the Fermi gamma-ray bubbles would require that the jet sustain for hundreds of thousands of years because those bubbles are each 50,000 light years across!"

For images, an illustration, and more information about this study and Hubble, visit: