Mining for Answers on Abandoned Mines 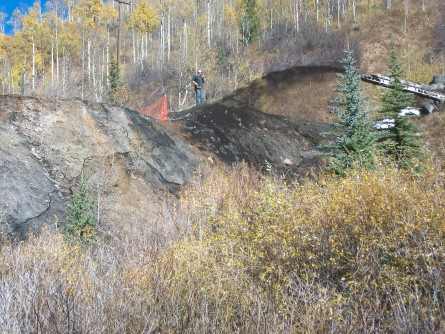 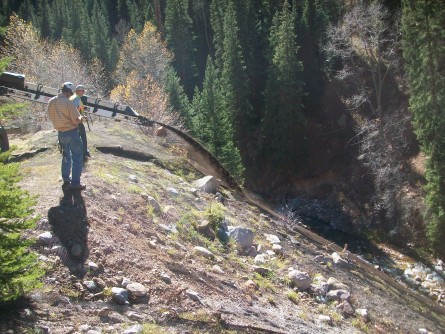 Biochar being applied to the disturbed, mine-affected slope.

In the western United States 160,000 abandoned mines contaminate soils in the region. Ippolito, associate professor of soil science at Colorado State University, hopes to solve this problem with biochar, a charcoal-like substance that can reduce the toxic consequences of mining for metals.

Biochar is made by burning plant material in a low-oxygen kiln. Ippolito proposes using western states plant materials such as dead lodge pole pine trees or pesky, nuisance trees—like the invasive tamarisk—as fodder for the kiln.

“I thought, why don’t we just use this stuff to make biochar?” said Ippolito. “It’s using local materials to solve a local problem.”

Abandoned mine sites are common in western states. Over the years, extracting precious metals like gold or silver left a legacy of high acidity in mining-affected soils.

“When you dig holes in the ground via mining and pull out rock that hasn’t seen the atmosphere in millions of years, the materials undergo a change,” said Ippolito. “These materials can start to acidify.”

When certain rock minerals are exposed to the atmosphere, they can form sulfuric acid. The sulfuric acid spreads like an infection, breaking down rocks around it. Some of these rocks contain heavy metals, like lead or copper, and most of the time the metals are harmless. The heavy metals turn into a problem when they become bioavailable—or when plants are able absorb them. Sulfuric acid makes metals more bioavailable to plants by releasing metals from rocks.

“A good analogy would be that the process sort of works just like the way our stomach acid works to break down food into components that are bioavailable to us,” said Ippolito.

The bioavailable heavy metals can pass into plant cell membranes and poison the plant. “You’ll find places near abandoned mines that are completely void of vegetation because of elevated bioavailable metals,” said Ippolito.

Most people cleaning up old mine sites mix lime into the soil to reduce acidity. Less acidity in the soil means less opportunity for plants to absorb heavy metals, because the metals change form from more to less bioavailable in the presence of lime.

Instead of lime, Ippolito wants to use biochar to reduce soil acidity. Biochar is typically produced by heating plant material in a sealed environment. “Basically you take wood, put it into a drum, seal it, and start a fire underneath it,” said Ippolito. “The material that’s left in the drum looks like charcoal.”

The research on the uses of biochar is extensive: it’s been tested as a water purifier, a fertilizer, a carbon sink and more. Ippolito’s biochar is special because it’s made from local trees that pose problems in western states. One of the trees is the lodge pole pine. Mountain pine beetles have decimated millions of acres of the lodge pole pine in western states and Canada. Rows and rows of trees lay like matchsticks. In dry regions, felled pines are a tinderbox for forest fires. Ippolito said making something useful from flammable, wasted trees can only be a good thing. He’s also proposing using tamarisk as a biochar feedstock. Tamarisk is an invasive species in western states. It clogs watersheds, robbing nutrients and water from native species.

The researchers made biochar from both trees and mixed it into four different soils from abandoned mine sites in Colorado and Idaho. They analyzed the bioavailability of the metals present in the soil. Both biochar types decreased soil acidity in all four soils. The biochar successfully interrupted the toxic combination of acidified soils and heavy metals, converting those metals to less bioavailable forms.

Ippolito’s next step is to take his locally-sourced biochar into the field. He said he’s ready to put it to use. “I’ve spent at least a decade testing biochars in the lab and greenhouse,” he said. “It’s finally time to apply the biochar to some mine sites.” Ippolito is working with the USDA Agricultural Research Service to test the biochar on a western U.S. mine site as well as in Missouri.

Ippolito collaborated with a team of scientists from the USDA Agricultural Research Service, the University of Idaho, and two private entities in Colorado (Confluence Energy in Kremmling, CO and Ascension Soil Co. in Evergreen, CO). Their work is published in the Journal of Environmental Quality.