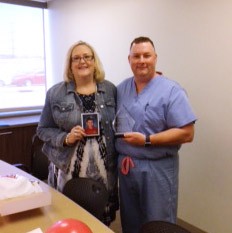 Vasculitis is a rare, autoimmune disease that causes systemic inflammation of the arteries.

The VF Recognizing Excellence in Diagnostics (RED) Award is given annually by the Vasculitis Foundation to a medical professional who made a quick diagnosis of vasculitis, thus enabling the patient to receive timely and appropriate treatment, potentially sparing the patient permanent and ongoing health complications.

“The goal of the VF-RED Award is to honor these healthcare professionals because they are a part of our goal to raise awareness about the need for earlier diagnosis of vasculitis,” says Joyce Kullman, Executive Director of the Vasculitis Foundation. “So often our patients fail to get an early diagnosis because vasculitis symptoms can mimic so many other conditions. We created the VF-RED Award to single out those medical professionals who did catch the disease in its early stages, thus improving the outcome for the patient.”

Raines was nominated for the award by his patient, Jodi Rezac, who was under his care while she was pregnant in 2003. As her OBGYN, Raines was carefully monitoring Rezac’s health and it was the result of a routine urine test that first alerted him to a potential problem. Jodi was showing protein excretion in her urine (proteinuria) which isn’t necessarily unusual during pregnancy. However, in Jodi’s case it was happening much earlier in the pregnancy than normal.

“She was complaining of problems with her nose and a loss of sense of smell. That is a very unusual complaint from a patient,” explained Dr. Raines. “I remembered, from my training, that there was a specific named disease, Wegener’s granulomatosis, where you see nasal lesions in addition to inflammation in the kidney that can cause proteinuria.” Further testing confirmed that Rezac did have vasculitis. She was immediately placed on prednisone and methotrexate which is the standard therapy for the disease.

Kullman says the VF honors doctors such as Raines because his early diagnosis made a critical difference in improving Rezac’s outcome. “One of the goals of the VF is to continue our outreach into the medical community,” says Kullman. “This award is part of our effort to put the disease on the radar of doctors who normally wouldn’t be assuming their patient actually has a rare disease like vasculitis.”

About the Vasculitis FoundationSince 1986, the Vasculitis Foundation has empowered patients through disease education, raising awareness of vasculitis in the general public and medical community, and funding research to determine the cause, develop more effective treatments, and discover a cure. The VF is committed to improving the lives of current and future patients and is positioned as the definitive resource for patients, family members, medical professionals and researchers seeking information about vasculitis.