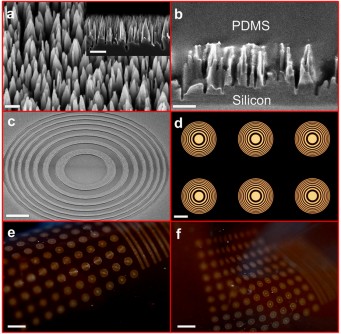 Tiny silicon nano-wire towers make up dark regions of the flexible Fresnel zone lenses. Each individual lens resembles a bull’s-eye of alternating light and dark. Arrays of lenses formed within a flexible polymer bend and stretch into different configurations. 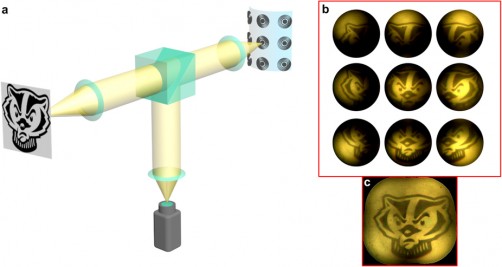 Their new approach created the first-ever flexible Fresnel zone plate microlenses with a wide field of view — a development that could allow everything from surgical scopes to security cameras to capture a broader perspective at a fraction of the size required by conventional lenses.

Led by Hongrui Jiang, professor of electrical and computer engineering at UW–Madison, the researchers designed lenses no larger than the head of a pin and embedded them within flexible plastic. An array of the miniature lenses rolled into a cylinder can capture a panorama image covering a 170-degree field of view.

“We got the idea from compound eyes,” says Jiang, whose work was published in the Oct. 30 issue of the journal Scientific Reports. “We know that multiple lenses on a domed structure give a large field of view.”

And the researchers can freely reconfigure the shape of the lens array, because rather than relying on conventional optics for focusing, they used Fresnel zone plates.

Conventional lenses use refraction — the way light changes direction while passing through different substances (typically stiff, translucent ones, like glass) — to focus it on a single point. Named for 19th century engineer Augustin-Jean Fresnel, the zone plates focus by diffraction — bending light as it passes the edge of a barrier.

Each of Jiang's half-millimeter diameter lenses resembles a series of ripples on water emanating out from the splash of a stone. In bull’s-eye fashion, each concentric ring alternates between bright and dark. The distance between the rings determines the optical properties of the lens, and the researchers can tune those properties in a single lens by stretching and flexing it.

“The dark areas must be very dark,” explains Jiang, whose work is funded by the National Institutes of Health. “Essentially, it has to absorb the light completely. It’s hard to find a material that doesn’t reflect or transmit at all.”

Rather than laying down layers of black silicon on top of a clear backdrop, Jiang and his team took a bottom-up approach to generate their lenses. First they patterned aluminum rings on top of solid silicon wafers, and etched silicon nanowires in the areas between aluminum rings. Then they seeped a polymer between the silicon nanowire pillars. After the plastic support solidified, they etched away the silicon backing, leaving bull’s-eye patterned black silicon embedded in supple plastic.

This approach gave their lenses unprecedented crisp focusing capabilities, as well as the flexibility that enables them to capture a large field of view.

Jiang and his team — including postdoctoral scholar Mohammad J. Moghimi, graduate student Jayer Fernandes and recent graduate Aditi Kanhere — are exploring ways to integrate the lenses into existing optical detectors and directly incorporate silicon electronic components into the lenses themselves. 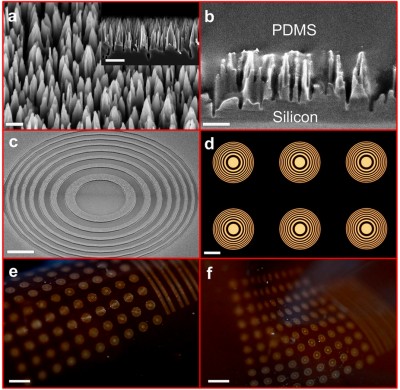 Caption: Tiny silicon nano-wire towers make up dark regions of the flexible Fresnel zone lenses. Each individual lens resembles a bull’s-eye of alternating light and dark. Arrays of lenses formed within a flexible polymer bend and stretch into different configurations. 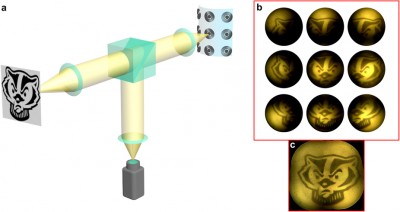