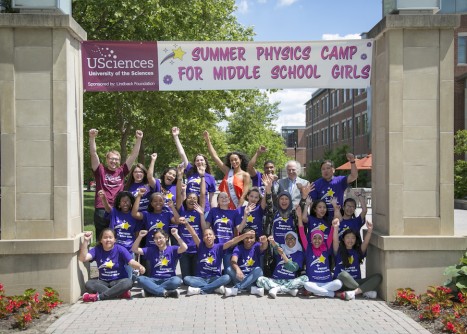 Newswise — Miss USA Kára McCullough knows a thing or two about the importance of science and encouraging girls to pursue their passions in STEM related fields. McCullough earned a bachelor of science degree in chemistry with a concentration in radiochemistry from South Carolina State University which paved the way to her current career as a scientist for the Nuclear Regulatory Commission (NRC).

On sabbatical from the NRC during her reign as Miss USA, McCullough visited the campers at the USciences Physics Wonder Girls STEM Camp on June 26 to encourage the girls to pursue their interests in STEM careers.

“Ask questions. It’s so important,” McCullough implored the girls. “Don’t ever, ever, feel like someone is looking at you like you are an outcast because you are asking a question. I would literally, be the only one in any of my classes asking questions because I was able to comprehend stuff. And those are the (people) who succeed. And individuals that ask questions, are mostly sought out as well for internships and jobs because you bring a different perspective to the meeting or a science project that you are doing, you are also showing interest and that’s what is important.”

The free camp, created by USciences Associate Professor Dr. Roberto Ramos, is engaging two dozen local girls interested in science. At the camp the students learn how to build and operate submersible robots; discover the science of pressure, waves, and electricity; and learn about careers in science from women working in various fields.

McCullough, who was raised in Virginia Beach, is the founder of a community outreach program which uses interactive activities to cultivate a passion for STEM among children and has continued this effort after being crowned Miss USA in May 2017.

After speaking with campers, she went around to the various stations where the girls showcased various hands-on STEM activities.

“Anything that’s worth having isn’t going to be easy,” she said. “You ladies are set apart so much that when you get to college, it’s going to be a breeze for you because your passions are already there. You are setting yourselves up to say ‘I’m coming to college to major in chemical engineering because I know I am capable of doing it.’ But I’m going to be honest, you are going to have to study. It’s very important.”

The one-week held in two sessions concludes with the Physics Wonder Girls Show where the students give a presentation about what they took away from the experience. Dr. Ramos was inspired to create the camp by his daughter Kristiana, who expressed interest in the sciences at an early age. What started as a small idea turned into a bigger vision of inspiring middle school girls to pursue careers in STEM (science, technology, engineering and mathematics) fields.