Mississippi State Researcher Among Those Working on New Flu Vaccine 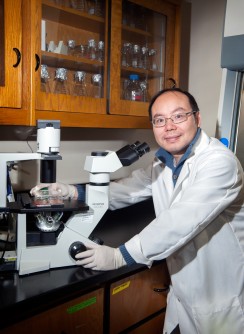 Newswise — STARKVILLE, Miss.—In the midst of one the worst overall influenza seasons, a Mississippi State researcher is part of an international effort to develop next season’s vaccines. Dr. Henry Wan, an associate professor at the university’s College of Veterinary Medicine, has been awarded a National Institutes of Health RO1 grant to develop better ways of determining new flu vaccines. He is a 2002 doctor of philosophy graduate of the college.

Dr. Kent Hoblet, veterinary college dean, said R01 “is the original and historically oldest” NIH grant mechanism. In addition to being highly sought, the awards typically have a funding rate of less than 10 percent of the total submitted proposals, he noted.

To determine funding, Hoblet said the federal agency scores applications and “Dr. Wan achieved a perfect score, a very rare and difficult feat.” Determining what seasonal flu viruses to vaccinate against is a long, time-consuming process that depends on samples analyzed at laboratories around the world. Each year, thousands of scientists at more than 130 influenza centers in 106 countries, along with numerous vaccine companies and surveillance programs, generate data to develop the treatments. The product of this combined effort is considered the world’s best defense against the flu, though officials at the Atlanta, Georgia-based U.S. Centers for Disease Control announced recently that the current vaccine has been only 23 percent effective against current strains.

Wan, also a master’s degree graduate in computer science from MSU’s Bagley College of Engineering, was a senior scientist in the CDC’s Influenza Division before returning to the Starkville campus. He said he and his MSU team will be developing a “machine learning” process in which computational methods are used to examine genome sequences to discover any critical changes or mutations among viruses. Mutations determine viral immunogenicity—the ability for the virus to induce immune response in humans—he explained. Information derived from the investigation then will be entered into a computerized model to determine the best vaccine selections for combating the viruses. “Vaccine development is expensive, labor intensive and depends on many laboratories around the world,” Wan said. “It also involves the use of live viruses and growing them in the lab. “The machine learning method involves looking at the genetic makeup of viruses, along with their changes through history and over geographic regions,” he continued. Because genomic sequences may be obtained directly using clinical samples, “this method can save us from growing the viruses.”

New vaccine selections need to be made as early as possible since five to six months may be required to develop the first batch of vaccinations. Wan expressed hope that the MSU team will help shorten that time frame through the use of an antigenic cartography system he developed with earlier NIH funding.Hoblet said the college is proud to have Wan’s expertise and is “thankful for this opportunity to elevate this work to achieve international impact.” In expressing gratitude for NIH’s support of his work, Wan said, “Without waiting for virus characterization in laboratories, we can get vaccines developed quickly and help lower the risks for the U.S. population, and also people and animals around the world.” Research reported in this release is supported by the National Institutes of Health under award number R01 AI116744-01.