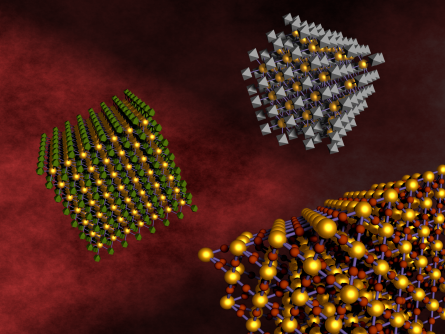 DNA linkers allow different kinds of nanoparticles to self-assemble and form relatively large-scale nanocomposite arrays. This approach allows for mixing and matching components for the design of multifunctional materials.

Newswise — UPTON, NY-Scientists at the U.S. Department of Energy's Brookhaven National Laboratory have developed a general approach for combining different types of nanoparticles to produce large-scale composite materials. The technique, described in a paper published online by Nature Nanotechnology on October 20, 2013, opens many opportunities for mixing and matching particles with different magnetic, optical, or chemical properties to form new, multifunctional materials or materials with enhanced performance for a wide range of potential applications.

The approach takes advantage of the attractive pairing of complementary strands of synthetic DNA-based on the molecule that carries the genetic code in its sequence of matched bases known by the letters A, T, G, and C. After coating the nanoparticles with a chemically standardized "construction platform" and adding extender molecules to which DNA can easily bind, the scientists attach complementary lab-designed DNA strands to the two different kinds of nanoparticles they want to link up. The natural pairing of the matching strands then "self-assembles" the particles into a three-dimensional array consisting of billions of particles. Varying the length of the DNA linkers, their surface density on particles, and other factors gives scientists the ability to control and optimize different types of newly formed materials and their properties.

"Our study demonstrates that DNA-driven assembly methods enable the by-design creation of large-scale 'superlattice' nanocomposites from a broad range of nanocomponents now available-including magnetic, catalytic, and fluorescent nanoparticles," said Brookhaven physicist Oleg Gang, who led the research at the Lab's Center for Functional Nanomaterials (CFN). "This advance builds on our previous work with simpler systems, where we demonstrated that pairing nanoparticles with different functions can affect the individual particles' performance, and it offers routes for the fabrication of new materials with combined, enhanced, or even brand new functions."

Future applications could include quantum dots whose glowing fluorescence can be controlled by an external magnetic field for new kinds of switches or sensors; gold nanoparticles that synergistically enhance the brightness of quantum dots' fluorescent glow; or catalytic nanomaterials that absorb the "poisons" that normally degrade their performance, Gang said.

"Modern nano-synthesis methods provide scientists with diverse types of nanoparticles from a wide range of atomic elements," said Yugang Zhang, first author of the paper. "With our approach, scientists can explore pairings of these particles in a rational way."

Pairing up dissimilar particles presents many challenges the scientists investigated in the work leading to this paper. To understand the fundamental aspects of various newly formed materials they used a wide range of techniques, including x-ray scattering studies at Brookhaven's National Synchrotron Light Source (NSLS) and spectroscopy and electron microcopy at the CFN.

For example, the scientists explored the effect of particle shape. "In principle, differently shaped particles don't want to coexist in one lattice," said Gang. "They either tend to separate into different phases like oil and water refusing to mix or form disordered structures." The scientists discovered that DNA not only helps the particles mix, but it can also improve order for such systems when a thicker DNA shell around the particles is used.

They also investigated how the DNA-pairing mechanism and other intrinsic physical forces, such as magnetic attraction among particles, might compete during the assembly process. For example, magnetic particles tend to clump to form aggregates that can hinder the binding of DNA from another type of particle. "We show that shorter DNA strands are more effective at competing against magnetic attraction," Gang said.

For the particular composite of gold and magnetic nanoparticles they created, the scientists discovered that applying an external magnetic field could "switch" the material's phase and affect the ordering of the particles. "This was just a demonstration that it can be done, but it could have an application-perhaps magnetic switches, or materials that might be able to change shape on demand," said Zhang.

The third fundamental factor the scientists explored was how the particles were ordered in the superlattice arrays: Does one type of particle always occupy the same position relative to the other type-like boys and girls sitting in alternating seats in a movie theater-or are they interspersed more randomly? "This is what we call a compositional order, which is important for example for quantum dots because their optical properties-e.g., their ability to glow-depend on how many gold nanoparticles are in the surrounding environment," said Gang. "If you have compositional disorder, the optical properties would be different." In the experiments, increasing the thickness of the soft DNA shells around the particles increased compositional disorder.

These fundamental principles give scientists a framework for designing new materials. The specific conditions required for a particular application will be dependent on the particles being used, Zhang emphasized, but the general assembly approach would be the same.

Said Gang, "We can vary the lengths of the DNA strands to change the distance between particles from about 10 nanometers to under 100 nanometers-which is important for applications because many optical, magnetic, and other properties of nanoparticles depend on the positioning at this scale. We are excited by the avenues this research opens up in terms of future directions for engineering novel classes of materials that exploit collective effects and multifunctionality."

The Center for Functional Nanomaterials is one of five DOE Nanoscale Science Research Centers (NSRCs), national user facilities for interdisciplinary research at the nanoscale, supported by the DOE Office of Science. Together the NSRCs comprise a suite of complementary facilities that provide researchers with state-of-the-art capabilities to fabricate, process, characterize and model nanoscale materials, and constitute the largest infrastructure investment of the National Nanotechnology Initiative. The NSRCs are located at DOE's Argonne, Brookhaven, Lawrence Berkeley, Oak Ridge and Sandia and Los Alamos National Laboratories. For more information about the DOE NSRCs, please visit http://science.energy.gov.

The National Synchrotron Light Source (NSLS) provides intense beams of infrared, ultraviolet, and x-ray light for basic and applied research in physics, chemistry, medicine, geophysics, and environmental and materials sciences. Supported by the Office of Basic Energy Sciences within the U.S. Department of Energy, the NSLS is one of the world's most widely used scientific facilities. For more information, visit http://www.nsls.bnl.gov.

DOE's Office of Science is the single largest supporter of basic research in the physical sciences in the United States, and is working to address some of the most pressing challenges of our time. For more information, please visit science.energy.gov

Scientific paper: "A general strategy for the DNA-mediated self-assembly of functional nanoparticles into heterogeneous systems" [http://dx.doi.org/10.1038/nnano.2013.209] NOTE: This link will not be live until after the embargo lifts Previous research: