Model Predicts How Forests Will Respond to Climate Change 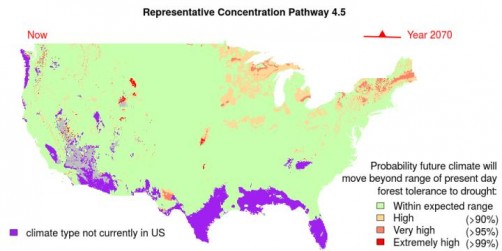 This image shows the probability future climate will move beyond range of present day forest tolerance to drought.

The Tolerance Distribution Model (TDM) is the first to use the tolerances of different types of forests to drought, flood and shade to determine how the forests may respond to future climate change. In contrast to existing methods, the new approach can be applied at a continental scale while maintaining a direct link to ecologically relevant stressors.

In the northeastern U.S., the model projects forests of maple/beech/birch, spruce/fir and white/red/jack pine combinations will be ill-suited to withstand predicted drought conditions by the latter half of the 21st century. Other forested areas that were identified as being at risk from drought included the northern Great Plains and the higher elevations of the Rocky Mountains.

"Until now, our ability to predict exactly how and where forest characteristics and distributions are likely to be altered as a result of climate change has been rather limited," said Liénard, a postdoctoral researcher and the paper's first author. "With our model, it is possible to identify which forests are at the greatest risk from future environmental stressors. Forest managers and private landowners could then take steps like planting drought tolerant seedlings and saplings to prepare."

Other continents, ecosystems to be modeled

To create the forest tolerance model, the researchers collected physiological data on the abilities of U.S. tree species to cope with drought, varying levels of sunlight and flooding. They assigned tolerance rankings to each of the 400,000 forest plots in the U.S. Department of Agriculture's Forestry Inventory and Analysis Program based on the composition of the trees in each plot and their corresponding physiological characteristics.

They integrated data on the projected changes in annual U.S. temperature and precipitation from the Intergovernmental Panel on Climate Change to determine how each plot is likely to fare in response to changing climatic conditions through the end of the century.

The researchers plan to develop versions of the TDM that can be applied to agricultural systems as well as other terrestrial and aquatic ecological systems.

"We are working on modeling other continents and have already gained access to European and Asian forest data," Strigul said. "Our work is really just getting started."