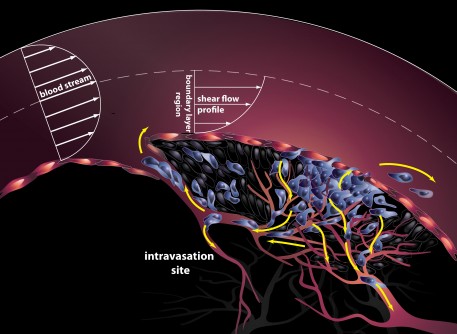 The University of Southern California, Oregon Health and Science University, and The Scripps Research Institute.

Illustration of the early stage of metastasis, called "intravasation." Tumor cells (blue) in contact with the bloodstream experience shear forces that can be strong enough to exceed the adhesion forces keeping them attached to the primary tumor. Once released into the bloodstream, they become circulating tumor cells capable of spreading the disease to other sites

Newswise — Cancer metastasis, the escape and spread of primary tumor cells, is a common cause of cancer-related deaths. But metastasis remains poorly understood. Studies indicate that when a primary tumor breaks through a blood vessel wall, blood's "stickiness" tears off tumor cells the way a piece of tape tears wrapping paper. Until now, no one knew the physical forces involved in this process, the first step in metastasis. Using a statistical technique employed by animators, scientists created a new computer simulation that reveals how cancer cells enter the bloodstream. The researchers present their work in a paper accepted to the American Institute of Physics (AIP) journal Physics of Fluids.

To create the simulation, a group of scientists from the University of Southern California in Los Angeles, Oregon Health and Science University in Portland, Ore., and The Scripps Research Institute in La Jolla, Calif., first had to describe the physics of the process. The researchers couldn't directly measure the fluid forces acting on a tumor cell in the body. Instead, they imaged blood flowing at different velocities over a breast cancer cell on a glass plate. Then, they bridged the gap between known and unknown with an Active Shape Model, a statistical technique that animators use to create furry monsters. Active Shape Models track the shape of an object as it dynamically deforms. When combined with the experimental data, the modeling enabled the team to compute the fluid forces acting on the cell, and that in turn helped them tune the simulation.

The study is an important first step toward understanding the mechanical properties of cancer cells and how they travel over the course of the disease, the researchers say. The ultimate goal is developing computer simulations of metastasis' multi-step process, and thus new therapies to target metastasis.

Article: “A low-dimensional deformation model for cancer cells in flow” is accepted for publication in Physics of Fluids.