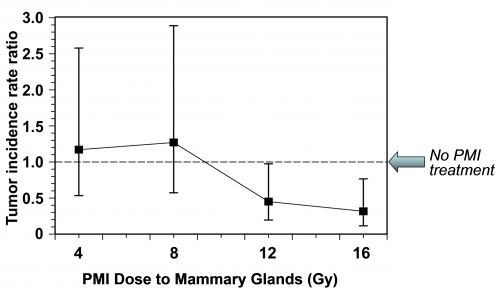 Breast-cancer rates in breast cancer-prone mice whose mammary glands were treated with different doses of prophylactic mammary irradiation (PMI ), compared with mice whose mammary glands were not treated. At moderate PMI doses of 12 or 16 Gy—much lower than that used to treat the affected breast—the breast cancer rate was reduced by about three-fold.

Newswise — NEW YORK, NY (January 23, 2014) — Survivors of breast cancer have a one in six chance of developing breast cancer in the other breast. But a study conducted in mice suggests that survivors can dramatically reduce that risk through treatment with moderate doses of radiation to the unaffected breast at the same time that they receive radiation therapy to their affected breast. The treatment, if it works as well in humans as in mice, could prevent tens of thousands of second breast cancers. The study, conducted by researchers at Columbia University Medical Center (CUMC), was published on December 20 in the online journal PLoS One.

“Over the past decades, we’ve had great success in treating breast cancer, and the 15-year survival rate is now 77 percent,” said study leader David J. Brenner, PhD, director of CUMC’s Center for Radiological Research and the Higgins Professor of Radiation Biophysics. “Unfortunately, breast cancer survivors have a several times higher risk of developing cancer in their other breast, compared with healthy women of the same age.”

“While drugs such as tamoxifen and aromatase inhibitors can reduce the risk somewhat, at least for women with estrogen receptor-positive tumors, the long-term risks of a second breast cancer in the unaffected breast remain high. Because of these risks, approximately 10 to 20 percent of breast cancer survivors in the U.S. undergo prophylactic mastectomy of their other breast,” said Dr. Brenner.

The idea for prophylactic mammary irradiation (PMI) of the unaffected breast stems from an earlier study of standard whole-breast irradiation after lumpectomy. In that study, Dr. Brenner found that radiation is highly effective at killing premalignant cells, not only in the quadrant of the breast where the primary tumor was located, but also in the other three quadrants, where premalignant cells are generally considered to be unrelated to the primary tumor. “So, we thought, why can’t we treat the other breast with a moderate dose of radiation and kill any premalignant cells that could lead to second cancers?” said Dr. Brenner.

The critical question was whether treating the breast with a moderate dose of radiation would indeed lower the overall risk of a second cancer. “We know that there will be a balance between radiation killing premalignant cells and radiation producing premalignant cells, but it seemed that using the right radiation dose would put the balance strongly toward lowering the cancer risk,” Dr. Brenner said.

The current study tested this hypothesis by performing PMI on transgenic mice that have a high risk of developing breast cancer, simulating the unaffected breast of a breast cancer survivor. Lead shields were positioned so that one side of each mouse was shielded from the radiation. As predicted, a moderate dose of radiation reduced the breast cancer risk in the treated side by a factor of about 3. The researchers are now planning to test PMI in a clinical trial.

If PMI proves to be successful in patients, it could be used as an adjunct to tamoxifen or aromatase inhibitors for women with estrogen receptor-positive tumors and as a standalone therapy for those with estrogen-receptor negative tumors, who do not benefit from drug therapy. In either case, PMI could be performed concurrently with radiotherapy of the affected breast.

PMI could have a substantial clinical impact. At present, there are more than 2.6 million breast cancer survivors in the U.S., according to the American Cancer Society. “About 160,000 of these women are likely to develop cancer in their other breast,” said Dr. Brenner. “If PMI does, in fact, reduce the incidence of cancer by three-fold, as suggested by our results, about 100,000 cases of breast cancer could be prevented.”

“Whether PMI would work for women with BRACA1 or BRACA2 mutations, which greatly increase one’s risk for breast and/or ovarian cancer, is another story,” said Dr. Brenner. “We don’t know that. Our next mouse study will look at the effects of PMI in BRACA1 mice.”

The paper is titled, “Potential Reduction of Contralateral Second Breast-Cancer Risks by Prophylactic Mammary Irradiation: Validation in a Breast-Cancer-Prone Mouse Model.” The other contributors are Igor Shuryak, Lubomir B. Smilenov, and Norman J. Kleiman, all at CUMC.

This study was supported by a Pilot Study Award Grant from the Irving Institute for Clinical and Translational Research, Columbia University, and by grant from NIH’s National Institute of Allergy and Infectious Diseases (U19 AI67773).