High-speed video of the student project that inspired this research. This scaled-down recreation of the Boston Molasses Flood was performed by Harvard University undergraduates Rosa Bonilla, Grace Kossia, and Emily Woolway as part of their final project in an introductory fluid dynamics course. To match the Molasses Flood’s conditions at a smaller physical scale, the students used corn syrup rather than molasses. The video shows the Molasses Flood area from the northwest and was filmed at 500 frames per second. 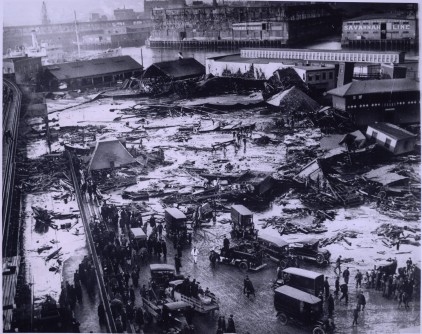 The aftermath of the Boston Molasses Flood of January 1919. The original site of the collapsed molasses tank is toward the upper left of the image. Wreckage of the tank is visible in the center and upper right of the photo near the light-colored warehouse. The remains of other buildings and homes destroyed by the molasses and swept into the North End Park are visible in the foreground. The damaged Boston Elevated Railroad track lies along the left edge of the picture. 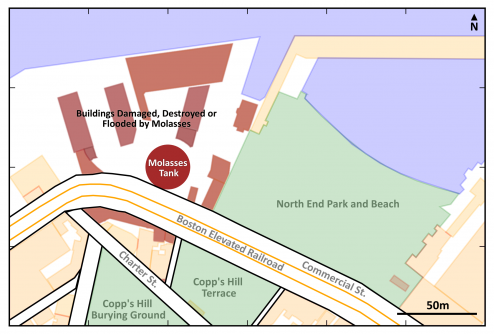 Diagram of the area affected by the Molasses Flood. Buildings damaged, destroyed, or flooded by molasses are shaded in brown. Molasses also flooded the surrounding streets and poured into the harbor. One account in The Boston Globe claimed, “Molasses […] piled up so quickly that it was higher than the curbing in every place within two blocks of the scene.”

Newswise — Washington, D. C., November 21, 2016 -- Fluid dynamics met history for a team of researchers who studied the Boston Molasses Flood, a disaster that claimed 21 lives, injured 150 and flattened buildings in the Commercial Street area of Boston in 1919. During the 69th Annual Meeting of the APS Division of Fluid Dynamics held in Portland, Oregon, Nov. 20-22, 2016, a trio of fluid dynamics physicists at Harvard University will explain how they were inspired to study this event by a group of undergraduates who produced a parody rap video about the flood for a project in their fluid dynamics course. The trio examined this historic, yet not well known, event from a scientific perspective.

On Jan. 15, 1919, shortly after 12:40 p.m. local time, a giant storage tank collapsed in Boston’s crowded North End, releasing more than 8.7 million liters of molasses. The initial wave was 7.6 meters tall, almost as tall as a goalpost in American football, moving more than 15 meters per second, about 11 miles per hour. It only took moments for the molasses to engulf the Commercial Street area, flattening buildings, damaging the elevated train, killing 21 people, and injuring 150 more. This research called for a unique approach, combining conventional lab-based research with exhaustive research into historical records.

“To gather relevant details about the flood and its aftermath, I’ve read hundreds of pages of historical accounts and contemporary newspaper articles, studied century-old maps of buildings in the area, and even called the National Weather Service to request historic meteorological data,” said Nicole Sharp, a science communicator and aerospace engineer.

Harvard graduate student Jordan Kennedy performed a rheological survey, studying the flow properties, of blackstrap molasses to explore its viscosity and how it is affected by temperature. They conducted experiments on cold, spreading molasses, comparing results with models that include gravity from the literature. “The goal is to take our knowledge and understanding of highly viscous spreading flows and apply that to the Boston Molasses Flood. Ultimately, we want to use the Molasses Flood as a vehicle for fluid dynamics education and outreach and use it to engage students and the public with physics,” said Sharp.

As a non-Newtonian fluid, the relationship between molasses viscosity and its rate of deformation is not constant, as it is for most familiar fluids. More specifically, molasses is shear-thinning which means that deforming it at a faster rate, i.e. flowing faster, reduces its viscosity, thereby allowing it to flow faster.

However, at the temperatures relevant to the Boston Molasses Flood, this effect is extremely small. It turns out that temperature has a much greater effect. Cooling molasses from 10 to 0 degrees Celsius increases its viscosity by a factor of 3, and as the molasses cools further, the increase in viscosity becomes more extreme.

At the time of the collapse, molasses stored in the tank was likely warmer than the surrounding air by about 5 degrees Celsius. A fresh shipment of molasses had arrived from the Caribbean to top off the tank only two days prior, and it hadn’t fully cooled to Boston winter temperatures. Once the tank split and the molasses spilled over the waterfront, though, it would have cooled more rapidly, especially in the dropping temperatures after the sunset. The viscosity of the molasses would have then increased dramatically with this cooling, complicating attempts to rescue victims and to begin recovery and cleanup.

The physics of the Molasses Flood are relevant to other accidents that affect the public, including industrial spills or breaking levees, but the ultimate goal of this work is educational. “Once I delved into the history of the Boston Molasses Flood, I was surprised by how rich a subject it is, especially for engineering education,” said Sharp. It offers the opportunity to address fluid dynamics, structural mechanics, engineering ethics, history and law all in one topic. “We hope that, by shedding some light on the physics of a fascinating and surreal historical event, we can inspire a greater appreciation for fluid dynamics among our students and the public.”

USEFUL LINKSMain meeting website: http://apsdfd2016pdx.org/Technical program: http://meetings.aps.org/Meeting/DFD16/Content/3199Meeting/Hotel site: http://apsdfd2016pdx.org/?page_id=30Press Room: http://www.aps.org/newsroom/index.cfm PRESS REGISTRATIONWe will grant free registration to credentialed journalists and professional freelance journalists. If you are a reporter and would like to attend, contact Julia Majors ([email protected], 301-209-3103) who can also help with setting up interviews and obtaining images, sound clips, or background information. LIVE MEDIA WEBCASTA press briefing featuring a selection of newsworthy research will be webcast live from the conference on Monday, Nov. 21. The first briefing at 2:00 p.m. (EST) is about the forensic analysis of blood spatter and how changing the position of your fingers can help you swim faster. The second one at 4:00 p.m. (EST) is about cat's Velcro-like tongues and bubbles. More information can be found at the following link: https://www.aps.org/units/dfd/pressroom/ ABOUT The DIVISION OF FLUID DYNAMICS OF THE AMERICAN PHYSICAL SOCIETY The Division of Fluid Dynamics of the American Physical Society exists for the advancement and diffusion of knowledge of the physics of fluids with special emphasis on the dynamical theories of the liquid, plastic and gaseous states of matter under all conditions of temperature and pressure. https://www.aps.org/units/dfd/

In a sea of sticky molasses: The physics of the Boston Molasses Flood; The 69th Meeting of The American Physical Society – Division of Fluid Dynamics