Researchers find key to a critical enzyme’s many roles 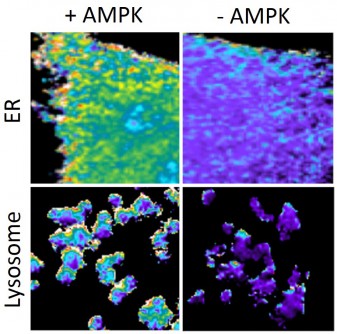 The “molecular spies” report AMPK activity in red and yellow. It is active to different degrees in different cellular compartments (top, bottom) and not active at all in cells missing AMPK (right). ER, endoplasmic reticulum.

Newswise — The enzyme AMPK initiates a dizzying array of cellular activities, from breaking down worn-out cellular parts to turning on energy production. How does a single protein, activated by a single switch, fulfill so many different tasks without getting them mixed up? To get at such a complex question, cell biologists at Johns Hopkins designed several molecular tools that allowed them to watch, measure and manipulate the activity of the enzyme AMPK in individual compartments within the cell. The new tools have confirmed that at least some of AMPK’s ability to multitask comes from variations in its activity level in each cellular compartment.

Takanari Inoue, Ph.D., an associate professor of cell biology at the Johns Hopkins University School of Medicine, compares a cell and its compartments to a house with many rooms. “We suspected that the AMPK in some rooms was working harder than in others. We set up spies in each room to monitor its activity. Then we devised a set of saboteurs to shut down AMPK’s activity in one room at a time so we could see the effects on the cell,” he says.

A summary of the study will appear online in the journal Cell Reports on April 16.

AMPK is a near-ubiquitous enzyme that maintains cells’ energy supplies. The main energy currency in cells is a molecule called adenosine triphosphate (ATP) that, as the name suggests, has three phosphate groups attached to it. Energy is released from ATP when one or two of the phosphate groups are removed, leaving adenosine diphosphate (ADP) or adenosine monophosphate (AMP), respectively. If either of those molecules binds to AMPK, the enzyme’s shape changes to reveal its activation site, enabling other enzymes to activate it by adding a phosphate group to the site. Once activated, AMPK will add its phosphate group to other proteins, ultimately causing diverse changes in the cell, such as helping it grow in size, break down worn-out cellular parts, develop directionality or turn genes “on.” It was unknown how a single protein could produce such varied outcomes, but one hypothesis was that its activity levels were different in different compartments of the cell, allowing it to affect different sets of other proteins.

To see what it was up to, Inoue’s team designed a series of special molecules to “spy on” AMPK in specific compartments within lab-grown cells from a variety of species. Once the spies touched AMPK, they emitted light that could be seen and measured. In unstressed cells, the team found varying levels of AMPK activity in different cellular compartments. The nucleus, cytoplasm and cell membrane had the least activity, while the Golgi apparatus and the endoplasmic reticulum had the most.

When the researchers withheld glucose from the cells to lower their energy levels and rev up AMPK activity, they saw that each compartment responded to a different degree and within unique time frames. The greatest change in activity was in the cytoplasm, which saw more than a 40 percent increase in AMPK activity only half an hour after glucose withdrawal that was maintained for four hours. The mitochondria, on the other hand, saw a more modest increase that didn’t appear until four hours had passed.

Finally, the team modified the spies so that they could control their location in real time. These spies start off dispersed throughout the cell but then rapidly congregate at a specific compartment in response to a “chemical command” applied to the cells. (see VIDEO) Some of these molecules were simple spies like the others that would report on AMPK’s activities, but others were “saboteurs” because they could overwhelm AMPK and distract it from working on what it’s supposed to.

“We were able to halt AMPK’s activity in specific compartments — and nowhere else in the cell — on demand,” says Inoue. “And it happens so quickly, within seconds, that it doesn’t give the cell’s other signaling systems time to adapt, so the observations we make are entirely due to the absence of AMPK activity.”

He says the series of molecular tools can be used to further unravel the mystery of AMPK’s activities, and those of many other enzymes.

Other authors of the report include Takafumi Miyamoto, Elmer Rho, Vedangi Sample, Kirill Gorshkov, Melinda Chen and Jin Zhang of the Johns Hopkins University School of Medicine; Hiroki Akano, Masaki Magari and Hiroshi Tokumitsu of Okayama University in Japan; and Tasuku Ueno of the University of Tokyo.