Molecules Assemble in Water, Hint at Origins of Life 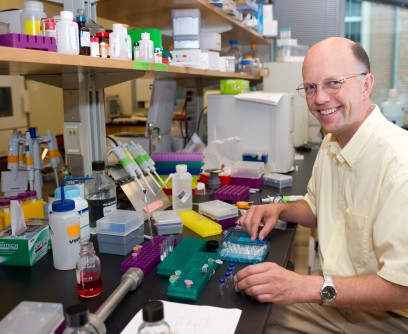 Georgia Tech Professor Nicholas Hud has been trying for years to find simple molecules that will assemble in water and be capable of forming RNA or its ancestor.

Newswise — The base pairs that hold together two pieces of RNA, the older cousin of DNA, are some of the most important molecular interactions in living cells. Many scientists believe that these base pairs were part of life from the very beginning and that RNA was one of the first polymers of life. But there is a problem. The RNA bases don’t form base pairs in water unless they are connected to a polymer backbone, a trait that has baffled origin-of-life scientists for decades. If the bases don’t pair before they are part of polymers, how would the bases have been selected out from the many molecules in the “prebiotic soup” so that RNA polymers could be formed?

Researchers at the Georgia Institute of Technology are exploring an alternate theory for the origin of RNA: they think the RNA bases may have evolved from a pair of molecules distinct from the bases we have today. This theory looks increasingly attractive, as the Georgia Tech group was able to achieve efficient, highly ordered self-assembly in water with small molecules that are similar to the bases of RNA. These “proto-RNA bases” spontaneously assemble into gene-length linear stacks, suggesting that the genes of life could have gotten started from these or similar molecules. The research is published online in the Journal of the American Chemical Society.

The discovery was made by a team of scientists led by Georgia Tech Professor Nicholas Hud, who has been trying for years to find simple molecules that will assemble in water and be capable of forming RNA or its ancestor. Hud’s group knew that they were on to something when they added a small chemical tail to a proto-RNA base and saw it spontaneously form linear assemblies with another proto-RNA base. In some cases, the results produced 18,000 nicely ordered, stacked molecules in one long structure.

“Thinking about the origin of RNA reminds me of the paradox of your grandfather’s ax,” said Hud, a professor in the School of Chemistry and Biochemistry. “If your father changed the handle and you changed the head, is it the same ax? We see RNA the same way. Its chemical structure might have changed over time, but it was in continual use so we can consider it to be the same molecule.”

Hud concedes that scientists may never be 100 percent sure what existed four billion years ago when a complex mixture of chemicals started to work together to start life. His next goal is to determine whether the proto-RNA bases can be linked by a backbone to form a polymer that could have functioned as a genetic material.

Georgia Tech partnered with the Institute for Research in Biomedicine in Barcelona, Spain on the project. The proto-RNA’s two-component, self-assembling system consisted of cyanuric acid (CA) and TAPAS, a derivative of triaminopyrimidine (TAP).

In addition to addressing the origin-of-life questions, Hud suggests the self-assembly process could be used in the future to create new materials, such as nanowires.

This project is supported by the National Science Foundation (NSF) and NASA (Award Number CHE-1004570), and by NASA Exobiology (Award Number NNX08A014G). The content is solely the responsibility of the principal investigators and does not necessarily represent the official views of the NSF or NASA.