Specific protein is highly sensitive to threatening changes in the cell’s environment and triggers a reversible, adaptive phase separation process 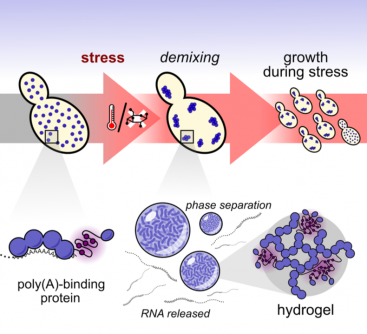 During phase separation, two mixed liquids separate, like oil and vinegar in a salad dressing. The new UChicago study showed that normal levels of the protein Pab1 could phase-separate and form hydrogel droplets.

Newswise — A specific protein inside cells senses threatening changes in its environment, such as heat or starvation, and triggers an adaptive response to help the cell continue to function and grow under stressful conditions, according to a new study by scientists from the University of Chicago.

When cells experience stress, such as heat or starvation, groups of proteins and RNA molecules inside the cells form clumps. These clumps have long been thought to be a sign of cellular damage, piles of melted, dysfunctional molecules that need to be discarded. This matches with observations that in many human neurological diseases, such as Alzheimer’s, Parkinson’s, and amyotrophic lateral sclerosis (ALS), clumps of proteins accumulate in dying nerve cells.

In the new study, published Mar. 9, 2017 in the journal Cell, D. Allan Drummond, PhD, and colleagues show that a molecule called poly(A)-binding protein (Pab1) forms clumps in response to stressful conditions inside budding yeast cells, and when only the protein is isolated in a test tube. What look like clumps are instead a hydrogel—like a jelly or toothpaste—which under the microscope appear as round droplets. Most importantly, when the researchers interfered with the formation of this stress-associated hydrogel in living cells, those cells couldn’t cope with stress. Hydrogel formation, in other words, is not damage, but an adaptive response.

“It appears to be an organized emergency procedure, like a fire alarm when people move away from their normal jobs and collect in large groups at specific places, unhurt and out of the way of danger,” said Drummond, who is an assistant professor in the Department of Biochemistry and Molecular Biology and of Human Genetics at UChicago. “When these molecules gather into large groups—forming a gel—they’re not just doing it for protection, but to do crucial work, like calling firefighters and paramedics.”

The study is the result of a five-year collaboration between Drummond and Tobin Sosnick, PhD, Chair of the Department of Biochemistry and Molecular Biology, and spearheaded by two graduate students, biophysicist Joshua Riback and biochemist Chris Katanski.

In recent years, a surge of research has focused on the formation of protein liquids and hydrogels as a way in which cells organize and remodel themselves. In one process, called “phase separation,” two mixed liquids separate, like oil and vinegar in a salad dressing. To get phase separation to occur, previous studies generally used extreme test-tube conditions (high concentrations of the protein or additives). The new UChicago study showed that normal levels of Pab1 could phase-separate—if confronted with temperature or pH changes that accompany cell stress.

Drummond and his colleagues are continuing to study how this phase separation process helps cells survive stress. In the paper, the researchers suggest this may be because when Pab1 releases specific messenger RNAs during stress response, this triggers translation of those mRNAs to encode new, stress-responsive proteins that help the cells grow.

The researchers are also studying how the hydrogel droplets of Pab1 get dispersed back into individual molecules. Understanding the reversal of phase separation could provide clues to how the process can go awry. In neurodegenerative disease like Alzheimer’s or ALS, for example, the presence of protein clumps in nerve cells may be a sign that the phase separation process began as a protective response to stress, but something went wrong and prevented the cells from returning to their normal state.

“This is the first example of those clumps being useful,” Drummond said. “These studies get at the broader questions of how cells use the reversible formation of massive groups of molecules to carry out important functions, and how these good clumping processes might go haywire, resulting in diseases where clumping has run amok.”

The study, “Stress­triggered phase separation is an adaptive, evolutionarily tuned response,” was supported by the Pew Charitable Trusts, the National Institutes of Health, the Protein Translation Research Network, the National Science Foundation, the U.S. Army Research Office, and the Department of Energy. Additional authors include Jamie Kear-Scott, Evgeny Pilipenko, and Alexandra Rojek, all from the University of Chicago.