Newswise — Opposing thumbs, expressive faces, complex social systems: it’s hard to miss the similarities between apes and humans. Now a new study with a troop of zoo baboons and lots of peanuts shows that a less obvious trait—the ability to understand numbers—also is shared by man and his primate cousins.

“The human capacity for complex symbolic math is clearly unique to our species,” says co-author Jessica Cantlon, assistant professor of brain and cognitive sciences at the University of Rochester. “But where did this numeric prowess come from? In this study we’ve shown that non-human primates also possess basic quantitative abilities. In fact, non-human primates can be as accurate at discriminating between different quantities as a human child.”

“This tells us that non-human primates have in common with humans a fundamental ability to make approximate quantity judgments,” says Cantlon. “Humans build on this talent by learning number words and developing a linguistic system of numbers, but in the absence of language and counting, complex math abilities do still exist.”

Cantlon, her research assistant Allison Barnard, postdoctoral fellow Kelly Hughes, and other colleagues at the University of Rochester and the Seneca Park Zoo in Rochester, N.Y., reported their findings online May 2 in the open-access journal Frontiers in Psychology.The study tracked eight olive baboons, ages 4 to 14, in 54 separate trials of guess-which-cup-has-the-most-treats. Researchers placed one to eight peanuts into each of two cups, varying the numbers in each container. The baboons received all the peanuts in the cup they chose, whether it was the cup with the most goodies or not. The baboons guessed the larger quantity roughly 75 percent of the time on easy pairs when the relative difference between the quantities was large, for example two versus seven. But when the ratios were more difficult to discriminate, say six versus seven, their accuracy fell to 55 percent.

That pattern, argue the authors, helps to resolve a standing question about how animals understand quantity. Scientists have speculated that animals may use two different systems for evaluating numbers: one based on keeping track of discrete objects—a skill known to be limited to about three items at a time—and a second approach based on comparing the approximate differences between counts.

The baboons’ choices, conclude the authors, clearly relied on this latter “more than” or “less than” cognitive approach, known as the analog system. The baboons were able to consistently discriminate pairs with numbers larger than three as long as the relative difference between the peanuts in each cup was large. Research has shown that children who have not yet learned to count also depend on such comparisons to discriminate between number groups, as do human adults when they are required to quickly estimate quantity. Studies with other animals, including birds, lemurs, chimpanzees, and even fish, have also revealed a similar ability to estimate relative quantity, but scientists have been wary of the findings because much of this research is limited to animals trained extensively in experimental procedures. The concern is that the results could reflect more about the experimenters than about the innate ability of the animals.

“We want to make sure we are not creating a ‘Clever Hans effect,’” cautions Cantlon, referring to the horse whose alleged aptitude for math was shown to rest instead on the ability to read the unintentional body language of his human trainer. To rule out such influence, the study relied on zoo baboons with no prior exposure to experimental procedures. Additionally, a control condition tested for human bias by using two experimenters—each blind to the contents of the other cup—and found that the choice patterns remained unchanged.

A final experiment tested two baboons over 130 more trials. The monkeys showed little improvement in their choice rate, indicating that learning did not play a significant role in understanding quantity. “What’s surprising is that without any prior training, these animals have the ability to solve numerical problems,” says Cantlon. The results indicate that baboons not only use comparisons to understand numbers, but that these abilities occur naturally and in the wild, the authors conclude.

Finding a functioning baboon troop for cognitive research was serendipitous, explains study co-author Jenna Bovee, the elephant handler at the Seneca Park Zoo who is also the primary keeper for the baboons. The African monkeys are hierarchical, with an alpha male at the top of the social ladder and lots of jockeying for status among the other members of the group. Many zoos have to separate baboons that don’t get along, leaving only a handful of zoos with functioning troops, Bovee explained.

Involvement in this study and ongoing research has been enriching for the 12-member troop, she said, noting that several baboons participate in research tasks about three days a week. “They enjoy it,” she says. “We never have to force them to participate. If they don’t want to do it that day, no big deal.

“It stimulates our animals in a new way that we hadn’t thought of before,” Bovee adds. “It kind of breaks up their routine during the day, gets them thinking. It gives them time by themselves to get the attention focused on them for once. And it reduces fighting among the troop. So it’s good for everybody.”

The zoo has actually adapted some of the research techniques, like a matching game with a touch-screen computer that dispenses treats, and taken it to the orangutans. “They’re using an iPad,” she says.

She also enjoys documenting the intelligence of her charges. “A lot of people don’t realize how smart these animals are. Baboons can show you that five is more than two. That’s as accurate as a typical three year old, so you have to give them that credit.”

Other University of Rochester co-authors on the study include Regina Gerhardt, an undergraduate student in brain and cognitive sciences, and Louis DiVincenti, a veterinarian and senior instructor in comparative medicine. This research was supported by the James S. McDonnell Foundation. 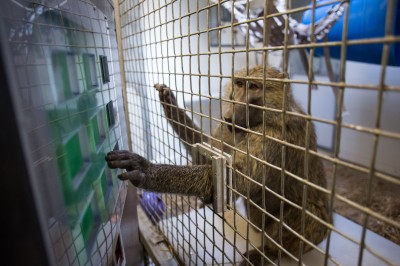 Caption: Sabina, an olive baboon at the Seneca Park Zoo in Rochester, N.Y. participates in a University of Rochester study led by cognitive scientist Jessica Cantlon. 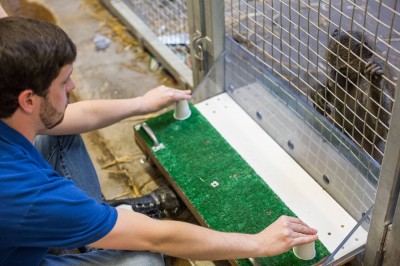 Caption: In this University of Rochester cognitive science study, research assistant Steve Ferrigno places treats into each of two cups, varying the numbers in each container. The baboons receive all the treats in the cup they choose, whether it is the cup with the most goodies or not. 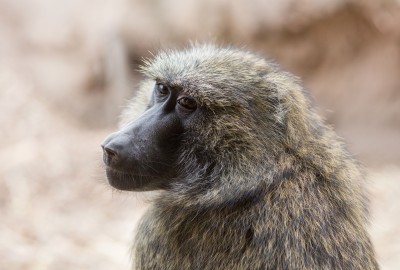 Caption: Pearl is one of the members of the Seneca Park Zoo baboon troop involved in University of Rochester research led by cognitive scientist Jessica Cantlon. 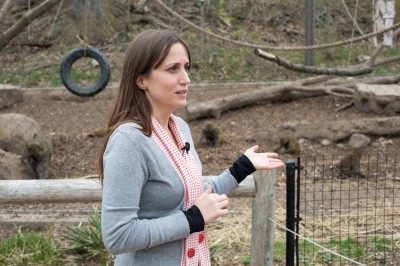 Caption: Jessica Cantlon, assistant professor of brain and cognitive sciences at the University of Rochester, outside the olive baboon enclosure at the Seneca Park Zoo in Rochester, N.Y. Her new study shows that non-human primates can be as accurate at discriminating between different quantities as a human child