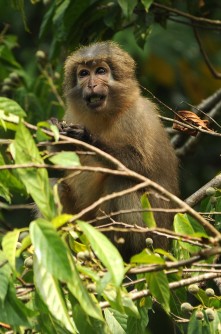 The third most vulnerable is the 'endangered' Sanje mangabey, threatened by direct hunting and habitat destruction, especially in unmanaged forests

Newswise — NEW YORK (July 17, 2013) — A five-year study by the Wildlife Conservation Society gives new hope to some of the world’s most endangered primates by establishing a roadmap to protect all 27 species in Tanzania – the most primate-diverse country in mainland Africa.

The study combines Tanzania’s first-ever inventory of all primate species and their habitats with IUCN Red List criteria and other factors such as threats and rarity, ranking all 27 species from most vulnerable to least vulnerable. The authors then identify a network of “Priority Primate Areas” for conservation.

The paper appears in the July 17 issue of the journal Oryx. Authors are Tim Davenport of the Wildlife Conservation Society, Katarzyna Nowak of the Udzungwa Elephant Project, and Andrew Perkin of the Tanzania Forest Conservation Group.

A third of Tanzania’s primate species are found nowhere else on earth. The study found that the most vulnerable was the kipunji, first discovered by WCS in 2003 on Mt Rungwe and described by WCS as an entirely new genus in 2006. Another extremely vulnerable species is the Zanzibar red colobus, a species whose population is currently being counted by WCS. More common species include the baboons, black and white colobus monkeys and vervets.

The authors say that the Priority Primate Areas could be applied in other nations rich in wildlife but facing burgeoning pressures from population growth. This could be similar to “Important Bird Areas” a global effort to identify and conserve places that are vital to birds and other biodiversity. In fact, Tanzania’s Priority Primate Areas were also often rich in bird life underscoring their value to conservation in general.

“We believe Priority Primate Areas can be a valuable conservation tool worldwide, similar to the successful Important Bird Area concept,” said the study’s lead author, Tim Davenport of WCS. “For a developing nation of such global conservation importance like Tanzania, priority setting is an essential tool in managing wildlife.”

Tanzania is widely regarded as the most important country in mainland Africa for biological diversity and unique species, and contains the continent’s highest mountain, deepest lakes and large parts of two globally significant biodiversity hotspots, the Eastern Afromontane and the Albertine Rift.

However, Tanzania has the second highest rate of forest loss in sub-Saharan Africa, despite considerable conservation investment and a large amount of land nominally under protection.

“This study has global implications as many nations grapple with reconciling their development needs with biological conservation and the needs of wildlife,” said James Deutsch, WCS Executive Director for Africa Programs. “Science-based priority setting tools like this one are the best chance for developing nations to minimize biodiversity loss.”