30-Aug-2016 12:15 PM EDT, by University of Minnesota College of Science and Engineering
favorite_border 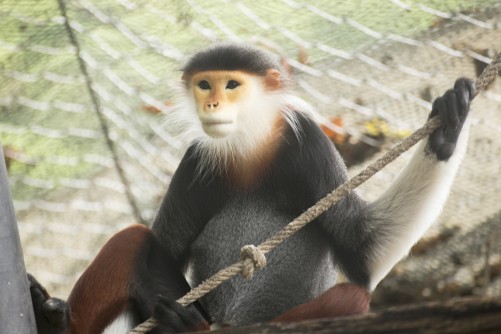 To better understand how changes in diet, lifestyle, and exposure to modern medicine affect primates’ guts, a team of researchers used DNA sequencing to study the gut microbes of multiple non-human primates species, including the highly endangered red-shanked douc.

Newswise — MINNEAPOLIS/ST. PAUL (08/30/16) — A new study led by the University of Minnesota shows that monkeys in captivity lose much of their native gut bacteria diversity and their gut bacteria ends up resembling those of humans. The results suggest that switching to a low-fiber, Western diet may have the power to deplete most normal primate gut microbes in favor of a less diverse set of bacteria.

The study was published in the most recent issue of the Proceedings of the National Academy of Sciences (PNAS), a leading scientific journal.

The microbiome (or gut bacteria) has been tied to a wide variety of medical conditions from autism to obesity. The lack of fiber in modern Western diets is often thought to cause harmful perturbations to the human gut microbiome. However, the causes and consequences of how the gut bacteria of humans changes as societies become modernized and westernized is still a mystery because there are too many variables when studying humans.

To better understand how changes in diet, lifestyle, and exposure to modern medicine affect primates’ guts, a team of researchers led by University of Minnesota computer science and engineering professor Dan Knights, veterinary medicine professor Tim Johnson, and veterinary medicine Ph.D. student Jonathan Clayton, used DNA sequencing to study the gut microbes of multiple non-human primates species in the wild and in captivity as a model for studying the effects of emigration and lifestyle changes.

The researchers studied two different species: the highly endangered red-shanked douc and the mantled howler monkey. The authors then compared the captive primate microbiomes to the microbiomes of their wild counterparts and to those of modern humans living in developing nations and in the United States.

What they found could be considered alarming. Not only did captive monkeys lose most of their natural wild gut bacteria, but they very consistently all acquired the same new and less diverse set of bacteria—the same bacteria living in our own modern human guts. Across several different zoos on three different continents, all captive primate microbiomes showed the same pattern of converging toward the modern human microbiome.

“We don't know for certain that these new modern human microbes are bad, but on the other hand many studies are now showing that we evolved together with our resident microbes,” said Knights. “If that is the case, then it is likely not beneficial to swap them out for a totally different set.”

In the wild, each primate species had its own signature fingerprint of microbes. Yet in captivity, they all lost their distinctive microbes and ended up being dominated by the same bacteria that dominate our human guts—species of Bacteroides and Prevotella.

This, along with other analyses to rule out confounding factors like genetics, geography and antibiotic usage, suggested a simple explanation for why the captive primate guts looked more like human guts on the inside—they weren't eating enough plants.

To test whether a partial loss of plant-derived dietary fiber would result in a partial loss of native gut microbes, the authors also collected fecal samples from a semi-captive population of red-shanked doucs who lived in a sanctuary and received about half of the normal variety of plants eaten by wild doucs. Interestingly, these semi-captive animals’ microbiomes fell right in between those of the wild and captive doucs, further supporting they hypothesis that lower plant consumption causes loss of microbial diversity.

“We think this study underscores the link between fiber-rich diets and gut microbiome diversity,” Knights said.

This research was funded primarily by a variety of grants from the Morris Animal Foundation, University of Minnesota, Margot Marsh Biodiversity Foundation, Mohamed bin Zayed Species Conservation Fund, and a PharmacoNeuroImmunology Fellowship through the National Institutes of Health.