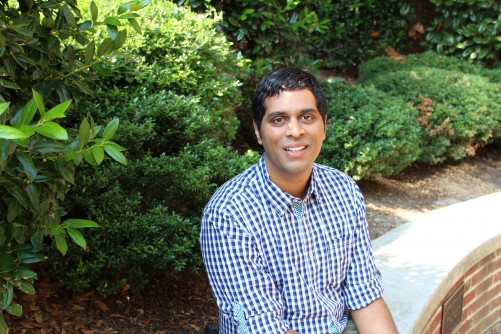 Satish Gopal, MD, MPH, is a member of the UNC Lineberger Comprehensive Cancer Center and an assistant professor in the UNC School of Medicine and UNC Gillings School of Global Public Health.

Newswise — CHAPEL HILL – Looking to tap into the promise of the National Cancer Moonshot initiative to accelerate cancer research in the United States and improve cancer detection and treatment in the process, a University of North Carolina Lineberger Comprehensive Cancer Center clinician-scientist said there is an equally critical need to address disparities in cancer treatment around the globe.

Satish Gopal, MD, MPH, in a perspective published in the April 28 issue of the New England Journal of Medicine, called for a commitment to contribute resources and energy to control cancer in less-resourced countries where there are significant gaps in cancer awareness, prevention, diagnosis, and treatment.

“With the ‘Cancer Moonshot,’ there’s a huge amount of enthusiasm and serious commitment to take the fight against cancer even further,” said Gopal a member of UNC Lineberger and an assistant professor in the UNC School of Medicine and UNC Gillings School of Global Public Health. “What I see is very little of the energy, funding, enthusiasm, and outrage getting channeled to parts of the world where there’s a huge amount of unaddressed need. The science community needs to help address this issue.”

Gopal is the only board-certified medical oncologist practicing in Malawi, a southern African country of about17 million people. He also is the cancer program director for UNC Project-Malawi, a research and care collaboration between UNC-Chapel Hill and the Malawi Ministry of Health.

Few, if any, of the significant advances made in cancer care during the past several decades have reached Malawi, said Gopal, who has lived and worked in the country with his family since 2012. Even basic services are sometimes lacking. There are no radiation oncology services anywhere in Malawi and generic chemotherapy medicines that were licensed 40 to 50 years ago are sometimes not available.

Further illustrating disparities in care and prevention, the vaccine against human papillomavirus, a virus linked to cervical, oropharyngeal and other cancers, is not available to girls and women in Malawi, despite overwhelming disease burden. And surveys have shown extremely low awareness about breast cancer among women in Malawi, which contributes to late diagnosis and reduced opportunities for cure, and highlights an urgent need for greater awareness.

“The pace of cancer advances has been quite rapid over the past decade. We treat and diagnose many cancers totally differently from when I entered my oncology fellowship six years ago,” Gopal said. “And I think now with the Moonshot, we have a remarkable opportunity to accelerate that even further. This is going to change cancer domestically. What I’m trying to highlight is we could also have the opportunity to change cancer worldwide, and that is not being done.”

Gopal said while organizations, including the National Cancer Institute, are making greater investments in global cancer programs, the response needs to extend beyond research grants and papers. At UNC Project-Malawi, he said researchers and physicians are both working on groundbreaking science, and also using proven strategies to more effectively treat, prevent, and diagnose cancer in a low-resource country. Broadly, he believes the cancer initiative needs to mirror the global response to human immunodeficiency virus, or HIV, which included tremendous social activism and political will even outside the research community.

“What happened in the HIV world is that the research community in some ways led the way, and was a catalyst,” Gopal explained. “But they were also able to catalyze a movement that was bigger than universities and science, and that’s what was ultimately required to complete change the face of that disease worldwide.”