For women with intermediate risk recurrence score from 21-gene expression assay, less may be more 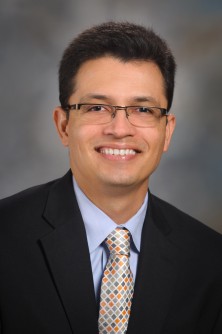 Newswise — HOUSTON ― Women with early-stage breast cancer who had an intermediate risk recurrence score (RS) from a 21-gene expression assay had similar outcomes, regardless of whether they received chemotherapy, a new study from The University of Texas MD Anderson Cancer finds.

The encouraging research, published in the journal CANCER, still needs to be validated in an ongoing international trial. If verified, women with intermediate scores may one day be able to avoid chemotherapy as standard of care.

Historically, the management of women with early-stage breast cancer has been aggressive, explained Carlos H. Barcenas, M.D., assistant professor, Breast Medical Oncology, with many Stage I and all Stage II patients receiving chemotherapy. Fortunately, over the last decade, research discoveries across the breast cancer landscape have evolved such that less is now more, for women with early-stage disease, said Barcenas. “Through years of research discoveries, it became clear that we were over-treating many women with breast cancer, especially those with early-stage disease. In addition to chemotherapy’s obvious side effects, there were also long-term complications for these women as survivors,” said Barcenas, the study’s corresponding author.

One such practice-changing clinical discovery was that a 21-gene-expression assay could predict the risk of recurrence among some with early-stage breast cancer. In 2015, initial results from the international clinical trial, TAILORx, found that women with hormone receptor positive, HER2 and lymph node negative early stage disease with a low RS of 0-10 could have chemotherapy omitted altogether.

While the findings dramatically changed care for women with a low RS, many questions remain regarding the management of women with an intermediate RS, defined by this trial as a score of 11-25. The conversation to give or not give chemotherapy is one Barcenas often has in his clinic, he said. “This study evolved out of my patients’ frustration that I could not provide a definitive answer to their paramount question: ‘Do I need chemotherapy?’ As we wait for the TAILORx findings, we decided to look at MD Anderson’s own experience to glean insight on how best to care for these women with an intermediate risk recurrence score,” said Barcenas. For the retrospective, single-institution analysis, Barcenas and his MD Anderson colleagues identified 1,424 Stage I and II breast cancer patients treated at the institution between 2005 and 2011. All underwent the 21-gene expression assay. In addition, the women were hormone receptor positive, HER2 and lymph node negative. None of the MD Anderson patients identified participated in the TAILORx trial. Barcenas and his colleagues used the same RS cutoff scores as the TAILORx trial. Of the MD Anderson patients, the RS distribution was: 297 (21 percent) scored 0 – 10; 894 (63 percent) scored 11-25; and 233 (16 percent) scored greater than 25. Of those groups, 1.7, 15 and 73.4 percent received chemotherapy, respectively. With a median follow-up of 58 months, those with a RS of 11-25 had an invasive disease-free survival (IDFS) rate at five years of 92.6 percent, regardless of whether patients received chemotherapy or not. Among those patients who did not receive chemotherapy, the estimated rates of IDFS and overall survival was 93 percent and 98 percent, respectively, which was comparable to those who did receive chemotherapy. The study has a number of limitations, said Barcenas. Due to a relatively short follow-up and the few number of outcome events, the researchers feel that the benefit of chemotherapy cannot be ruled out yet in this group of patients. While not practice changing, the findings do give Barcenas more information when discussing the benefits of chemotherapy in early-stage breast cancer patients, should their RS score be 11-25. “Our research is likely the most comprehensive data we will have about this patient population until the international randomized trial is published,” said Barcenas. “Hopefully our findings will serve as a discussion point between physicians and patients as they are making critical decisions regarding a woman’s breast cancer care.” The study was funded by The MD Anderson Cancer Center Support Grant from the National Cancer Institute (grant CA016672), which supports the Biostatistics Shared Resource.