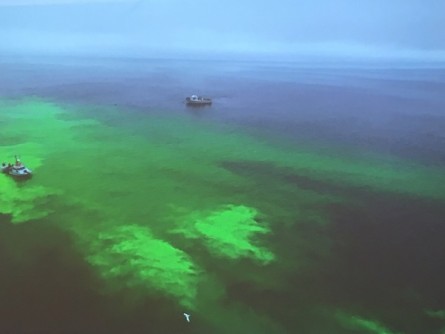 Researchers simulated an oil spill by releasing a neon green biodegradable dye from a vessel of the Monterey Bay Aquarium Research Institute (left), while representatives from the Coast Guard, ADAC, WHOI, S&T and other organizations watched from another boat on the right. 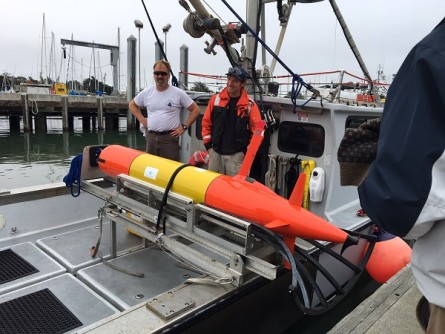 Onboard the research vessel, the 3-D oil scanning robot LRAUV is ready to test its new configuration. 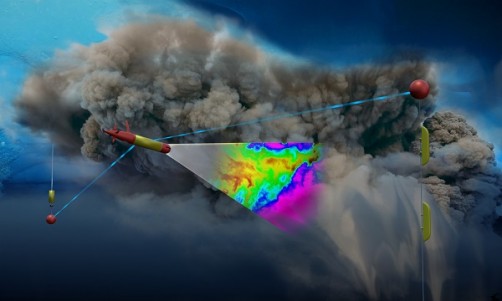 An artist’s depiction of LRAUV under sea ice. Using photo-chemical sensors, the robot scans the density of a billowing cloud of oil coming from an ocean floor well. The red and yellow objects are parts of a communication system consisting of antennas suspended under ice from a buoy installed on top of the ice.

Newswise — Environmental changes and economic incentives are transforming maritime activity in the Arctic region.  As ice recedes and maritime activity increases, the Department of Homeland Security (DHS) is preparing for potential incidents involving oil and hazardous materials in U.S. Arctic waters through the U.S. Coast Guard. As the lead agency to plan for and respond to environmental threats under the National Oil and Hazardous Substances Pollution Contingency, the Service is addressing major challenges in spill response. Its focus is ensuring access to early and on-going information about the nature and magnitude of spills to help with effective cleanup.

“Because of ice coverage and the tyranny of distance, it is difficult to get resources and assets up in the Arctic in a quick manner,” said Kirsten Trego, Executive Director of the Coast Guard’s Interagency Coordinating Committee on Oil Pollution Research. “With better real-time data, more effective response strategies can be developed and deployed.”

To help the Coast Guard map oil spills under ice, the DHS Science and Technology Directorate (S&T) has been working on an underwater robot for the past four years through a DHS Center of Excellence, the Arctic Domain Awareness Center (ADAC) at the University of Alaska Anchorage,  in partnership with the Woods Hole Oceanographic Institution (WHOI) and Monterey Bay Aquarium Research Institute.

The result of this research is the Tethys Long Range Autonomic Underwater Vehicle or LRAUV, a helicopter-portable, torpedo-shaped system with oil sensors and navigation capabilities. This robot can provide real-time data for first responders by producing and transmitting 3-D maps of crude oil, diesel, gasoline and kerosene spills. ADAC recently tested this technology in California and plans to do more tests this year and next, including under-ice tests.

The work on LRAUV started in January 2015, the idea born from the stress around the Deep Water Horizon spill in the Gulf of Mexico in 2010, which was measured with “limited sensors and short duration platforms” according to Gemelas.

By comparison, the LRAUV can rove for an impressive 15 days and travel for 373 miles without recharging batteries, and the latest prototype can travel 2-4 feet per second (1-3 miles per hour). It measures 8 feet long, 12 inches wide, and weighs 240 pounds. Working in tandem with buoys installed on the ice, the LRAUV can provide invaluable data about a spill.

“This vehicle is the first of its kind. We haven’t previously been able to characterize oil spills with an underwater vehicle under solid ice pack,” said ADAC Executive Director retired Major General Randy “Church” Kee.

Most importantly, this technology opens up possibilities for Coast Guard response capabilities. For example, if there was a large oil spill in the Russian Chukchi Sea, where Russia and Alaska meet, and the spill drifted into U.S. waters, Coast Guard responders could quickly mobilize a team to deploy the LRAUV. After deployment, they could monitor the data transmission from the robot back at their command center. The robot would scan for oil below and around the ice, and transmit via the specially installed buoys.

Since there is no cellular coverage in the vast Arctic, the buoys – equipped with Very High Frequency antennas to transmit data via satellites – are a key component to the LRAUV’s success. When deployed, the buoys will provide solar or wave power to recharge the robot’s batteries, an effective way to keep it charged in such remote conditions.

Putting LRAUV to the Test

On September 27, 2018, ADAC conducted an open-water test of its LRAUV prototype in Monterey Bay, California, with the goal to characterize an oil spill and transmit data back to shore.

“The researchers showed us how LRAUV works; this was the first test with the oil sensors and data transmission in action,” said Trego.

The researchers equipped the underwater robot with chemical sensors and simulated an oil spill from a vessel by “leaking” a non-toxic, neon green sea dye into the water. The dye, just like oil, can float in the top 13 feet of the water column, but biodegrades in sunlight in a matter of hours.

“This specific water test was intended to check all the prior work in the newly fabricated vehicle to characterize an oil spill,” said Kee.

The robot surfaced every few minutes to transmit and receive data from the control vessel and check its location using cellular connection. After several hours, LRAUV had scanned successfully the whole area and transmitted the data to shore for analysis.

LRAUV is currently being prepared for transport to WHOI in Woods Hole, Massachusetts, where the next test will take place. The researchers will process the navigation performance data from the test and will tune the navigation algorithms according to the results. Then the team will make three communication buoys and will test them with the robot under ice. The team is targeting to conduct the under-ice test in a large lake in New Hampshire, the Eastern Great Lakes, or Alaska during the winter season.

ADAC plans to complete all rigorous testing – including under-ice tests – and the construction of communication relay buoys by the end of June 2019.

“The demonstration in September highlighted the unique capabilities of LRAUV, which will be a welcome addition to the suite of tools used to deal with oil spills,” Trego said.  “We look forward to the further development of LRAUV’s capabilities, additional testing in real world conditions, and transitioning it into operational use.” 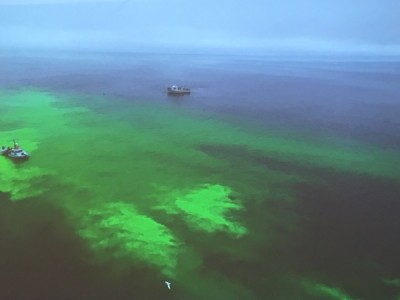 Caption: Researchers simulated an oil spill by releasing a neon green biodegradable dye from a vessel of the Monterey Bay Aquarium Research Institute (left), while representatives from the Coast Guard, ADAC, WHOI, S&T and other organizations watched from another boat on the right. 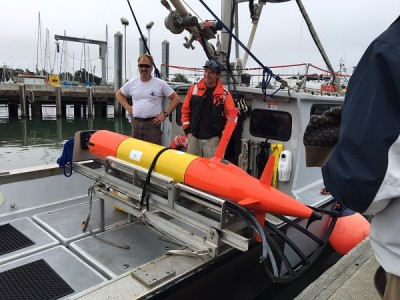 Caption: Onboard the research vessel, the 3-D oil scanning robot LRAUV is ready to test its new configuration. 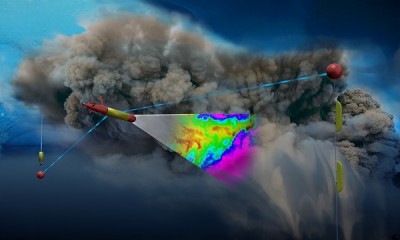 Caption: An artist’s depiction of LRAUV under sea ice. Using photo-chemical sensors, the robot scans the density of a billowing cloud of oil coming from an ocean floor well. The red and yellow objects are parts of a communication system consisting of antennas suspended under ice from a buoy installed on top of the ice.