In this visualization of the female mosquito brain, individual areas appear one at a time. Researchers will be able to superimpose different mosquito behaviors onto this neural atlas at mosquitobrains.org. 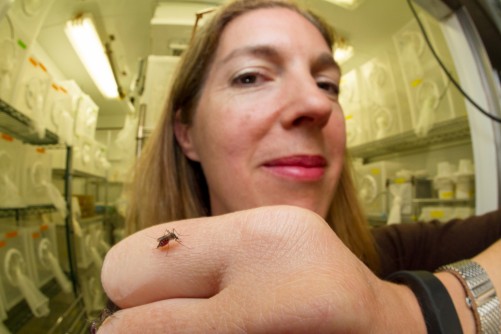 HHMI Investigator Leslie Vosshall lets a mosquito feed on her in the mosquito room at The Rockefeller University. 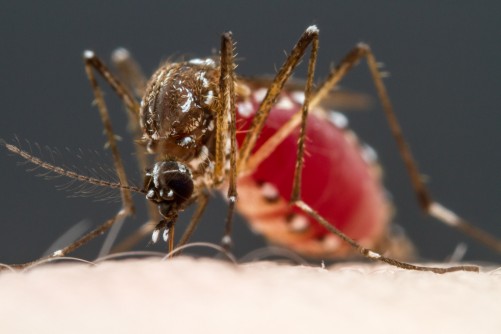 Female Aedes aegypti mosquitoes (one shown) feed on blood. Mapping groups of neurons within the brain could help researchers understand the circuitry behind feeding and other behaviors. 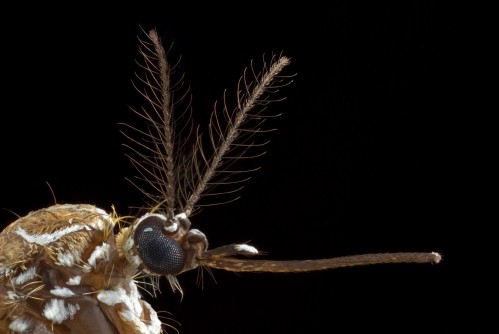 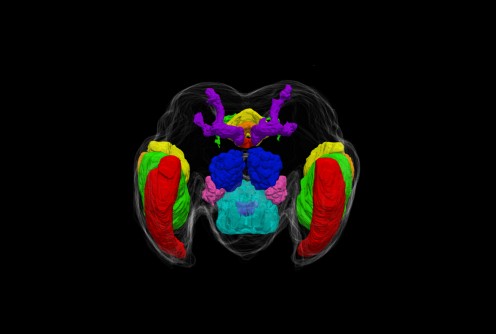 In this visualization of the female mosquito brain, different regions appear in different colors.

Newswise — A mosquito’s head is about the size of a pencil tip, but it packs a dangerous punch: it is the delivery system for malaria, yellow fever, and Zika, among other blood-borne diseases. In most mosquito species, females are the more dangerous sex. They’re the ones drinking – and transferring – blood.

Now, for the first time, researchers have built an atlas of the female mosquito’s brain. The resource, freely available at mosquitobrains.org, lays out a brain map that may ultimately help reveal the circuitry that motivates female mosquitoes to bite.

“We are trying to build the field of mosquito neurobiology,” says Howard Hughes Medical Institute (HHMI) Investigator Leslie Vosshall, who led the work. She hopes that the new atlas will let mosquito researchers from all over the world share data and better understand which parts of the mosquito brain drive different behaviors.

“Somewhere in that female brain is the drive to sense humans, fly toward humans, land on humans, and bite and drink the blood of humans,” says Vosshall, a neurobiologist at The Rockefeller University. “Somewhere in that brain is where decision making, motivation, and hunger reside.”

While male mosquitoes are strictly vegetarian, females bite and feed on humans and other animals to provide nutrients for developing eggs. But no one knows what parts of the brain drive this biting behavior ­– or any behavior, Vosshall says. To help answer this question, researchers first need a map that lays out how mosquitoes’ roughly 100,000 neurons wire together. So about a year ago, Vosshall and colleagues set out to make one: they began painstakingly staining and photographing brains from dozens of female Aedes aegypti mosquitoes.

Meg Younger, a postdoctoral fellow in Vosshall’s lab who spearheaded the project, stitched each picture together, averaging out the subtle idiosyncrasies of individual brains to generate a representative atlas. The atlas describes the location of groups of neurons within the brain – like giving them a home address. In the past, researchers had a vague idea of where certain neurons resided, Vosshall says, “but now they can map it pretty exactly using this website.”

With the resource available online, scientists can superimpose their data onto the reference brain and see how the neurons they’re studying relate to those being studied by other groups. “People can see immediately at a glance how these different sets of neurons relate to each other,” Vosshall says.

Researchers can also layer the functions of individual neurons onto the reference brain, helping map out the circuitry of different behaviors, such as how mosquitoes sense odors. Understanding why mosquitoes choose to bite certain people may eventually help researchers develop new tools to reduce the spread of mosquito-borne diseases.

Next, Younger says, the team wants to develop a reference brain for the male mosquito. Because females bite and males don’t, understanding how the brains of the two sexes differ could provide even more insights into behavior.

The development of a brain atlas in other insect species has proved invaluable for understanding which neurons are involved in different behaviors. In fruit flies, for example, researchers at HHMI’s Janelia Research Campus have identified neurons in the fruit fly brain that are linked to walking, wing grooming, and even aggression.

“We hope that mosquitobrains.org will be the engine that allows mosquito biologists to understand the neural basis of mosquito behavior,” Younger says. She thinks the tool could be a new driver for collaboration.