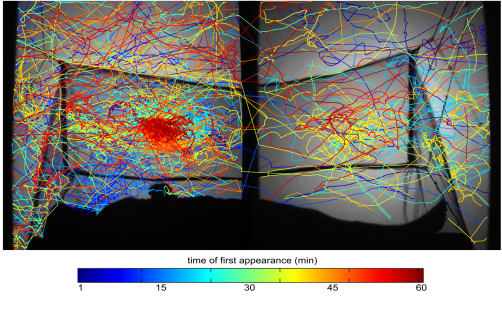 This image was captured by an infra-red tracking system and shows the flight paths of multiple mosquitoes as they attempt to reach a sleeping human protected inside an insecticide-treated be net. The image shows the high concentration of activity on the roof of the net, above the torso of the sleeper beneath. 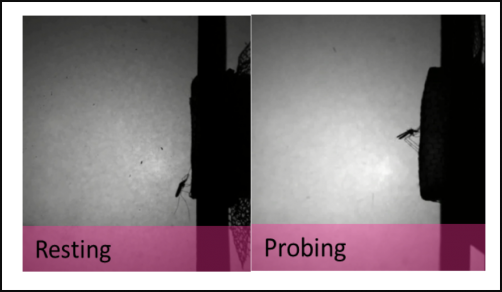 Newswise — LSTM’s Department of Vector Biology has received a major grant from the Bill & Melinda Gates Foundation for a research programme to develop novel test protocols to accelerate development and bring to market, the next generation of vector control products.

Faced with the rapidly developing problem of insecticide resistance among the mosquito populations responsible for the spread of malaria throughout Africa, the need for new insecticides and other vector control tools is critical. At present, the assays used to evaluate new products, and to assess the impact of insecticide resistance on their performance, are limited to basic laboratory tests. It is now known that these are poorly linked to the ultimate activity of the product or its effect on mosquitoes in the field.

Led by Professors Philip McCall and Hilary Ranson at LSTM, and working in close collaboration with Professor David Towers’ group at the University of Warwick’s School of Engineering, the team aim to develop far a more robust and biologically relevant approach that will define accurately how a product is likely to function operationally. Entitled Accelerating time to market of new vector control tools by strengthening the Phase I evaluation, this US$2m Gates Foundation grant will support the application of video-tracking methods to quantify precisely the effects on mosquito behaviour of any chemical or device, allowing exceptional insight into its mode of action. The effects on mosquitoes will be evaluated beyond the current practice of measuring only the immediate killing effects, by exploring a range of potential additional delayed or sub-lethal effects that could eventually impact on malaria transmission.

The project is founded on technological advances the LSTM-Warwick team developed during their previous collaboration on the EU-funded Avecnet consortium, and closely allied to ongoing research funded by MRC and new collaboration MIRA, funded by the Wellcome Trust.

Professor McCall said: “The team aim to develop experimental procedures to record the impact of exposure to an active ingredient or formulated product over the lifetime of the mosquito. At the end of the three-year project, tests will be assembled into a defined pipeline for optimImage one-ising impact assessment of potential new vector control products under laboratory controlled conditions and we will produce an updated manual for the laboratory analysis of vector control products for consideration by WHO”. Professor Towers added: “We hope the use of video-tracking and associated data analytics combined with the significant expertise at LSTM will lead to better understanding of vector control approaches and hence significantly improved products to combat the spread of malaria throughout Africa.“

Image captionsImage one This image was captured by an infra-red tracking system and shows the flight paths of multiple mosquitoes as they attempt to reach a sleeping human protected inside an insecticide-treated be net. The image shows the high concentration of activity on the roof of the net, above the torso of the sleeper beneath.

image two The team also developed camera systems that allow observation and quantification of detailed aspects of a mosquito’s behaviour; here the mosquito’s behaviour is recorded as it starts to feed on a human through an insecticide-treated bednet.