4 in 5 people say adults shouldn’t be allowed to use medical marijuana in front of children; support of patient use much lower for kids than adults 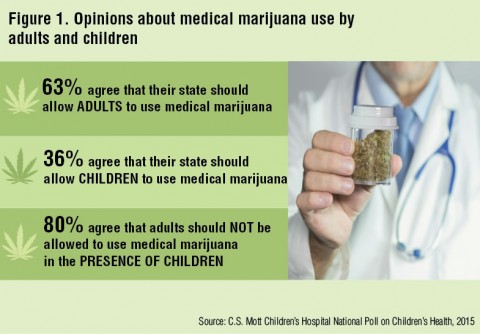 University of Michigan C.S. Mott Children’s Hospital National Poll on Children’s Health first to measure the public’s views about the use of medical marijuana for children compared to adults.

(Broadcast-quality graphic and video available with this story)

While nearly two-thirds of people agree that their state should allow medical marijuana for adults, half as many – just over a third – say it should be allowed for children, according to today’s University of Michigan C.S. Mott Children’s Hospital National Poll on Children’s Health that included a national sample of adults in the U.S.

“We found that while most people support state laws that permit medical marijuana use among adults, the story is dramatically different for children. Medical marijuana is a controversial subject when we’re talking about kids,” says Matthew M. Davis, M.D., M.A.P.P., director of the National Poll on Children’s Health and professor of pediatrics and internal medicine in the Child Health Evaluation and Research Unit at the U-M Medical School.

“Our findings suggest that not only is the public concerned about the use of medical marijuana among children, but that the majority of Americans worry that even exposure to it may be harmful to kids’ health. As is typical with anything involving health, the public’s standards are much higher when it comes to protecting children’s health.”

News stories around the country have highlighted the complexity of medical marijuana laws, with cases of children even being taken away from parents using medical marijuana at home. In Maine for example, even though medical marijuana is legal, the state’s Supreme Judicial Court ruled that it can make a person unfit as a parent and therefore risk custody rights.

As more states allow use of medical marijuana, lawmakers, doctors and families also face questions about whether children with qualifying conditions should be able to use it too. In Connecticut, lawmakers are considering a bill that would expand the state’s medical marijuana program to children. In New Jersey, the health department recently took a step toward allowing edible medical marijuana for kids. States like Colorado permit a special strain of cannabis known as "Charlotte's Web" used by hundreds of children.

However, there is little science about the safety or efficacy of treating children with medical marijuana. Research also indicates that the brains and nervous systems of children and adolescents are especially vulnerable to adverse effects of marijuana use, a concern raised by the American Academy of Pediatrics and American Academy of Child and Adolescent Psychiatry.

The new Mott poll comes on the heels of new bills in Congress asking the federal government to reclassify marijuana as a controlled substance that can be dispensed legally. This would allow for broader federal funding of medical research about medical marijuana.

Advocates for medical marijuana argue that it can be safe and effective for treating symptoms related to diseases such as cancer, glaucoma, HIV/AIDS and epilepsy for adults and children. Those opposed are concerned about inadequate scientific testing as a treatment, negative side effects on the brain and other organs and evidence that drug use early in life is more likely to lead to drug addiction in adulthood.

Purpose/Funding: The C.S. Mott Children’s Hospital National Poll on Children’s Health – based at the Child Health Evaluation and Research Unit at the University of Michigan and funded by the University of Michigan Health System – is designed to measure major health care issues and trends for U.S. children. Data Source: This report presents findings from a nationally representative household survey conducted exclusively by GfK Custom Research, LLC (GfK) for C.S. Mott Children’s Hospital via a method used in many published studies. The survey was administered in November/December 2014 to a randomly selected, stratified group of adults (n=2,176), from GfK’s web-enabled KnowledgePanel®, that closely resembles the U.S. population. The sample was subsequently weighted to reflect population figures from the Census Bureau. The survey completion rate was 54 percent among panel members contacted to participate. The margin of error is ±2 to 3 percentage points.