Improving our understanding of the most-distant known astrophysical object 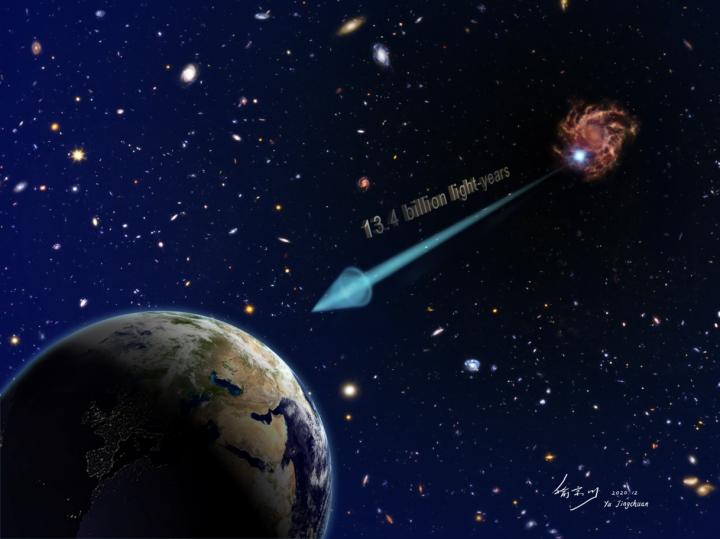 An artist's conception of the most-distant known astrophysical object--GN-z11, a galaxy 13.4 billion light-years from Earth--depicted with a gamma-ray burst like the one caught by the astronomers that allowed them to understand this phenomenon in the early universe.

Formed 400 million years after the Big Bang, GN-z11 was previously determined by space telescope data to be the most-distant object yet discovered. In two newly published Nature Astronomy papers, a team led by Linhua Jiang at the Kavli Institute for Astronomy and Astrophysics at Peking University took near-infrared spectra using ground-based telescopes that confirmed the galaxy's distance. They also caught an ultraviolet flash associated with a gamma-ray burst from the galaxy.

Their findings will improve our understanding the formation of stars and galaxies in the very early universe.

The Big Bang started the universe as a hot, murky soup of extremely energetic particles that was rapidly expanding. After about 400,000 years, these particles cooled and coalesced into neutral hydrogen gas initiating a cosmic dark age.

Some patches of gas were denser than others and, eventually, their material collapsed inward, forming the first clumps of structure in the cosmos. The energy released by these ancient stars and galaxies caused the neutral hydrogen strewn throughout the universe to get excited and lose an electron--a process called ionization. Because photons could travel freely through this ionized gas, the universe became luminous again.

This period of cosmic reionization lasted several hundred million years and represents one of the most important phase transitions of the history of the universe. One of the primary scientific goals of the next generation telescopes, including the Giant Magellan Telescope under construction at Carnegie's Las Campanas Observatory, is to understand this epoch and to detect light from these first objects. However, it is very difficult for existing telescopes to detect spectra from such distant galaxies, which is what makes this discovery so exciting.

By taking deep spectroscopic observations of GN-z11 using the Keck I telescope on Mauna Kea in Hawaii, the team was able to confirm its distance of 13.4 billion light-years. However, analysis of the light coming from GN-z11 indicated an abundance of elements heavier than hydrogen and helium in the galaxy's composition. This indicates that it is not one of the original galaxies, which were formed in a cold, pristine universe and lacked the cornucopia of elements synthesized by previous generations of stars and seeded into the surrounding raw material when they exploded as supernovae.

The Keck observations also revealed a bright burst of light that lasted less than three minutes. Detailed analysis of this flash was produced by a gamma-ray burst in GN-z11. It was not previously known that these phenomena existed only a few hundred million years after the Big Bang.

"The more we learn about the universe's earliest objects, the better we can understand how the structure of our cosmos was shaped," Walth said.

This work was supported by the National Science Foundation of China, the National Key R&D Program of China, and the CAS South America Center for Astronomy.

The Carnegie Institution for Science (carnegiescience.edu) is a private, nonprofit organization headquartered in Washington, D.C., with three research divisions on both coasts. Since its founding in 1902, the Carnegie Institution has been a pioneering force in basic scientific research. Carnegie scientists are leaders in plant biology, developmental biology, astronomy, materials science, global ecology, and Earth and planetary science.