The rate that fish are captured by predators can double when boats are motoring nearby, according to pioneering work led by a University of Exeter marine biologist. 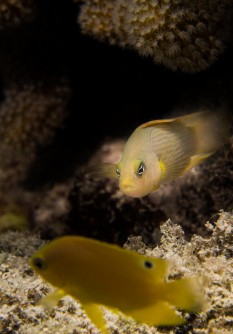 This image shows the predatory dusky dottyback eyeing up a juvenile Ambon damselfish. 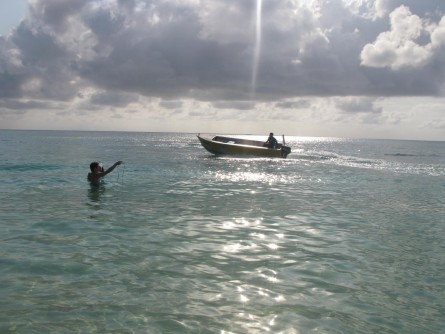 This is the the research team recording motorboat noise at the experimental site. Boat driver: Mark Meekan; Recording: Steve Simpson

Newswise — The rate that fish are captured by predators can double when boats are motoring nearby, according to pioneering work led by a University of Exeter marine biologist.

Dr Stephen Simpson and his international research team found that noise from passing motorboats increases stress levels in young coral reef fish and reduces their ability to flee from predators. As a consequence they are captured more easily and their survival chances are halved.

This is the first study to show that real-world noise, in this case the common noise of motorboats, can have a direct consequence on fish survival. The team hope the findings will inspire better environmental noise management in coastal areas.

"We found that when real boats were motoring near to young damselfish in open water, they became stressed and were six times less likely to startle to simulated predator attacks compared to fish tested without boats nearby," said Dr Simpson, a senior lecturer in the University's Biosciences department, whose work is funded by the Natural Environment Research Council (NERC) and the ARC Centre of Excellence for Coral Reef Studies.

"The combination of stress and poor responses to strikes by predators is why these fish became such easy prey," said collaborator Dr Andy Radford, University of Bristol.

The team of scientists, which included Australian and Canadian researchers specialising in predator¬-prey interactions and bioacousticians from the University of Bristol, combined laboratory and field experiments, using playbacks and real boat noise, to test the impact of motorboat noise on survival of young Ambon damselfish during encounters with their natural predator the dusky dottyback.

Rather than being despondent, the team is optimistic about the possibilities for management of noise and its potential impact. "If you go to the Great Barrier Reef, there is a lot of noise from motorboats in some places. But unlike many pollutants we can more easily control noise. We can choose when and where we make it, and with new technologies, we can make less noise. For example, we could create marine quiet zones or buffer zones, and avoid known sensitive areas or times of year when juveniles are abundant," said Dr Simpson.

Managing local environmental stressors such as noise is an essential first step in protecting the marine environment. "You might argue that climate change is a bigger threat to reef life, but if we can reduce the effect of local noise pollution we build greater resilience in reef communities to looming threats such as global warming and ocean acidification," said collaborator Dr Mark Meekan, Australian Institute of Marine Science. 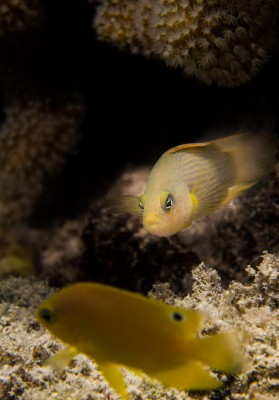 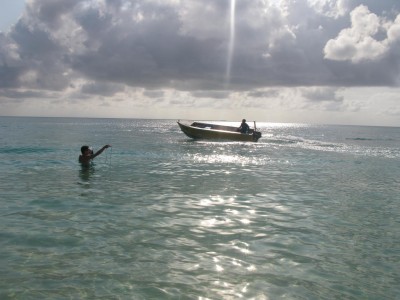