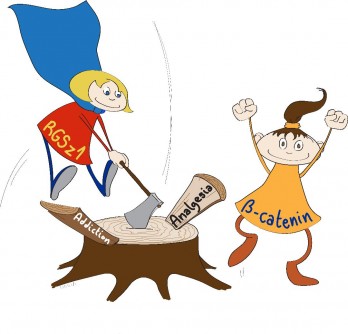 The protein, RGSz1 (Regulator of G protein signaling z1), which is expressed in brain regions that mediate analgesic responses, is part of an intracellular network that controls the pain-relieving effects of opioid analgesics like morphine, fentanyl, and methadone without increasing the risk of reward or dependence, according to the study conducted in mouse models at the Icahn School of Medicine at Mount Sinai and published February 12 in Proceedings of the National Academy of Sciences.  The mechanisms uncovered in this study may provide novel avenues for pharmacological interventions that can be used to optimize the actions of opioid medications, leading to safer and less addictive treatments.

Opioids are powerful analgesics, but when they are used long-term, they promote dependence and can easily transition to addiction.  Patients who receive opioids for chronic pain require higher amounts of the drug over time as they develop analgesic tolerance. The need for higher amounts not only results in severe and often life-threatening adverse effects, but it also increases the risk for dependence and addiction. Amidst the current opioid crisis in the United States, there is an immediate need to develop novel therapeutic interventions for safer and more efficient analgesics.

The development of safer opioids is challenging because opioid receptors are expressed throughout the brain and not just in the cells mediating pain relief.  The Mount Sinai research team targeted an intracellular network that controls the actions of opioids primarily in the periaqueductal gray, a brain region that plays a critical role in analgesic responses. Using genetic mouse models for global or brain region-targeted manipulation of RGSz1 expression, Mount Sinai researchers identified RGSz1 as a negative modulator of opioid analgesia, and a tolerance-promoting factor.  Mice that lacked the gene responsible for encoding RGSz1 (RGSz1 knockout mice) responded to significantly lower doses of opioids to achieve pain relief.  Furthermore, when RGSz1 activity was blocked, opioids were less rewarding, providing further evidence that RGSz1-controlled pathways may be targeted to optimize the therapeutic actions of opioids.

“Our discovery that RGSz1 and RGSz1 regulated pathways can be targeted to promote analgesia is very exciting because it enables us to develop strategies for the use of low opioid doses for pain relief,” says Venetia Zachariou, PhD, Associate Professor in the Fishberg Department of Neuroscience, the Department of Pharmacological Sciences, The Friedman Brain Institute, and The Addiction Institute, Icahn School of Medicine at Mount Sinai.

Additionally, the research team discovered that RGSz1 competes with another RGS protein, Axin 2, and this competition controls the function of the protein β-catenin.  β-catenin plays an important role in opioid actions by promoting the expression of genes that counteract the maladaptive changes associated with analgesic tolerance.  This is another factor uncovered in this study that provides insight about the cellular and molecular pathways that mediate the actions of opioids in specific brain regions or cell types, which is essential for the development of safer therapeutics for analgesia or addiction.

“RGSz1 is expressed only in subsets of neurons that mediate opioid actions. The actions of opioids in addiction-related networks are mediated by distinct RGS proteins. We are now screening currently prescribed opioids as well as new compounds to determine their abuse potential and analgesic efficacy based on the RGS protein they activate. That knowledge will be power in the fight against this deadly opioid epidemic,” says Dr. Zachariou.

Researchers from UT Southwestern Medical Center contributed to this research.

About the Mount Sinai Health System
The Mount Sinai Health System is New York City’s largest integrated delivery system encompassing seven hospital campuses, a leading medical school, and a vast network of ambulatory practices throughout the greater New York region. Mount Sinai’s vision is to produce the safest care, the highest quality, the highest satisfaction, the best access and the best value of any health system in the nation. The System includes approximately 7,100 primary and specialty care physicians; 10 joint-venture ambulatory surgery centers; more than 140 ambulatory practices throughout the five boroughs of New York City, Westchester, Long Island, and Florida; and 31 affiliated community health centers. Physicians are affiliated with the renowned Icahn School of Medicine at Mount Sinai, which is ranked among the highest in the nation in National Institutes of Health funding per investigator. The Mount Sinai Hospital is ranked No. 18 on U.S. News & World Report’s “Honor Roll” of top U.S. hospitals; it is one of the nation’s top 20 hospitals in Cardiology/Heart Surgery, Diabetes/Endocrinology, Gastroenterology/GI Surgery, Geriatrics, Nephrology, and Neurology/Neurosurgery, and in the top 50 in four other specialties in the 2017-2018 “Best Hospitals” issue. Mount Sinai’s Kravis Children’s Hospital also is ranked in six out of ten pediatric specialties by U.S. News & World Report. The New York Eye and Ear Infirmary of Mount Sinai is ranked 12th nationally for Ophthalmology and 50th for Ear, Nose, and Throat, while Mount Sinai Beth Israel, Mount Sinai St. Luke’s and Mount Sinai West are ranked regionally. For more information, visit http://www.mountsinai.org/, or find Mount Sinai on Facebook, Twitter and YouTube.