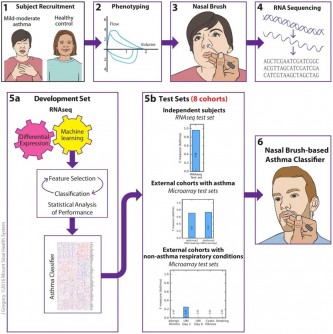 Study flow for the identification of a nasal brush-based classifier of asthma by machine learning analysis of RNAseq data.

Newswise — (New York, NY – Jun 11, 2018) – Mount Sinai researchers have identified a genetic biomarker of asthma that can be tested for using a simple nasal brush and basic follow-up data analysis. This inexpensive diagnostic test can accurately identify mild to moderate asthma and differentiate it from other respiratory conditions such as allergic rhinitis, smoking, upper respiratory infection, and cystic fibrosis. The research team, led by a collaboration of clinical and computational scientists in the Department of Genetics and Genomic Sciences, the Icahn Institute for Genomics and Multiscale Biology, and the Department of Pediatrics at the Icahn School of Medicine at Mount Sinai, published their results in June 2018 in Scientific Reports.

“Mild to moderate asthma can be difficult to diagnose because symptoms change over time and can be complicated by other respiratory conditions,” said Supinda Bunyavanich, MD, physician and researcher at the Icahn School of Medicine. “Our nasal brush test takes seconds to collect. For time-strapped clinicians, particularly primary care providers at the front lines of asthma diagnosis, this could greatly improve patient outcomes through early and accurate diagnosis.”

Currently, pulmonary function testing (PFT) is the most reliable diagnostic tool for asthma. However, the equipment and expertise needed to perform these tests are not always available in primary care settings where asthma is frequently diagnosed and treated. It is also difficult to differentiate between asthma and other respiratory diseases using PFT alone, while the nasal brush and subsequent analysis for this asthma biomarker provides a binary result of asthma or not asthma.

Data scientists leading the study applied machine learning algorithms to the genetic (RNA) data acquired from nasal brushes of patients with and without asthma. This robust data collection, and machine learning analysis, identified a 90-gene biomarker indicative of asthma status. “One of the most exciting components of this study is demonstrating the power of machine learning when applied to biomedical data,” said Gaurav Pandey, PhD, who led data science efforts to develop the biomarker. “Collaborations between computational scientists and biomedical researchers and clinicians are advancing medicine at an inspiring pace. We have the power of many insights we didn’t have in the past, and that opens a window to an entirely new world of diagnostic tools and treatments”

Dr. Bunyavanich says the next step to bringing this test into clinical practice is a study in a larger population of patients. “With prospective validation in large cohorts, our asthma biomarker could lead to the development of a minimally invasive test to aid asthma diagnosis at clinical frontlines where time and resources often preclude pulmonary function testing.”

Asthma affects 10 percent of children and adults in the United States. When undiagnosed, it can lead to restricted activity, emergency room visits, and hospitalizations. “We’re hopeful that further studies can help bring this test into primary care settings, transforming the ease and accuracy of diagnosing asthma and our ability as doctors to appropriately treat our patients,” said Dr. Bunyavanich.

About the Icahn School of Medicine at Mount Sinai

The Icahn School of Medicine at Mount Sinai is an international leader in medical and scientific training, biomedical research, and patient care. It is the medical school for the Mount Sinai Health System, which includes seven hospital campuses, and has more than 5,000 faculty and nearly 2,000 students, residents and fellows. The School is made up of 36 multidisciplinary research, educational, and clinical institutes and 33 academic departments. It ranks 13th among U.S. medical schools for NIH funding and 2nd in research dollars per principal investigator among U.S. medical schools by the Association of American Medical Colleges (AAMC). The School was named 4th among "World's Most Innovative Companies in Data Science" by Fast Company magazine in 2016. For more information, visit http://icahn.mssm.edu

The Mount Sinai Health System is New York City’s largest integrated delivery system encompassing seven hospital campuses, a leading medical school, and a vast network of ambulatory practices throughout the greater New York region. Mount Sinai’s vision is to produce the safest care, the highest quality, the highest satisfaction, the best access and the best value of any health system in the nation. The System includes approximately 7,100 primary and specialty care physicians; 10 joint-venture ambulatory surgery centers; more than 140 ambulatory practices throughout the five boroughs of New York City, Westchester, Long Island, and Florida; and 31 affiliated community health centers. The Icahn School of Medicine is one of three medical schools that have earned distinction by multiple indicators: ranked in the top 20 by U.S. News & World Report’s “Best Medical Schools”, aligned with a U.S. News & World Report’s “Honor Roll” Hospital, No. 13 in the nation for National Institutes of Health funding, and among the top 10 most innovative research institutions as ranked by the journal Nature in its Nature Innovation Index. This reflects a special level of excellence in education, clinical practice, and research. The Mount Sinai Hospital is ranked No. 18 on U.S. News & World Report’s “Honor Roll” of top U.S. hospitals; it is one of the nation’s top 20 hospitals in Cardiology/Heart Surgery, Diabetes/Endocrinology, Gastroenterology/GI Surgery, Geriatrics, Nephrology, and Neurology/Neurosurgery, and in the top 50 in four other specialties in the 2017-2018 “Best Hospitals” issue. Mount Sinai’s Kravis Children’s Hospital also is ranked in six out of ten pediatric specialties by U.S. News & World Report. The New York Eye and Ear Infirmary of Mount Sinai is ranked 12th nationally for Ophthalmology and 50th for Ear, Nose, and Throat, while Mount Sinai Beth Israel, Mount Sinai St. Luke’s and Mount Sinai West are ranked regionally. For more information, visit http://www.mountsinai.org/, or find Mount Sinai on Facebook, Twitter and YouTube.