6-Mar-2018 2:05 PM EST, by University of Alabama at Birmingham
favorite_border 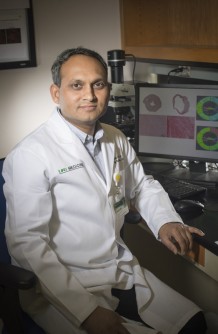 Newswise — BIRMINGHAM, Ala. – While mice can heal after a severe heart attack, an attack of the same severity in humans often launches a later descent into heart failure and death. Thus, study of the mouse healing may reveal therapeutic targets that can help humans avoid or delay the lingering inflammation that leads to heart failure.

The design of such a study is complex. It needs to follow the time course of inflammation and its resolution in the mouse after a heart attack. Is also needs to do this, not just at the dead-muscle site of the heart attack, but also in the spleen, a small organ in the upper abdomen. The spleen — as mounting research shows — plays a leading role in the immune response to a heart attack.

In a paper published in Science Signaling, University of Alabama at Birmingham researcher Ganesh Halade, Ph.D., and colleagues at UAB and Brigham and Women’s Hospital, Boston, have detailed this time course for the heart and spleen. Their study looked at the types and numbers of immune cells involved; the types and amounts of lipid signaling compounds — which are called specialized proresolving mediators, or SPMs — produced at both sites; the expression of the enzymes that produce SPMs or other inflammation signaling compounds at both sites; and the determination of which enzymes are key to resolution of inflammation. The study also detailed heart function, histology and size of the dead-muscle, or infarcted, area; and the amounts and types of proresolving cytokines produced. The three time points for the study were before the heart attack, and at one day or five days after the heart attack.

Two major findings were: 1) The active resolving phase after heart attack coincides with the acute inflammatory response that facilitates cardiac repair after a heart attack; and 2) macrophages, a type of white blood cell, are necessary for SPM generation, as opposed to other immune cells like neutrophils. Altogether, Halade says, the results highlight a need for further investigation of macrophage-derived SPMs in heart failure.

Halade is an assistant professor in the UAB Department of Medicine’s Division of Cardiovascular Disease.

Study details
The spleen is a storage area for white blood cells, the general name for leukocytes. After a heart attack, leukocytes from the spleen speed to the infarcted area of the heart to remove dead tissue and start repairs.

By day one in the animal studies, Halade and colleagues found there was differential expression, between the infarcted left ventricle of the heart and the spleen, for enzymes that produce resolving bioactive lipids. Three lipoxygenase enzymes that produce SPMs increased in the infarcted left ventricle of the heart by day one, and two of them continued to increase by day five. In contrast, expression of two cyclooxygenase enzymes, which produce prostanoids, increased in the spleen.

The increased expression of lipoxygenases by splenic leukocytes in the left ventricle coincided with production of a specific subset of bioactive SPMs, including the D-series resolvins, maresin protectins and lipoxins.

Experimental depletion of macrophages in the spleen and left ventricle using clodronate, which selectively kills macrophages, reduced both expression of lipoxygenases and generation of SPMs. This showed that macrophages produced most of the SPMs during the acute healing in the left ventricle.

Co-authors with Halade on the paper, “Splenic leukocytes define the resolution of inflammation in heart failure,” are Paul C. Norris and Charles N. Serhan, Brigham and Women’s Hospital; and Vasundhara Kain and Kevin A. Ingle, UAB Division of Cardiovascular Disease, UAB Department of Medicine.