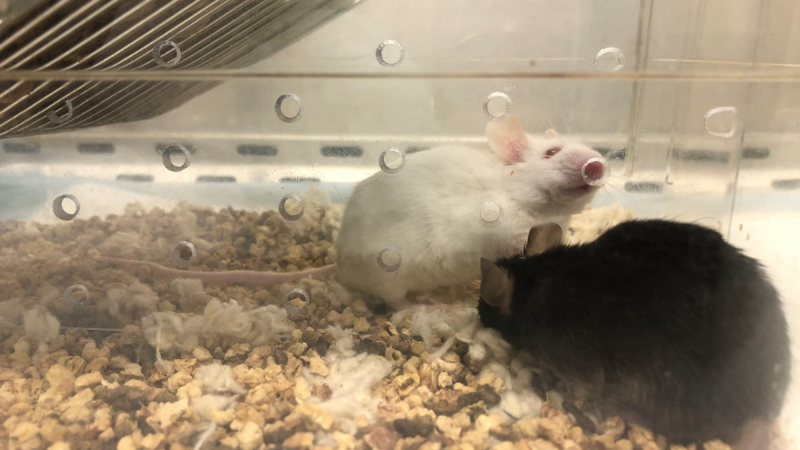 In this social defeat test, the black mouse is submissive to the aggressive white mouse.

Newswise — In experiments with mice, researchers at Johns Hopkins Medicine report a promising advance in the search for a new class of drugs to treat major depression. A compound developed by the Johns Hopkins Drug Discovery Group targets a chemical in specific cells of the mammalian brain, and eases signs of social avoidance and depression in rodents, without some of the toxic side effects that have bedeviled its parent compound.

Most of the antidepressant drugs on the market target serotonin or norepinephrine neurotransmitters—chemical messengers in the brain—but these medications don’t work for some people with depression. They also can take four weeks or more to fully take effect. The new experimental compound, dubbed JHU-083, targets the neurotransmitter glutamate, and in a report published in the March issue of the journal Neuropsychopharmacology, the researchers say its effects appear in mice much quicker.

“From a therapeutic perspective, the drug’s action is against very specific brain immune cells, namely microglia involved in many types of neuro-inflammation and linked to neurodegeneration,” says Atsushi Kamiya, M.D., Ph.D., associate professor of psychiatry and behavioral sciences at the Johns Hopkins University School of Medicine. “We hope that this means it will have a wide range of therapeutic possibilities in many brain diseases associated with neuro-inflammation.”

Recently, experiments in animals and humans have shown that too many glutamate messages in the brain, in addition to other well-known factors, likely play a role in major depression too. As a result, the search for chemical compounds that reduce glutamate has heated up. Ketamine, an anesthetic and illicit “date rape drug” or “party drug,” is believed to act on glutamate and has been heavily touted as a treatment for depression, which led to the opening of ketamine clinics to treat resistant depression. But, ketamine also produces abrupt and lengthy “highs,” bad hallucinations, nausea, addiction and high blood pressure.

As a result, the Johns Hopkins researchers and others have sought drugs that have similar antidepressant properties without the unwanted side effects.

The team derived their new compound from a chemical called DON (short for 6-Diazo-5-oxo-L-norleucine), first found in bacteria in Peruvian soil in the 1950s. It has long been known to block glutamine metabolism, but was toxic to experimental animals, mainly causing gastrointestinal toxicity. The gut uses a lot of glutamine, and it is also an amino acid building block for proteins.

To circumvent the toxicity, the researchers made a prodrug of DON, essentially a pre-version of the drug that is inactive, by adding two different promoeities: ethyl and 2-(2-Amino-4-methylpentanamido).

“Our prodrug was designed to circulate in plasma (blood) intact and inert, but be cleaved to the active drug DON in the brain, thus improving its tolerability profile,” says Barbara Slusher, M.A.S., Ph.D., professor of neurology and director of Johns Hopkins Drug Discovery at the Johns Hopkins University School of Medicine. “Once cleaved in the brain, JHU-083 liberates DON, which resembles glutamine that can be converted into the neurotransmitter glutamate. But unlike glutamine, DON contains a chemical warhead that covalently binds to glutamine-dependent enzymes such as glutaminase and prevents them from functioning normally,” she adds.

To test the compound, the researchers used a mouse model with outward and measurable signs of stress by avoidance of social interactions and preference to being alone by using a standard lab “social defeat” habitat. Normally, mice are social and like to explore and check out new mice in their surroundings, movements that can be measured by time spent sniffing noses or tails. But for the social defeat experiments, they place a mouse in a cage with a bigger, “bully” mouse for 10 minutes a day for direct interaction and then keep them separated by Plexiglas in the same cage for 24 hours. The bully mouse may show aggression and dominance. They use a new bully mouse each day for 12 days in a row, and over time the bullied mouse become persistently submissive by no longer being curious and social and instead preferring to be alone in an empty corner. Control mice are placed in similar cages without bully mice.

In the second phase of the experiment, the bullied mice were fed JHU-083 each day for 12 days. Control mice were fed a solution that didn’t contain the drug.

Next, the mice were presented with new, “stranger” mice in their cages, or an empty space.

For the next set of experiments, the researchers wanted to see if they could detect the drug working in the brain after the same set of social defeat experiments. They set up the experiments with the bully mice for 12 days and did the same 12-day dosing of JHU-083 using the same controls as before.

Then they took cells from the mice prefrontal cortexes (the thinking part of the brain); the hippocampi, which are regions of the brain thought to play a role in depression; and the cerebellums, the areas of the brain that control balance. They separated out the microglial cells from the rest of the cells in the brain and tested both sets of cells for glutaminase activity—that enzyme that makes the glutamate from glutamine—using a test that measures how much newly made radioactive glutamate is made from radioactive glutamine.

“The coolest thing we found with respect to how the compound works is that it targets only microglial cells—immune cells—in the brain,” says Kamiya. “This was surprising since the drug’s target, glutaminase—an enzyme that generates glutamate is found all over the brain.”

Anytime a drug has a cell-specific target, it is likely to be more effective with fewer side effects.

For future work, the researchers want to see why glutaminase only gets elevated in the microglial cells after stress and why their drug only seems to work in these cells even though the enzyme that they act upon is found throughout the brain.

Slusher co-founded a company called Dracen Pharmaceuticals, which has licensed the prodrugs developed by her team at Johns Hopkins Drug Discovery for development and commercialization.

This research was supported by grants from sources including the National Institute on Drug Abuse (R01DA041208), the National Center for Complementary and Integrative Health (R21AT008547), the National Institute of Mental Health (P50MH094268, P30MH075673 and R25MH080661), the National Cancer Institute (R01CA193895), the Catalyst Award, The Brain and Behavior Research Foundation, Bloomberg~Kimmel Institute for Cancer Immunotherapy, postdoctoral fellowship in pharmacology/toxicology from the PhRMA foundation, TEDCO Maryland Innovation Initiative grant award, and the Institute of Organic Chemistry and Biochemistry of the Academy of Sciences of the Czech Republic, v.v.i (RVO 61388963).